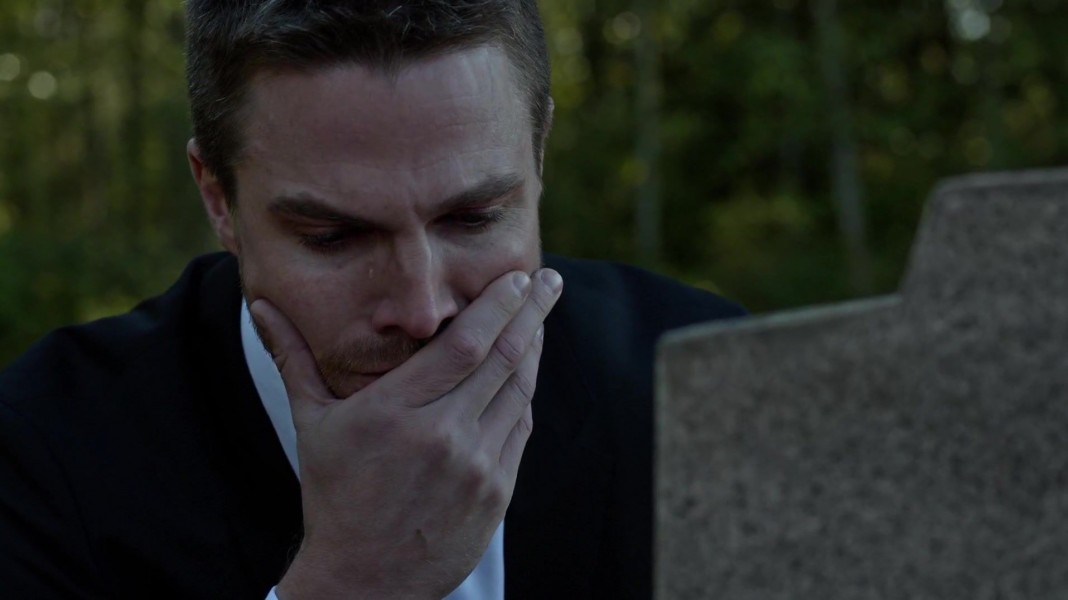 Check out Our Review [WITH SPOILERS] of Arrow Season 4 Episode 18: “Eleven-Fifty-Nine.”

As fans everywhere wonder who Negan beat to death on the season finale of The Walking Dead, at least they found out who (might) lay in that ominous grave on Arrow. And you know what? Unfortunately, it is all a bit silly.

Stephen King once said that if a story gets too tragic, all semblance of drama is lost, and in truth Arrow comes real close to that drama-limit this week. Most of this week’s drama centers on Andy Diggle and his loyalties. Oliver thought that the young Diggle brother was loyal to Damien Darhk while John Diggle insisted his little bro was true blue. Well, of course Andy is a poop-heel as he betrayed Team Arrow during Darhk’s prison break.

Through the endless and nonsensical flashbacks, we learned about the origins of Darhk’s evil idol, and while I dug the introduction of magic into the CW (Zatanna, please do Zatanna), everything just seemed kind of haphazardly put together. You see, Team Arrow reassembled the idol but left out a single piece. Instead of just, you know, throwing the whole darn thing in the ocean or something, they kept the idol in a glass case, basically with a blinking sign that says, “Please Steal Me.” Well, Malcolm Merlyn did just that and smuggled the evil head idol to Darhk.

You see, the evil head gives its wielder super-powers if they make a blood sacrifice. Darhk did just that, and he and fifty Iron Heights inmates escaped but not before Darhk stabbed Laurel Lance with one of Oliver’s arrows. So the team was betrayed by a guy that clearly isn’t loyal, Diggle gave his brother (who has been a good guy for like a day) the location of the missing idol piece, and Laurel was mortally stabbed. It’s like the episode went out of its way to make the heroes look dumb.

As first, it looked like Laurel would recover, but after Oliver promised her something left unrevealed, she flat-lined. Now, it all kind of seemed like a ruse, one of Oliver’s long game plans so don’t say goodbye to Laurel just yet, but, and this is where that Stephen King quote comes in, it just all has no impact because it’s just tragedy after tragedy after tragedy. When Quentin Lance came in and collapsed to the floor in grief, it just seemed silly. This was the third time Lance mourned a daughter and they always came back. It’s all paint by numbers and quite frankly, this show needs to be better. It certainly has been in the past.

Hey. At least the fight scenes were cool.