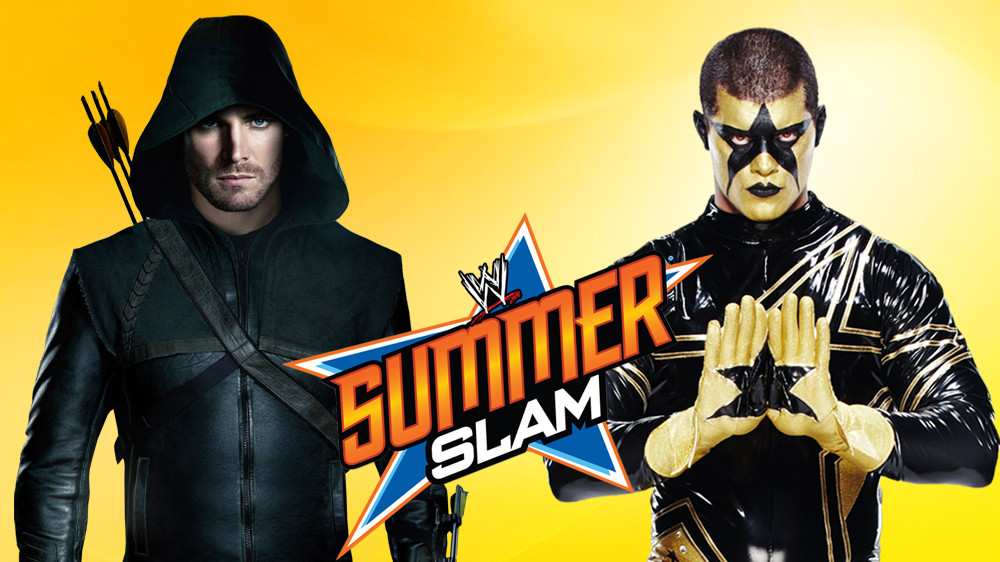 This Sunday, August 23, 2015, hosts the spectacle of superpowers known as the SummerManiaWrestleSlam! Well, not really, but it does host an event second only to WrestleMania, and that is WWE SummerSlam. But this is The Source, why am I reading a wrestling article, you might ask? Because what would the biggest event of the summer be without a little extra star-studded power? As comic fans, we are used to seeing the crossover, and this time the world of comics is crossing over into the squared circle. Arrow star Stephen Amell will be in a match this Sunday against the son of Dusty Rhoads, Stardust.

The feud began a few months back when Amell attended a WWE event. Stardust seemed to take offense to his attendance and engaged Amell in a stare-down for the ages.

You see, apparently Stardust knows Stephen’s secret and Stephen doesn’t like that, being that it’s a secret and all, and they’re gonna fight about it! Wrasslin’! The last time we saw Amell and Stardust face to face, the Arrow star was massaging Stardust’s face with his fists.

After these events, Arrow Vs Stardust was turned into a tag-team match involving Adrian Neville and King Barret, because, why not?  What will happen this Sunday? Is anyone excited about this? Is this something you would like to see more of in the future? Cool concept or lame with a capital “L”? What superheroes would you like to see face off in the ring? Remember that time Sting teamed with RoboCop? Remember??? Anyway, sound off in the comments section below and get ready for Sunday! Sunday! Sunday!