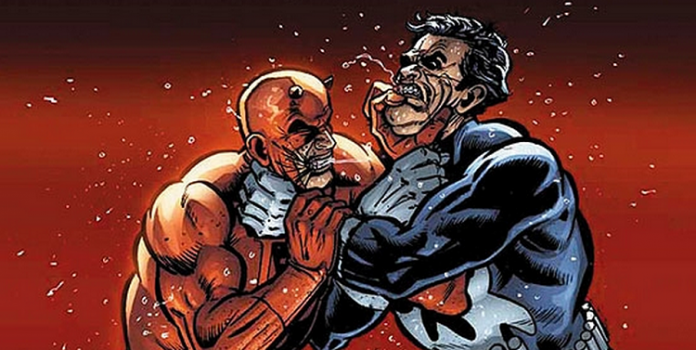 The gang at Nelson and Murdock – Foggy Nelson (Elden Henson), Matt Murdock (Charlie Cox) and Karen Page (Deborah Ann Woll) – return to represent the destitute, desperate and downtrodden denizens of Hell’s Kitchen. And if cleverly executed legal strategies aren’t effective, there’s always the Daredevil option; this is the option where Daredevil curb-stomps especially violent ne’er-do-wells after they exploit ambiguous legal premises, released to mash more crap into the face of Lady Justice. Yes, they escaped lawful ramifications, but how about the moral ones? The just ones? No, hence the Daredevil option.

Of course, Daredevil Season 2 will introduce another individual embodying more robust methods of applying said ramifications: Frank Castle, aka The Punisher. Not only does The Punisher (Jon Bernthal) assail with violence, he assails with violence brought to its utmost, irreversible conclusion: DEATH! Yes, there’s a reason why he fancies the skull motif.

Daredevil showrunners Doug Petrie and Marco Ramirez have often referred to Daredevil Season 2 as ‘Daredevil vs The Punisher,’ so we’re super-excited to see these
two defective, determined individuals throw-down on the small screen. Of course, this won’t be the first time Daredevil and The Punisher beat the living potatoes out of each other. No, sir; Daredevil and The Punisher have been butting heads, literally and ideologically, for years in the canonical Marvel comics. Yes, their conflict dependably expresses itself physically, but there are ideas at war here: is violence really the answer? If so, how much is necessary; an amount equal to the crime? And is execution – in the name of guaranteed safety or deserved retribution – a natural right held by mankind, or another act of unforgivable murder? Hopefully Daredevil and Punisher will howl out these profundities while kicking the living sh*t out of each other. Trust me, it’ll make for good TV.

“He’s Back!” So Says Loki [New Image from Thor: Ragnarok!]