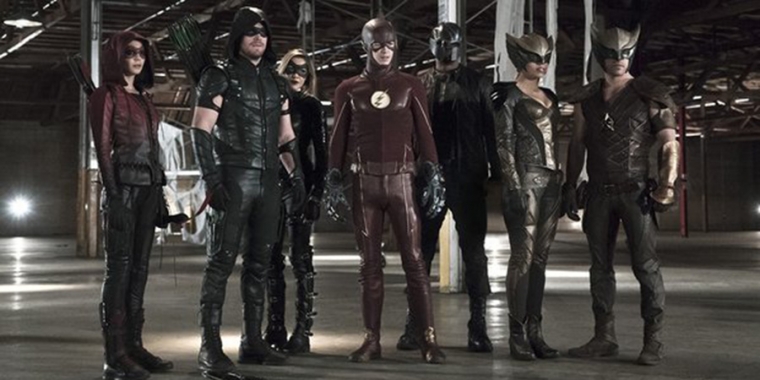 Check out Our Review [WITH SPOILERS] of The Flash Episode 8: “Legends of Today!”

Well, The Flash episode 8 was – packed. Not in my wildest dreams did I ever think I would see Hawkman versus Green Arrow – in live action – on prime time television. But there they were, fighting and snarking right on my television just like they did in so many old school issues of Justice League of America. And you know what? The set up was there, and the heart was there, as DC delivered on the biggest TV superhero event ever.

But how did it all begin? It started with the TV debut of one Vandal Savage who came across as totally badass if not a bit derivative of Ra’s Al Ghul. But to be fair Savage and Ra’s do have a great deal in common. Savage came across a bit more thuggish than the Demon’s Head which adheres to the villain’s comic book history. After all, Savage used to be a caveman before he gained his immortality.

Savage had arrived and was after one Kendra Saunders, the new love interest of Cisco Ramon. Making Kendra a love interest of Cisco is a wise move because it automatically makes fans care about the new arrival to Central City. After all the acts of bravery Cisco performed, after all the times Cisco had made fans laugh, it is just natural we want to see the brilliant and very human scientist get a win. And Kendra could be that win if it wasn’t for the fact that Vandal Savage was out to kill her AND if it wasn’t for the fact that she was really a reincarnated Egyptian princess who returns every generation from the grave just to be murdered by Savage again. Eessh, and you thought your love life was complicated.

It’s probably too bad for Cisco that he has to compete with Hawkman for Kendra’s love and the classic super hero in question was introduced in The Flash episode 8. Hawkman and Hawkgirl have one of the most incomprehensibly complex back stories of any mainstream comic book character. Trying to figure out their history is like trying to do a complex algebra problem, while counting sand, juggling otters, and cooking a quiche. But the series was able to look to the classic Geoff Jones take on the characters, the idea that they are reincarnated every generation to be champions and lovers until they are murdered by an adversary again and again. I wasn’t sure about Caira Renee as Hawkgirl when she first appeared, she was a bit vacant and wooden as Cisco’s favorite barista but as Hawkgirl, wow. She is every bit as impressive and regal as the hero is supposed to be and I look forward to watching her become the iconic hero that so many generations have fallen in love with.

But to do that she will have to survive and Vandal Savage isn’t going to make that easy. Good thing she has Team Arrow AND Team Flash (as well as her newly arrived eternal beau Hawkman) to fight by her side. During last year’s Flash and Arrow crossover event, I complained because it seemed the writers tried to find artificial reasons to create friction between Barry and Oliver. That instead of a true brave and bold team-up, fans were treated with a two part teeth gnashing session as the two heroes constantly measured the size of their shafts and their lightning bolts. This year, we got to witness a true gathering of heroes as fans got to see the largest collection of TV heroes ever (don’t sue me, Marvel) assembled. You had Flash, Green Arrow, the Hawks, Vibe, Diggle, Speedy, and Felicity. Every hero had something to do (even if it just was throwing up like Diggle) and it was fun to watch the interactions between actors that clearly were having a blast being part of this heroic ensemble. We were treated to some awesome interactions between Barry and Felicity, Oliver and Barry (as Barry marveled at how bright and hopeful Oliver has become), and Thea and Cisco (“My conditioner game is on point!”-awesome). If this is how all the champions are going to be juggled on Legends of Tomorrow, we are certainly in for a fun ride when that series hits in January.

So our heroes held Savage at bay for now. My only minor complaint was the way Malcolm Merlyn was used this week. Merlyn’s only function was to provide shadowy and vague warnings to the heroes about the vicious legacy of Vandal Savage. And while those warnings did indeed sound dire, he would just dramatically appear with a cadre of ninjas and drop his Malcolm Merlyn knowledge. What? Do Merlyn and the ninjas just wait outside by a food truck until it is dramatically appropriate to make their entrance? It was very, very silly and even Barry commented on it, but that aside, man, was this a fun episode. And even with a huge cast of heroes running, flying, and ‘vibing’ around, the whole thing somehow felt like a very Flash-centric story.

Speaking of Flash-focused happenings; we got a side story this week that saw Patty Spivot shooting the Earth 2 Harrison Wells. Wells was working on a formula called Velocity 6 to help Barry get more speed so he might defeat Zoom. When Wells was shot (and poor Patty, she just needs to be told what’s going on), Jay Garrick took the drug to momentarily gain his speed back so he could remove the bullet from Wells’ lung. I’m sure Velocity 6 will play a huge role on The Flash moving forward and Wells’ dire injury served as a nice dramatic counterpoint to the light and breezy superhero action in the episode’s A story.

And the best part is, we get to continue it all tonight on Arrow.

Death of X #1 Review: And the First Casualty Is….