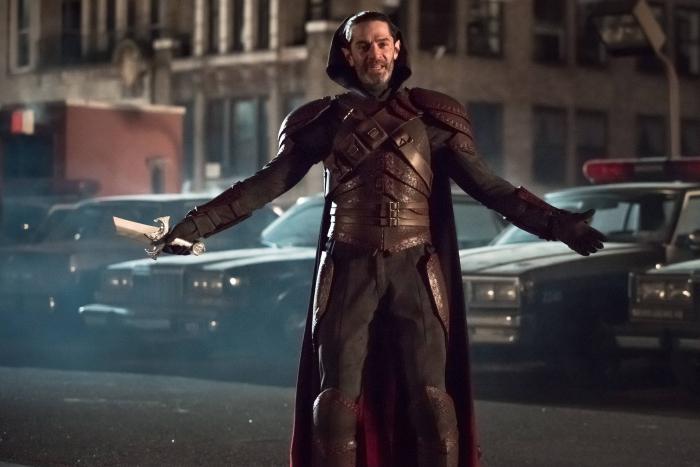 Check out Our Review [WITH SPOILERS] of Gotham Season 2 Episode 20: “Unleashed.”

Azrael arrives. And then goes away very quickly on this week’s episode of Gotham.

Including Azrael on Gotham is a strange move. The character isn’t exactly front and center when it comes to the Batman mythos. Yeah, the concept was vitally important in the 90s, but the Order of Saint Dumas isn’t exactly an iconic element of the Bat-verse.

Well, it is Butch that fires the bazooka in question, but it is at the Penguin’s behest. This blowing up in question happens while Azrael is trying to killing Bruce Wayne. Gordon and Alfred come to the rescue but cannot take the enhanced Galavan down. Luckily Penguin, still driven by revenge for his mother, shows up with Butch and the bazooka.

And really, Penguin is just awesome. Show-saving-level awesome. This week’s episode just wasn’t that great until Penguin showed up. The episode was busy but dull – Galavan’s sister got stabbed by Azrael, we were forced to endure lots of exposition about Azrael like it mattered, and Butch had an inexplicable moment of turbulent emotions while standing over Galavan’s comatose sister. Do we really need to know the inner heart of Butch? Really? Well, I guess we do if he’s going to blow up Penguin with a bazooka.

Bruce Wayne is also busy elsewhere this week as he has Selena Kyle break into Arkham to find out exactly what Hugo Strange has been doing. Selena runs into an escaping Edward Nygma and sees what’s going down in Arkham’s basement as things get kind of American Horror Story: Asylum. Selena sees some of Strange’s more horrific creations and runs afoul of a fully armed and operational Firefly. Ok, that’s a cliffhanger-and-a-half leading to next week.

Speaking of next, week, why the heck would Fox give away the reveal that Fish Mooney survived and will be back next week? Kind of showing your hand there Gotham, no? Are you that desperate for ratings that you spoil your own surprises? Jeez.

Anyway, some dopey and harmless fun from Gotham this week as the Penguin takes out one of the season’s more ponderous plotlines with one blast from Butch’s Bazooka.

First Look at the Assembled Justice Society from Legends of Tomorrow Season 2!

Growing up with Star Wars: Childhoods of Long Ago Spent in Galaxies Far Away

Guardians of the Galaxy Retro Review: The Road to Civil War Part 4