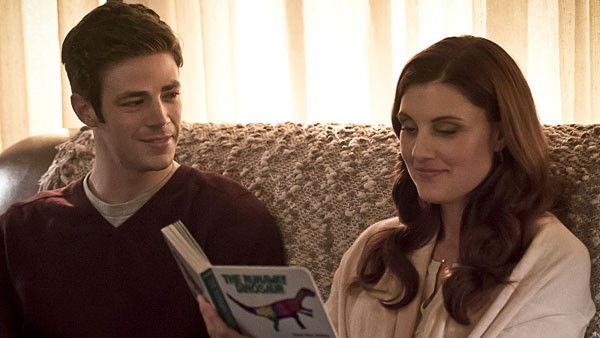 Check out Our Review [WITH SPOILERS] of The Flash Season 2 Episode 21: “The Runaway Dinosaur!”

Sadly, fans of The Flash did not get to see Barry Allen go up against a runaway T-Rex on this week’s episode. Judging from the title, I had hopes of seeing some speedster versus Jurassic action. But I can’t complain too much because we do get an action-packed and heartfelt journey into Barry’s psyche as the hero quests to get his speed back.

Last week, we saw Barry get sucked into the second particle accelerator as he tried to kick-start his speed in order to save Kaitlin Snow from Zoom. This week, we discovered that Barry was shunted into the Speed Force itself and now, he has to defeat his own subconscious fears in order to return to reality and save the world.

Things get very Grant Morrison-like, metaphysical, and spirit-quest-y this week as Barry communicates directly with the Speed Force, a malevolent, universal energy that has chosen Barry to be its champion. The Speed Force takes the form of Joe, Iris, Henry, and finally Nora Allen in order to give Barry the mental boosts he needs to become a champion again. You see, Barry never fully came to terms with his mother’s death and has to confront his loss in order to run again. “The Runaway Dinosaur” is not an at-risk teen triceratops, it is a kids’ book that Nora used to read to Barry about the special bond between a mother and her child. It is a sweet reveal that has a ton of heart. After Barry deals with his Speed Force mom, he is ready to go home, speed and all.

Cisco is conveniently able to “vibe” into the Speed Force and he and Iris help Barry home. But things are not quiet on the home front because, and this is really awesome, a zombie version of Girder is awakened by the second particle accelerator. So now, Barry must use his newly regained speed to defeat the Iris-obsessed metal Walker (as long as we don’t have Team Flash kneeling in a circle around Negan, I’m good with it).

The episode is an emotionally charged journey into the consciousness of Barry Allen mixed with some fun zombie action-bits to keep things from getting too morose. Cisco’s reaction to zombie Girder is priceless, and while the defeat of Girder is a bit low budget (he basically just faints), it is still a fun, disposable challenge to test Barry’s regained speed.

As for the rest of the episode, we find out Jesse and Wally are still alive after getting caught in the particle accelerator explosion, but neither have manifested any metahuman gifts…yet. There is a spark from Jesse and I think before too long, Barry won’t be facing Zoom alone.

Speaking of Zoom, he brings an Earth-2 metahuman army over to Earth-1 and that seems to be the big threat to end the season. Pretty cool.

I would be remiss if I didn’t mention that this episode is directed by Kevin Smith. Like any good TV director, Smith fades effectively into the world of the show and uses the visual cues and directorial style that fits the established world of the series. He oversees a very quiet, introspective episode which fits the director’s usually realistic, grounded style. Of course, he shoehorns Jason Mewes into the proceedings, but that’s to be expected.

So, Barry has his speed back just in time to take on an army of villains. This should be good.