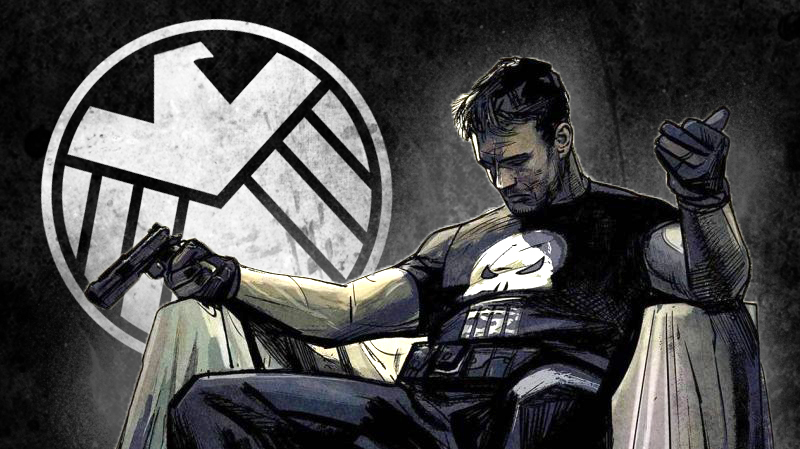 After Jon Bernthal’s riveting performance as The Punisher/Frank Castle in Daredevil Season 2, it was confirmed the story of Marvel’s brusque, skull-themed vigilante would continue in a future Netflix series debuting sometime in 2018. However, after a head-scratching tweet and a few additional developments, it seems Jon Bernthal’s Punisher might grace our TV screens a little earlier than expected through ABC’s Agents of SHIELD.

Due to his Netflix production schedule, @jonnybernthal will only be at #NYCC on Saturday and Sunday. More info: https://t.co/uMrzkxxJWM pic.twitter.com/Ro6nMfqvry

Now, he can’t possibly be filming anything for the aforementioned Punisher series, and there’s been no proof Defenders has entered into production. Is he making a guest appearance in Iron Fist? Hmmmmm. Maybe.

At a recent screening for the Agents of Shield Season 4 premiere, Marvel’s head of Television Jeph Loeb introduced a few special guests. Who joined him on stage? That would be comic book writer and artist Felipe Smith, creator of the Robbie Reyes Ghost Rider iteration, and Gerry Conway, who wrote the Punisher’s first appearance in The Amazing Spider-Man #129 waaaay back in 1974.

“You will understand why I brought all of these people here later in the season, and why it makes sense,” Loeb reportedly stated.

Hmm. A legendary Punisher creator joins with a modern Ghost Rider creator on the stage of an Agents of SHIELD season premiere. The head of Marvel TV says there’s a reason for surrounding himself with these particular creators, a reason that will be explained later, IN THIS VERY SEASON of Agents of SHIELD.

Jon Bernthal is filming…something. IS IT A GUEST APPEARANCE ON AGENTS OF SHIELD?

Remember, when AoS moved to the 10pm slot, creators said this would allow for a darker take on the series, and we’re seeing that with the inclusion of a brutal Ghost Rider murdering all manner of perps with extreme prejudice.

And Jeph Loeb has always championed the existing connectivity between Marvel films and TV series. Sure, we’ve gotten guest appearances from Nick Fury, Lady Sif and Maria Hill, but these appearances seem all too brief, and almost immediately unnecessary. A character like The Punisher, a Marvel/Netflix staple, crossing into network Marvel TV, could solidify the connection between every iteration of Marvel TV with the proper, Cinematic Marvel Universe. WHEW!

Anyway, yes, this is all speculative, but the evidence is certainly pointing to something unique. We’ll keep you updated as more information becomes available.

So, how about a little Punisher with your Agents of Shield?