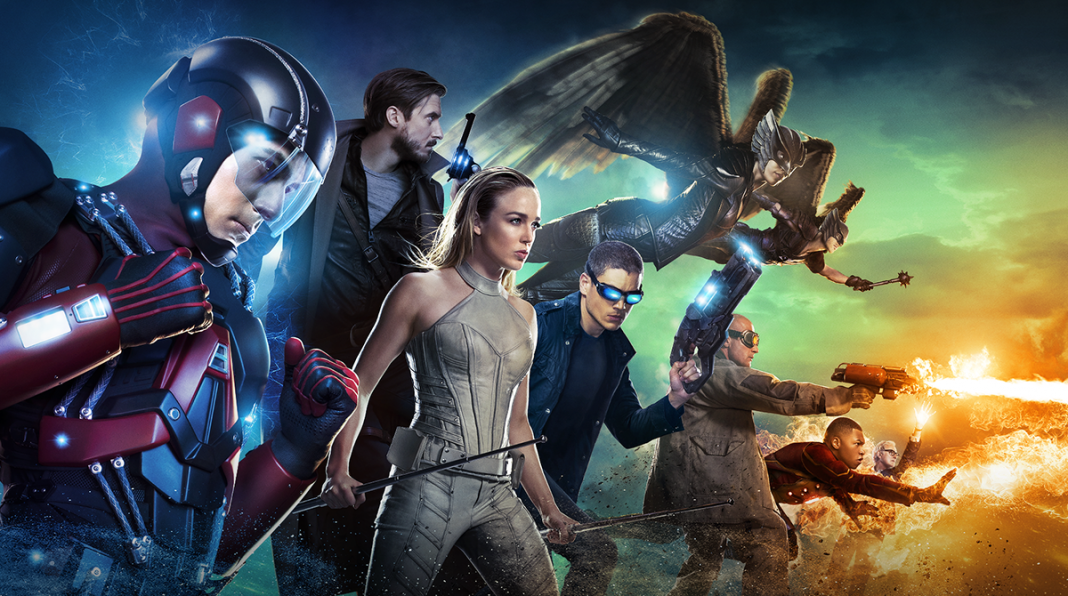 Check out Our Review [WITH SPOILERS] of Legends of Tomorrow Episode 1: “Pilot Part 1”

When Arrow debuted on the CW, it was pretty apparent that the series, initially at least, wanted to go the Smallville route with no powers, minimal costumes, and grounded in reality. Gradually, things began to change with more and more DC icons joining Oliver Queen and making Arrow into a weekly celebration of the DC Universe. Soon, Barry Allen debuted and spun off into The Flash, and powers were not only in play, they were celebrated. But now, with DC’s Legends of Tomorrow, we have something truly special. We have a celebration and spotlight on not one DC hero, but the entirety of the DC Universe past, present, and future. It’s kind of amazing that all this could have spun out of a show starring a dude with a bow, but here we are.

Legends benefits in a similar way to Marvel’s first Avengers film. In Avengers, fans already knew the backstory of each player so it was a gathering of old friends and familiar icons. In Legends, fans have already met all the players either on The Flash or on Arrow, so each major character, sans Rip Hunter, shows up fully formed. And of course, the writers know these characters. Some, like the Hawks, are relatively unexplored but others, like Sara Lance, have been the focus of entire seasons of TV. The characters are disparate, but somehow, the team dynamic works and is an absolute blast to watch.

The new team’s mission is pretty simple, to bring down Vandal Savage before he takes over the world at some time in the future. One of the most impressive plot gymnastics the show pulled off was establishing and world-building Rip Hunter’s timeline so darn quickly. Seriously, by the end of the first act, we understood everything about how this brand of time travel works. Well, not everything, as Hunter springs some game changing surprises on our Legends by episode’s end – surprises that force each hero and villain to look at each other very differently. So with that in mind, let’s take a look at each of our Legends.

First we have the glue that binds this seemingly random group of DC characters, the aforementioned Rip Hunter. Played by Doctor Who alum Arthur Darvill, Rip Hunter is like if you smashed the Doctor and John Constantine together at great speeds and were left with a swaggering bit of British loveliness. Hunter is a bit of an exposition monkey, but his presence makes the show seem big – like, really big. Who ever thought that one day, the Arrow-verse would spawn time travel? But here we are as Hunter brings our heroes their mission. Hunter is after perennial DC baddie Vandal Savage, the immortal villain that Team Flash and Team Arrow took down a few months back. Savage is wreaking havoc throughout history and it is up to Hunter to stop him. But this is very personal to Hunter and things may not be as they seem. At times, Hunter is a bit too close to the Doctor, but his connection to the DCU makes this character pretty special. When Hunter mentioned Per Degaton, I nearly plotzed.

Hunter’s first recruit was Ray Palmer, the Atom (Brandon Routh). Routh brings all his earnestness that made so many fans fall in love with him on Arrow. This Atom is very lost and still recovering from his “death” at the end of last season of Arrow. The brilliant inventor is trying to find a place in the world and is at a crossroads when Hunter arrives and gives the Atom purpose. We don’t get a great deal of Atom shrinkage, but this pilot episode does feature the debut of an old school Atom villain, the time-hopping Chronos, albeit in a very altered and more potent form than the villain who, in the comics, always tried to kill Atom using watch parts.

Joining the rudderless Palmer are Hawkman (Falk Hentschel) and Hawkgirl (Ciara Renée). The Hawks are still trying to come to terms with their new lives, with Kendra in particular reeling from the revelation that they are reincarnated Egyptian royalty. These two winged heroes are the only beings that can permanently harm Savage and this episode got very personal for both Hawks as, during their first mission, they met the child of one of their previous incarnations. The reincarnated Hawks are not an easy concept to execute, but the Legends pilot pulled it off with an elegant simplicity. The discovery of the adult son they never knew they had (he was a Vandal Savage expert by the by) really underscored the uniqueness of these two classic characters and also made the war with Savage very personal.

Then we have Professor Martin Stein (Victor Garber) and Jefferson ‘Jax’ Jackson (Franz Drameh), the duo still getting used to being Firestorm. When Hunter recruits them, it is young Jackson that is reluctant to play time traveling hero and Stein who wants to spring into action. Stein’s motivations are fascinating because he is being driven by the fact that he is not a young man and doesn’t have much time left to make an impact on the world. It’s not often one gets to see a more mature type of superhero so this is an interesting dynamic between the two halves of Firestorm.

Next we have Sara Lance (Caity Lotz), the former lover of Oliver Queen and recently resurrected assassin. Sara is even more lost than Palmer and is trying to find a purpose now that she has a second chance at life. There is a wonderful scene with Sara and Laurel Lance where Sara becomes White Canary. She is probably the most kickass member of the group and her interactions with some of her fellow legends are a blast, particularly, the most unlikely members of our group, Captain Cold (Dominic Purcell) and Heat Wave (Wentworth Miller).

Cold and Heat Wave are at their roguish best in the pilot serving as the Han Solos of the group. They both ground the really out there plot in a gritty reality and add some really effective comic relief. Cold’s constant smirk is priceless and Heat Wave is getting more character play on this show than he has thus far on The Flash. I have to give props to the costume department on Legend for somehow incorporating Heat Wave’s Silver Age look into his street clothes. These two are the wild cards and I can’t wait to see if they will become Legends or stay villains.

We also had some Ollie Queen action just as a reminder of where we came from to get us this far into the wonderful depths of the DC Universe. This show seems like it is going to be a potpourri of character types, time periods, conflicts, and comic history. It is a series that does not take its inspiration from any one element of the DCU but from a plethora of seemingly conflicting story arcs and ideas. There was a bit of pilot-itis in this first episode but there is certainly chemistry between the cast and an anything-is-possible feel to the plot. In other words, this was more of a getting the band together type of episode than a plot advancement type of episode but there is a ton and a half of ground work laid now that all the players are in place.

Most of all, for old school DC fans, there is a sense that this is just a loving tribute to 75 years of comic book history. This week, we got to visit 1975 and the sky is the limit for where we go to next. The premise of the show is out there but it’s grounded by elements like the Atom’s self-doubts, Stein’s awareness of his mortality, and the familial tragedy of the Hawks.

And you guys, it’s a live action TV series with Atom, the Hawks, Firestorm, and the Flash’s rogues gallery. Why wouldn’t you watch this?

The Stakes Are Much Higher in Second Spider-Man: Homecoming Trailer!