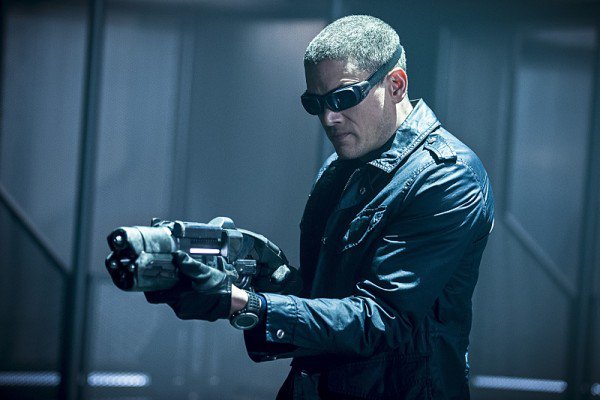 Check out Our Review [WITH SPOILERS] of Legends of Tomorrow Season 1 Episode 15: “Destiny”

Last week, DC’s Legends of Tomorrow delivered a flaccid mess of an episode that exposed almost its entire cast as a group of reactionary dummies. But this week, all the bad is explained away as the series gets very timey-wimey in an episode that is as shocking as it is explosive.

So, what if I told you that nothing the Legends of Tomorrow did so far mattered? What if I told you that every emotion, every mistake, every triumph happened because of the manipulation of the Time Masters? That’s exactly what is revealed this week as Rip Hunter discovered that the Time Masters have influenced every variable and fed the Legends every bit of chronal information to insure that Rip and his crew caused Vandal Savage’s rise to power. That’s a ballsy move that could have made the entire season seem inconsequential, but in reality, the Time Masters’ manipulations put the Legends into position to become true heroes.

Before “Destiny,” the Legends seemed like a bunch of whiny, incompetent boobs. Every move the team made led to Savage achieving more power. Many of the heroes acted completely against character and made decisions that have been suspect at best and selfish and disastrous at worst. But the past fourteen episodes have not been in vain because these installments have allowed the audience to get to know and care about this extended cast. They have allowed Captain Cold and Heat Wave to discover the heroes within and have allowed Jax and Martin Stein to bond into not only a perfect Firestorm, but into perfect friends as well. So when Ray Palmer acted completely out of character and caused Savage’s escape last week, that was a Time Master manipulation.

But now the Legends are free thanks to some quick thinking by Jax who travels back in time so the past Stein can help Jax repair his jump ship. They are free thanks to the inner strength of Heat Wave who is able to resist becoming Chronus again and not only help the Legends escape, he kills the Time Master who dared manipulate him as Chronus in the first place. They are free because of the heroism of Ray Palmer. Most importantly, the Legends of Tomorrow are free because of the sacrifice of Captain Cold, who dies in a blaze of glory destroying the Time Masters’ time manipulation device. This whole season has been an arc devoted to making Snart go from selfish villain to selfless hero, and all those story beats pay off in one moment of explosive glory as the once selfish Len Snart sacrifices everything to save his friends.

Now you know and I know that this isn’t the end of Len Snart, not with a coming season of four(!) CW TV shows on the way (welcome to the family, Supergirl), but that doesn’t lessen the sacrifice of one Len Snart.

Nor does it lessen the impact of the best hour of CW DC TV to air this season as DC’s Legends of Tomorrow  patches all the wounds and reveals all its cards. This episode speaks to the potential of this series, and for the first time in a long time, I can’t wait until tomorrow.