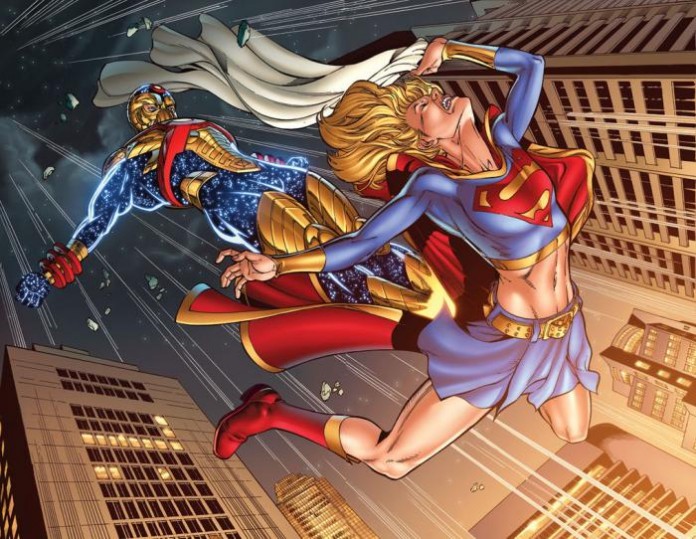 Check out Our Supergirl Episode 3 Review [WITH SPOILERS]!

Now, I don’t really want to hate on Man of Steel. For the most part, I liked the film. It had a few glaring plot holes and someone needs to tell Zack Snyder that aping 9/11 for 45 minutes is neither hip nor edgy, but other than that, it was a very engaging film. But while the story unfolded satisfactorily and sometimes even fascinated, it made me long for a Superman that is actually- y’know, happy? Superman is not Batman and no matter how many Christopher Nolan musical allusions you stick on a soundtrack, Superman will never be Batman. Maybe my ennui with the broody Supes is one of the reasons I have adored Supergirl so much. Because I’ll be damned if the creative minds behind Supergirl didn’t better capture the spirit and ethos of Superman in a text message than the folks behind Man of Steel did in the entirety of that relentless action film.

So how did we get to that fateful message? Well, we played the self doubt game with Kara again this week. Now, you can’t blame her, Kara’s been a super hero for like five minutes and this week, she faced down her greatest challenge. This week, Kara fought one of Superman’s old foes, Reactron, and got her booty handed to her. Now, did this reviewer, a long time Superman fan and pundit, ever think he would see Reactron in live action? No, he didn’t. Did he have little seizures of nerd joy when it happened? Yes, he did.

First off, it’s awesome that the show broke its little story engine and did not have Kara go after an alien escapee three weeks in a row. By having Kara go up against an old foe of Superman’s, it made it seem like there is a wider super hero universe out there and that magnetic North of metahumans isn’t just in National City. The whole thing also made Superman a presence rather than just a plot point. It made the viewer feel that Superman was out there protecting everyone (and not cracking people’s necks, but that is a rant for another day).

The episode also gave Reactron a little meat to his character. The Hellgrammite and Vartox were just obstacles, but Reactron had an edge of tragedy to his past so he was more than just simply an obstacle. You see, Reactron lost his wife in a reactor accident that Superman stopped. During the incident, Reactron and his wife were bathed in nuclear energy; Reactron now hates the Man of Steel and wants to take a person that means something to Superman just as, from Reactron’s twisted perspective, Superman took a person from him. Reactron was not just evil for evil’s sake and was a truly palpable threat, where as the other villains so far on this series (other than Astra) were just obstacles.

The whole conflict was framed with Kara’s self-doubts. With public media attacks from Cat Grant and Maxwell Lord testing her confidence, Supergirl wanted to defeat Reactron without her cousin. She wanted to prove herself, and despite the protestations of the DEO, Kara tried to do just that, and got her little red skirt kicked. Superman had to swoop in and save her and this shook Kara’s confidence even more.

Superman was able to save the day because of Jimmy Olsen. Yes, folks, we had the debut of the signal watch! A classic Silver Age device that, I believe, made its live action debut this week. Now that’s some fan service! But this created a major conflict between Kara and Jimmy because Supergirl felt her friend (and crush) had no faith in her.

Of course, everyone rallied; Team Supergirl found a way to beat Reactron and the whole thing was just laden in more action than I think I ever saw on super hero TV. It was a super brawl that would have made Richard Donner very proud.

In between the action there were your usual soap opera elements with Kara swooning over James, Winn swooning over Kara and the introduction of James’ ex, the famous Lucy Lane (not blond, BOO), who arrives just as Kara admits her feelings for James. Cat Grant had to get over some writer’s block and continues to be the female version of J. Jonah Jameson, and Supergirl even got her own secret HQ office right in the heart of Cat’s building. Well, that just seems like a bad idea.

But the heart of the show was the joy it takes in the concept of super heroism. It’s not laden down with angst or endless darkness, it’s a celebration of the past with an eye towards a modern audience (they basically said that Supergirl was a hero for millennials, but-but, I like her too). This all was driven home through a text message from the Man of Steel himself. Through those carefully chosen words, you just got the idea that the creators of Supergirl just understand Superman. In the message, Superman complimented his cousin, still called James Jimmy, and basically just acted like Superman. Not a sad messianic being overwhelmed by responsibility or a doubt riddled, vulnerable space Jesus, but a hero who wants others to reach thier potential. You know, just like Superman. And it wasn’t cheesy, “boy-scouty,” or old fashioned; it was just moving and heroic.

The show still has its growing pains, but man, is the lightness and reverence of comic book history refreshing.