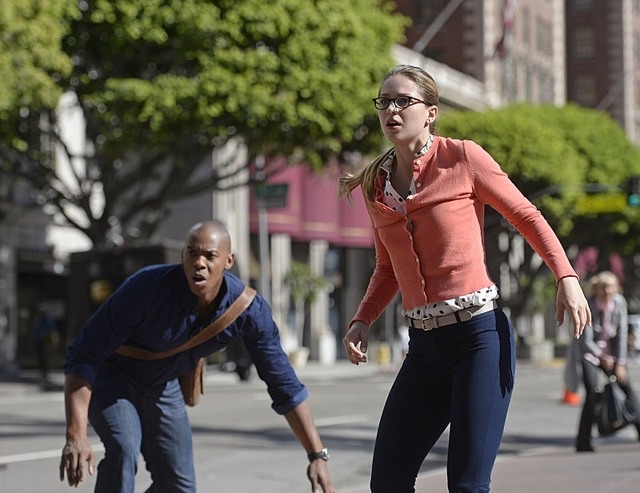 Check out Our Review [WITH SPOILERS] for Supergirl Episode 7 Season 1: “Human for a Day.

Before we get to the earth shattering reveal regarding Hank Henshaw in Supergirl Episode 7, let us break down the rest of a very good episode of Supergirl.

Every show that features a super powered protagonist has to go down the unpowered road. There has to be an episode where the hero loses his or her powers and learns what it’s like to be an average Joe or average Jill. Usually, this episode comes in the first season. Sometimes, like with Superman II, it takes up the entirety of the second act of a major film. Well, tonight Kara went through her trial with no fire as she lost her powers last week in her fight with Red Tornado. Sadly, just at the worst moment, when Kara was learning to live as a human, an earthquake hit, plunging National City into chaos. Usually, these episodes are rather predictable, with the character getting their powers back just at the right moment, and this one followed formula, but it was the added dignity and humanity that made this show so darn good. It was the fact that Kara had to watch an innocent man die in her arms that taught her a lesson of the fragility of humanity; it was the fact that she spent the episode with a broken arm but still endeavored to help anyone and everyone, and it was the fact that she disarmed a gunman with kind words rather than violence that defined Kara as a very different kind of hero.

I shouldn’t say Kara lost all her powers, because this episode proved that Supergirl’s greatest ability was her compassion for others, and that wasn’t lost because of a solar flare. Of course, Kara got her powers back by the end. She received an adrenaline rush when she had to save James Olsen from falling to his death in an elevator shaft, but the truth is, Kara was almost as great a hero without her powers because she cared about everyone and anyone. It was some pretty inspiring stuff for what could have been a pretty paint by numbers episode.

I mentioned Superman II before, but actually, the Supergirl showrunners admitted that this powerless episode was inspired by Geoff Johns and John Romita Jr’s. recent run on DC Comics’ Superman, a storyline where Clark Kent lost his powers after his new solar power ability manifested. It was cool to see that solar power ability in other media so soon after it was introduced in the comics. It just speaks to the modern age of comic-to-media synergy going on in the industry. Kind of neat.

But there was a bit of disconnect between comics and TV, and while it did not harm the episode one iota, it did make me wonder a bit. After the earthquake, while the powerless Kara was doing everything she could to keep her city safe, a dangerous alien was freed and loose in the bowels of the DEO. The quake freed one Jemm, Son of Saturn, and the alien despot was destroying everything in his path in a bid to escape his confinement. The only issue is that Jemm is a bona fide super hero in the comics and always has been. One wonders why, with thousands of DCU alien menaces readily available, the powers that be on Supergirl had a character that is traditionally a hero make such a profound heel-turn. Someone higher up in the Supergirl pecking order must have a distaste for poor Jemm. Well, Jemm became a trial by fire for Alex Danvers and also led to a shocking reveal that might have made more than one DC loyalist poop his or her britches.

At first Jemm seemed unstoppable. He had a jewel embedded on his forehead that could be used to control minds, and he had a murderous streak from here to Saturn. Again, not at all like the comic, although he pretty much looked like a Gene Colon (the character’s creator) drawing come to life. Of course, last week, Alex discovered that Hank Henshaw might have murdered her father back in the day, so poor Alex was trapped in the DEO with two potential monsters. Jemm and the way he used humans like puppets was like a Doctor Who villain come to life, but it wasn’t the good Doctor that helped save Alex, it was a character even older than the Time Lord. During the crisis, Alex forced Henshaw to handcuff himself to a railing, effectively taking the DEO CEO out of the fight. Henshaw protested, but Alex was not about to let the man who murdered her father loose. She tried to take down Jemm on her own and almost succeeded;  Alex went into full Sarah Conner mode and almost defeated the alien killer. Almost. Suddenly, a freed Henshaw saved Alex and utterly destroyed Jemm. The Son of Saturn was down because a bigger and badder alien DC hero had come to Alex’s aid. Henshaw related the tale of how the real Hank Henshaw and Alex’s dad were hunting an alien trapped on Earth. Henshaw was obsessed with killing this alien but Mr. Danvers wasn’t so sure. When Danvers confronted Henshaw, the crazed agent shot him. In turn, the alien killed Henshaw (or so we think) and promised Danvers that he would watch over Danvers’ daughters. The shape shifter took Henshaw’s form and became head of the DEO. The last Son of Saturn might have been dispatched in the episode, but that made room for the last Son of Mars because Hank Henshaw was actually J’onn J’onzz!

I was thinking the other day that poor J’onn J’onzz was the only founding member of the Justice League not to be involved in a current TV or film project. Now, many consider J’onn J’onzz the first Silver Age character, and therefore he deserves some modern media love.  Adding J’onn J’onzz to the mix of Supergirl should make things more DCU friendly and also allow the creators to explore this iconic character to the fullest extent. The reveal was handled perfectly and the brief shot of J’onn J’onzz in action put the character’s regal strength on display. Now, this doesn’t rule out Henshaw returning in his other, more villainous comic book identity. After all, the evil Henshaw could still be out there somewhere, but having J’onn J’onzz as a mentor figure for the developing Kara is really, really fascinating.

But of course, Kara has another mentor in Cat Grant, and once again Cat was instrumental in inspiring Supergirl to save the day.  As that relationship continues to evolve, Cara will also have one of DC’s classic heroes to help forge her into a legend.

Welcome to DC TV J’onn J’onzz, we are happy to have you.