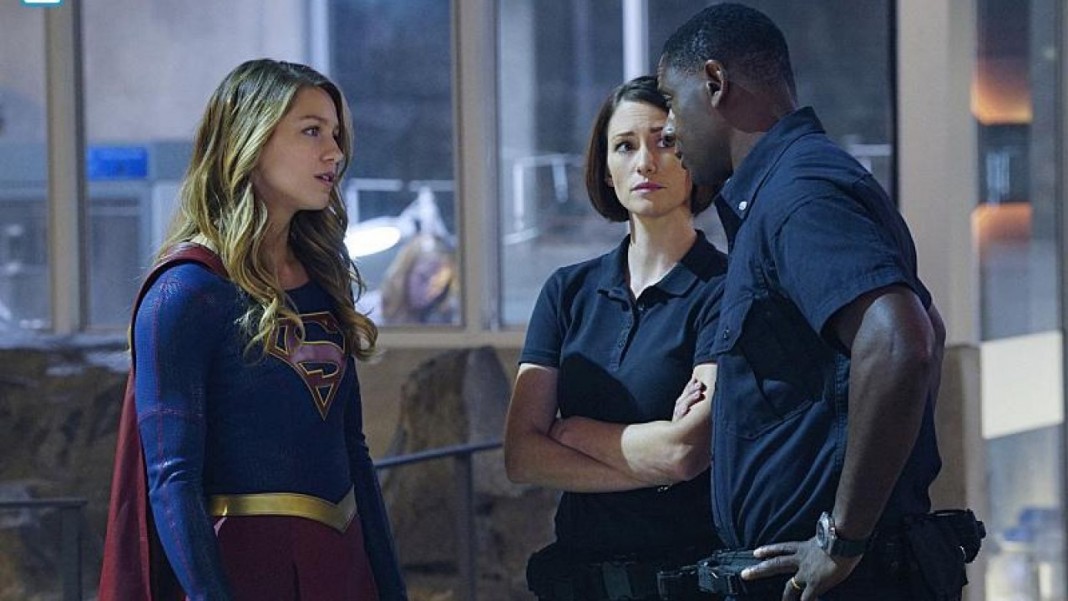 Check out Our Review [WITH SPOILERS] of Supergirl Episode 8 Season 1: “Hostile Takeover!”

Do you like Superman II? Well, it seemed the producers of Superman certainly did as this week’s winter finale had a ton and a half of nods, winks, hugs, and downright intercourse with the second Superman film.

We start things off with Supergirl’s Aunt Astra. Astra, cast in the role of Kryptonian environmental rebel, is obviously a stand in for General Zod and the whole story arc gets its inspiration from Geoff Johns and Richard Donner’s run on Action Comics from over a decade ago. This week, we learned that Astra rebelled against Kryptonian order because she knew that the planet was unstable and was going to pop like a galactic pimple. She became an environmental terrorist and committed great crimes in order to spread the world about Krypton’s destruction.  And hey, remember the beginning of Superman II, when Non snapped the Kryptonian guard’s neck? Yeah, that’s referenced as well and it was exciting as hell to even hear Non’s name mentioned.

So Astra was on the loose and confronted Supergirl. Supergirl was having none of it and was training very hard for her inevitable confrontation with Astra. Astra and her goons even had special harnesses that protected them from Kryptonite, rendering the DEO useless and forcing Supergirl to go it alone. The two had a very visually impressive super brawl that was a bit reminiscent of Man of Steel, but guess what, in the midst of the Kryptonian versus Kryptonian brawl, Supergirl actually took time to save people! Zack Snyder, please take note!

Supergirl got the better of Astra but not before Astra was able to lay in some seeds of doubt regarding Kara’s mother. Kara learned that her Kryptonian mother used Kara’s relationship with Astra to track the criminal down and arrest her. Now, Supergirl saw her perfect mother as a conniving authoritarian and it seemed like her entire world crumbled. Astra truly parallels the more recent uses of Zod in the comic and the zealot patriot Zod that was featured in Man of Steel. We even learned that one of those goons in Astra’s cadre is her husband so this whole deal is a family affair.

Meanwhile, we had some drama over at Cat Co. as Cat Grant became the victim of a Sony-like email hack. Instead of revealing embarrassing secrets about failed Spider-Man spin-offs, the hacks revealed that Cat has a twenty four year old son. To protect this secret and save the young man more pain, Cat was going to step down as head of Cat Co. Or, she was until Kara used her super hearing to discover that it was some puffy corporate lowlife named Dirk Morgan that was responsible for the hack. When I heard the name Morgan, I totally thought it was going to be Morgan Edge, a major media figure and all around scumbag from the Superman comics of the 70’s and 80’s, but alas, it was just some schlep that was quickly dismantled by Cat once Kara let her in on the truth. Of course, James and Winn were also there to aid and abet with Winn mooning over Kara the whole time. The crew even brought in Lucy Lane for some legal advice which led to some hilarious Cat Grant pot shots at Lucy’s famous sister.

So Cat stood victorious, but it seemed that Supergirl might be in trouble. Alex postulated that Astra threw the fight against Kara to infiltrate the DEO and get into Kara’s brain regarding the past. And Alex was right. Astra busted out and she and her super powered goons attacked Morgan Edge’s company HQ.  The battle was frenetic and one of the better super-powered TV fights in recent memory with Supergirl and the DEO racing to stop the group of alien killers. Now remember, little did Kara know that J’onn J’onzz was fighting by her side and not the very human Hank Henshaw. Now that we’re aware of Henshaw’s true identity –  the Martian Manhunter – it felt like Supergirl has opened up to the wider DCU. This doesn’t mean that the Flash will pop by any time soon, but it gave the series a feel that was not just dwelling in the little isolated CBS corner of the DCU.

The fight raged, and Kara was burning mad because her familial bonds with Krypton were shattered. Not even the power of the Last Son of Mars could turn the tide and Astra’s husband revealed that he was, in fact, none other than the Kryptonian criminal Non! Now, this should come as a surprise to some old school fans because Non has traditionally been portrayed as a mindless brute. Not so in this incarnation as he was very articulate, very British, and very powerful. So we have a new Kryptonian baddie for Kara – the famous and not mindless Non.

As I said, in a way, Supergirl lost a mother this week. But by episode’s end she gained a new one. Before the battle with Astra and Non, Kara checked on Cat and the CEO of Cat Co. did some fact checking. Cat proved herself to be a great reporter by doing what Lois Lane could never do and add up all the facts of Supergirl’s appearances. She ciphered out that Kara and Supergirl were the same person and the look of pride on Cat’s face was palpable. It was a beautiful and emotional revelation and I can’t wait to see where the series goes now that the volatile but supportive Cat Grant knows the truth. Supergirl might need the support because Astra and Non are tearing things up in National City.

Enjoy your holiday respite, Supergirl, you earned for it. The series continues to charm while delivering some intense and classical DC Universe action. Now, the only question is, what am I going to do until  Supergirl returns in January? Maybe I’ll see that new space film that’s coming out, Star…something something. Anyone hear anything about it?