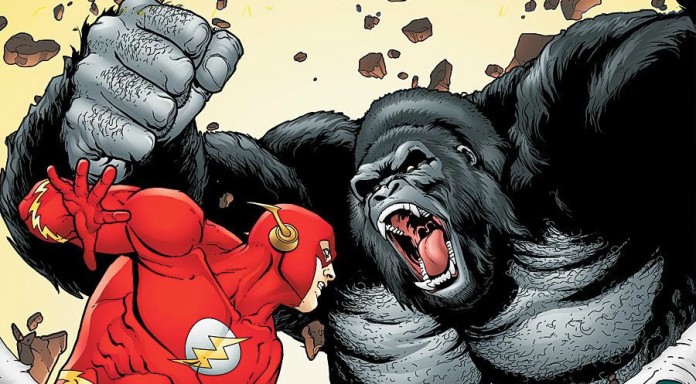 Check out Our Review [WITH SPOILERS] of The Flash Episode 7: “Gorilla Warfare.”

One of the highlights on the last season of The Flash was the coming of Gorilla Grodd. Having a giant, malevolent, psychic, anthropomorphic gorilla stomping around the sewers of Central City could have been a serious moment of silliness and camp, a real jump the shark (monkey?) moment that could have derailed the entire show. But the creators of The Flash did not flinch from the innate silliness of the idea and fully embraced the concept’s sheer insanity. And the result was glorious. Gorilla Grodd was terrifying, even, perhaps, the most potent threat on DCTV. This week, Grodd was back and the results were a bit less potent than last time around even through there was a great deal to love about The Flash Episode 7.

When last we met Grodd, he was out to punish his “father,” Harrison Wells. Of course, Wells is dead but there is a new, Earth 2 Wells in Central City (and man, this must be confusing to newbies). This week, the Earth 2 Wells had to come face to face with his counterpart’s most vile creation, a sentient, psychic ape filled with hate and loneliness.

It was the loneliness part that was the problem. Last time we saw Grodd, he was forcing Joe West to point a gun at his own head, killing city workers, and generally, acting like the ape tyrant that has terrified DC fans for years. By adding an element of loneliness, of sympathetic otherness, this week’s episode may have neutered Grodd a bit. Grodd should not be sympathetic. Why, even earlier in this week’s episode, Grodd pimp-slapped an innocent scientist the length of a football field, killing the poor guy. But yet, viewers were still asked to buy the Frankenstein- Planet of the Apes Caesar stuff. Sorry guys, the ape went on a violent killing spree and showed a streak of cruelty a mile long. Yeah, he was a victim of animal cruelty and all that, but while I was watching this week, I couldn’t get the image of a horrified and vulnerable Joe West out of mind, so no, no sympathy for the ape despot.

The real drama came this week because Barry Allen was out of action thanks to last episode’s beat down administered by Zoom. Barry was confined to the deceased Harrison Well’s wheelchair and it was up to Earth 2 Harry Wells to bring down Grodd. Wells donned the Reverse Flash suit (for no good reason, other than it was cool), and confronted Grodd. Grodd had abducted Kaitlin Snow because every giant ape needs to abscond with a beautiful woman. Grodd wanted Snow to help him find other apes like him in order to increase their intelligence so he would not be alone. More Caesar stuff there but the foreshadowing of a race of super gorillas made this DC fan very happy. Listen, even if there is a slight possibility of Detective Chimp on live action TV, I’m going to get psyched.

So Barry was out of action, Snow was in terrible danger, and Wells was on the case, but things weren’t going very well. Team Flash needed its speedster back so Iris West (who is so much more tolerable this season) called in Henry Allen to give his son the ‘ol, “Go get ’em slugger” so Barry could get his butt out of the wheelchair and fight the evil gorilla. It all worked; Barry sped back into action, Wells and Snow figured out how to shunt Grodd into Earth 2 and the evil gorilla saga came to an end…for now. Again, there was a little too much Caesar and too little gorilla Hitler for my tastes but in truth, watching curmudgeonly genius Wells transform into self sacrificing hero was pretty fun. Also, watching Flash super-speed punch Grodd on TV- that will never get old to this old school Super Friends fan.  But next time we see Grodd, I want to see evil gorilla despot over emo ape.

In an installment about super monkeys it was pretty impressive to watch the episode so effectively use the grounded motif of fatherhood. Barry was able to get up and defeat Grodd thanks to the boosting of his fathers, Joe West and Henry Allen, while Grodd reached out to his father, Harrison Wells. It’s rather amazing how this show is able to find relatable and grounding themes even in the midst of the most glorious, comic book inspired chaos.

The DC Comics’ goodness didn’t end with Grodd as Cisco Ramon had himself a date with that beautiful and mysterious barista from Jitters. You remember, Kendra Saunders? That name should mean a great deal to DC fans but for the newbies, this was just another date for Cisco. Well, until he ‘vibed’ on Kendra and had a vision of an angelic, winged woman. Yes, folks, we got ourselves the first look at Hawkgirl on DCTV! The episode didn’t do much more than tease the arrival of the legendary heroine but a tease was enough to get this DC fan’s blood a flowing. I love the angle of bringing Kendra in as a love interest for Cisco, it really allows the Hawkgirl concept to have a personal meaning to our cast. Truly, I can’t wait to see where this one goes.

There was not much mention of the Zoom situation this week other than Well’s renewed dedication to saving his daughter, but what about Grodd’s final fate? Well, once he arrived on Earth 2, Grodd discovered a city located in a verdant jungle, a city of beings like him- a Gorilla City. Nice.

Hopefully, next time we see Grodd, Flash will have to save that city from his unique brand of evil and the real, teeth-gnashing horror that is Grodd will be back. 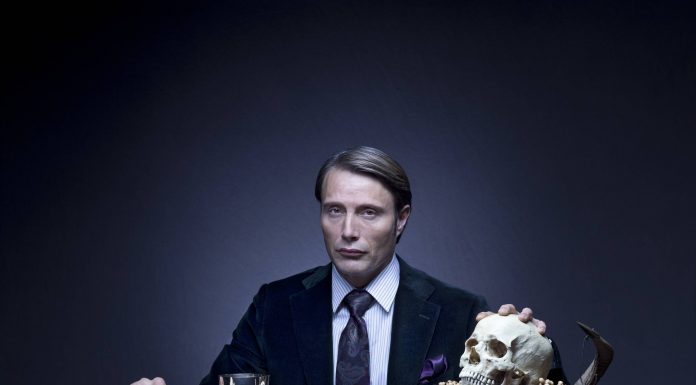 Actor Mads Mikkelsen Weighs in on Rogue One Reshoots