Home TV Reviews The Flash Season 2 Episode 23 Review: “The Race for His Life” 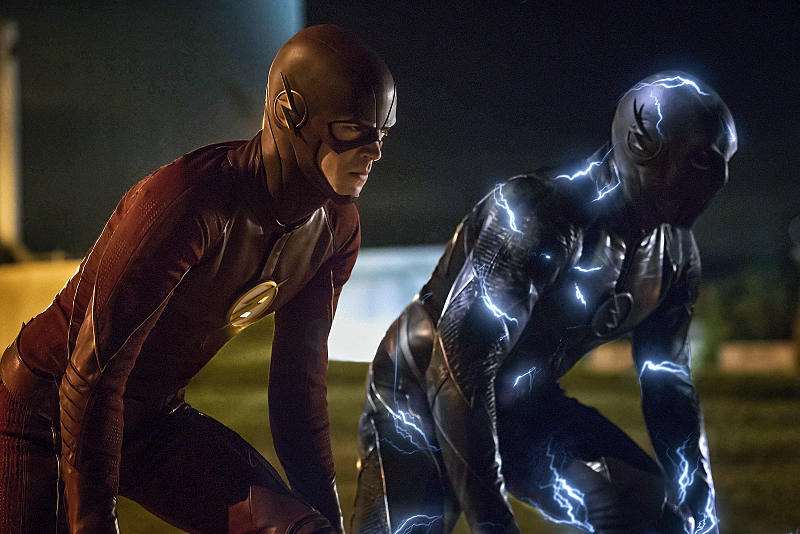 Check out Our Review [WITH SPOILERS] of The Flash Season 2 Episode 23: “The Race for His Life”

Before we touch on that nuclear explosion of a story direction, let’s talk about the wrap up to season two. The whole thing kicks off with Henry Allen’s funeral and a challenge from Zoom. Zoom wants to power a device that will wipe out the multiverse so he can rule over the one true Earth. Dan Didio wanted the same thing once. Oh stop, I’m kidding.

Anyway, Zoom wants to race Flash in a winner take all contest. Team Flash fears for Barry and locks him up in STAR Labs. They decide to take on Zoom alone and they almost win the day, except Joe West gets sucked back to Earth-2 along with Zoom. So they have no choice but to free Barry in order to save Joe and the race is on.

Honestly, Zoom’s plan is a little flimsy. He wants to use Barry’s speed and his own to destroy all of reality except Earth-1. I guess I can overlook the haphazardness of the plot because as Cisco says, Zoom is “Crazy pants.” And really, it’s all empty complaining because the action was so flippin’ great that I was white-knuckled for the entire conclusion.

Barry makes a speed duplicate, a time remnant, and it sacrifices itself to take down Zoom. So basically, a Barry sacrifices his life to save reality. How Crisis! From there, the episode goes into some wonderfully circular storytelling as the Speed Force ghosts from earlier in the season get all Raiders of the Lost Ark on Zoom’s ass and drag him screaming into the Speed Force. The good guys win.

Then, the reveal we have all been waiting for happens. The identity of the man in the iron mask has his mask removed. I’m sure that, like me, you were waiting to see Jay’s face under that mask; you know, a good version of Zoom. But you know what? I really liked Teddy Sears as Jay. I liked his heroic earnestness as Jay and I really liked his ability to pull off the terrifying Zoom. I’ll be honest though; as much as I enjoyed Sears, I missed the elder statesmen, the grey-templed Jay Garrick from the comics. So imagine my glee when that mask was removed and a doppelganger of Henry Allen is revealed.  Now, TV’s first Flash is playing comics’ first Flash and I just love the synergy. Plus, they put him in the classic blue pants Flash suit. Awesome.

Meanwhile, Harry Wells, Jesse and Jay decide to go back to Earth-2 so there is a heartfelt farewell. Sadly, we never get to see Wally West or Jesse Wells manifest any speed powers, but there’s always next season I guess. All is well except for Barry, who, despite defeating Zoom and saving all of reality, just misses his dad.

So he goes back in time and saves his mom from Reverse Flash. Yeah, no kidding, this happens. In other words, on the day before DC: Rebirth ships to stores, on the eve of the end of the New 52, an event kicked off by Barry saving Nora Allen in the comics, the same inciting incident happens on TV. Does that mean a New 52 on TV? Does that mean the coming of a crisis?

The answers to those questions are as infinite as the planets in the multiverse, but what I do know is that season three of The Flash can’t get here fast enough.