As The Walking Dead fans, we expect a certain level of horror. Tragedy. In a post-apocalyptic world, not everyone is going to survive and we have seen plenty of deaths along the way. Nothing, though; could have prepared us for The Walking Dead’s gory season premier.

If you haven’t watched season 7’s premier, I would definitely suggest doing so before reading this article. Fans were told there would be a death. Maybe even two. And considering the newest foe Negan was threatening Rick’s group with a barbed baseball bat, we knew it was going to be bloody.

After waiting close to 8 months to see who was on the wrong end of Lucille (Negan’s famed weapon), we waited an additional 30 minutes. That’s right, as if it wasn’t bad enough, the episode dragged for the first hour, keeping us all in suspense. We got to see Negan threatening Rick more, but all in all I felt this part was very unnecessary. The audience wanted to know who was the victim and it felt like the writers really just needed some distraction, as they had no intention of doing anything else during the premier other than making us all suffer.

The Wait Was Over

Finally, after 30 excruciating minutes, the time had come. And The Walking Dead’s gory premier lived up to its name. The victim? Abraham. Now, I have mixed feelings about this. Because, despite the fact that many disliked Michael Cudlitz’s character due to his break up with Rosita in season 6. But I liked him and was really bummed out that he was the victim.

But, it had seemed for a moment that, we had avoided the comic book death everyone was so scared of. Abraham’s death was tragic but at least Glenn was safe, right? No. It seems the world’s most badass ginger’s death was only a tease to fool fans into thinking Glenn was going to live. And it was this scene that almost made me turn to a different channel.

Soon after Abraham’s death and Daryl’s short act of defiance, Negan turned his bat on Glenn. And for what seemed like an eternity, the audience was subjugated to a horrific display of gore. Not only were there screams from others, but we heard every bone, every blood splatter. It was a gurgling mess that personally made me sick.

The Future of Season 7

Enough of me and my opinions. Let’s talk about what this means. Clearly we are working with a big bad we’ve never experienced before. Not even the Governor was this cruel. Before the episode was over, Negan had almost maimed Carl (that kid is gonna look like a pirate by the time the show is over). The message was clear: Rick is no longer in charge.

For all of Abraham’s faults, his military precision, sense of leadership, and willingness to get his hands dirty made him an asset that Rick needed. And well, it just sucks Glenn is gone. As one of the key players from the very beginning, we’ve really seen his character blossom. Not only was he more than capable of killing walkers, he was the constant reminder of the humanity that the group needed in this new world. Without him gone, what will Rick become? What will any of them become?

Not only that, but now Maggie has seen everyone she loved come to tragic ends due to people. oh, and she’s pregnant.

Hopefully, the rest of the season isn’t as depressing as last night’s premier and Abraham and Glenn are happy wherever the other characters who didn’t deserve to die are. 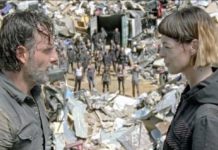 Walking Dead Debate: Why Teaming Up with the Scavengers Is a Bad Idea 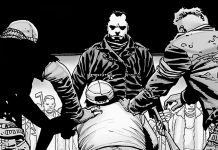