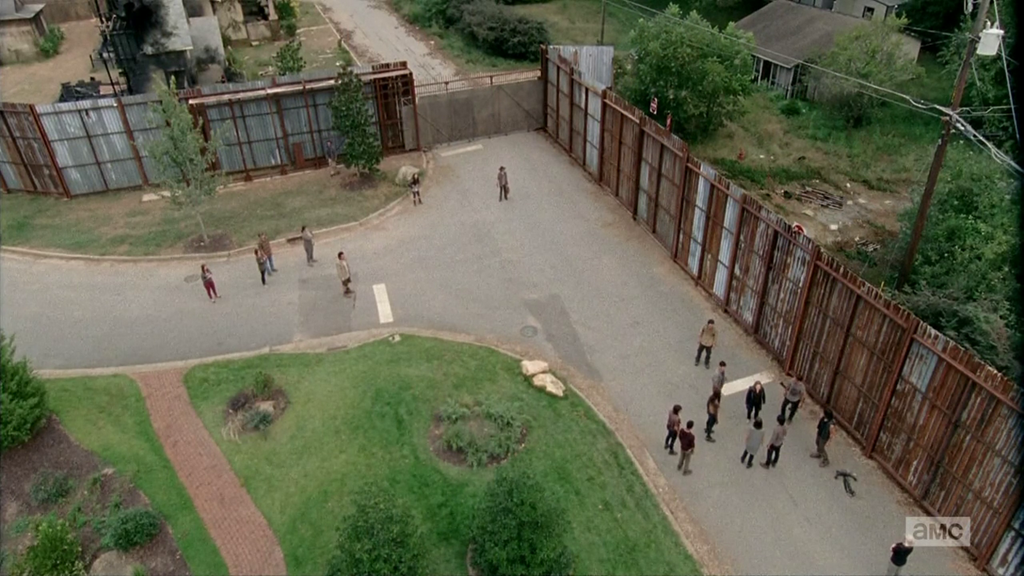 I sometimes wonder if they tell actors to simply have a vacant look when they are traumatized. Tonight’s episode opened up with several frames of our dear comrade Monroe looking a bit rough around the edges. Not sleeping well, perhaps? Does she spend all of her time wondering how Rick is able to sweat so profusely, yet we hardly ever see him drinking anything? In between scenes of ‘I’ve seen better days’, we get a shot of Rick, by foot, bringing a huge mess of zombies right into the heart of Alexandria. My guess is that Rick probably played Everquest, but I doubt many will get that reference. TRAIN TO ZONE!

‘This place is a graveyard,’ quipped random_04_Alexandrian. Does anybody else get the impression that they really play up the ‘innocence’ of the citizens outside of Rick’s group? I’m also glad to see Miss Vacant Look really commanding her people. Always good to look up at the leadership and see them as a quivering mass of gooey ‘I-can’t-deal-with-this’, right? Also, I love how the people of Alexandria throw a hissy-fit over the food. ‘Oh, I can’t have an extra can of soup? HOW AM I SUPPOSE TO FEED MY FAMILY?!?!? I CAN’T WATCH THEM STARVE!” Seriously? SERIOUSLY? Are they diabetic? Have these people had to deal with anything, even before the zombie apocalypse? The greatest adversity these guys have seen is a wicked case of brain-freeze….which they probably went to the Emergency Room for. ‘DOCTOR, DOCTOR…I feel like I have a railroad spike made out of a lightsaber in my head!’ Also, Glenn’s name on the wall. I guess we have our confirmation there, eh?

Also, going back to the citizens of the town…so the guy who stops the pillaging then uses his influence to do exactly what he said to the others not to do. Hooray for corruption! You know what? I’m angry…I’m going to go toss a knife at the ground. Hey, does anybody have a picture of Picard doing the face-palm thing? I’m starting to get awfully stifled by all of these eye-rolling melodrama. ‘Maybe she’s dead?’ Jeez kid, lighten up. This is why your girlfriend left you in the first place would be my guess. So half into this episode and I’ve spent most of my time complaining about the new neighbors. Always a good sign! I think they need to stop handing out participation awards during the zombie apocalypse.

‘I hope a doctor shows up and I can go back to reading War and Peace…but then the end of the world happened’. Hopefully that character shapes up a bit…I tend to think they will develop her as a love interest for the Master Mullet. I like that they are starting to utilize the woman from American Horror Story…the blond with the formerly abusive husband. ‘If we don’t fight…we die’. Sounds like she’s starting to echo Rick’s sentiment, no? She may be the cornerstone in getting the Alexandrians up to speed. I also would like to add that I wouldn’t immediately jump into a sewer system with zombies afoot. Something just doesn’t feel right with that line of thought. At least we get some sweet mud zombies out of the deal…and Maggie doing a really sweet Kano-from-Mortal Kombat impression. A real shame you can’t kill them via heart-removal. ‘Oh, you got a head-boo boo? You should probably head back to town!’

I really don’t like that one kid, either. I think Rick kind of gets a bad vibe from him too…oh, and I guess that love interest for Mr. Mullet just changed. That sentence happened in real time, folks. I guess I read that one wrong! And then we have the bombshell…Maggie’s pregnant! That’s not a big shocker for the readers, but they were being rather subtle about it during the episodes. I’m kind of surprised to see her give up on looking for him, but then again…Maggie probably read the books too. She doesn’t want him coming back because it would just be so much worse. Deanna should probably also work on her zombie-killing 101 even though it was funny watching her cookie cutter that zombie’s chest. She would have been at that all night! At least she finally realized that Rick is the far better leader. Under Rick’s leadership, we will get crops, we will have councils, and there will be free long-distance calls to the spirit world. Oh, you guys thought were were done with Lori? HA! I guess we will end this episode by symbolically removing Glenn’s name from the list of the fallen…oh, and Nicholas’ name too! I guess we will be seeing both back soon. Hooray!

First Image of DC’s Trinity on the Set of Batman V Superman!