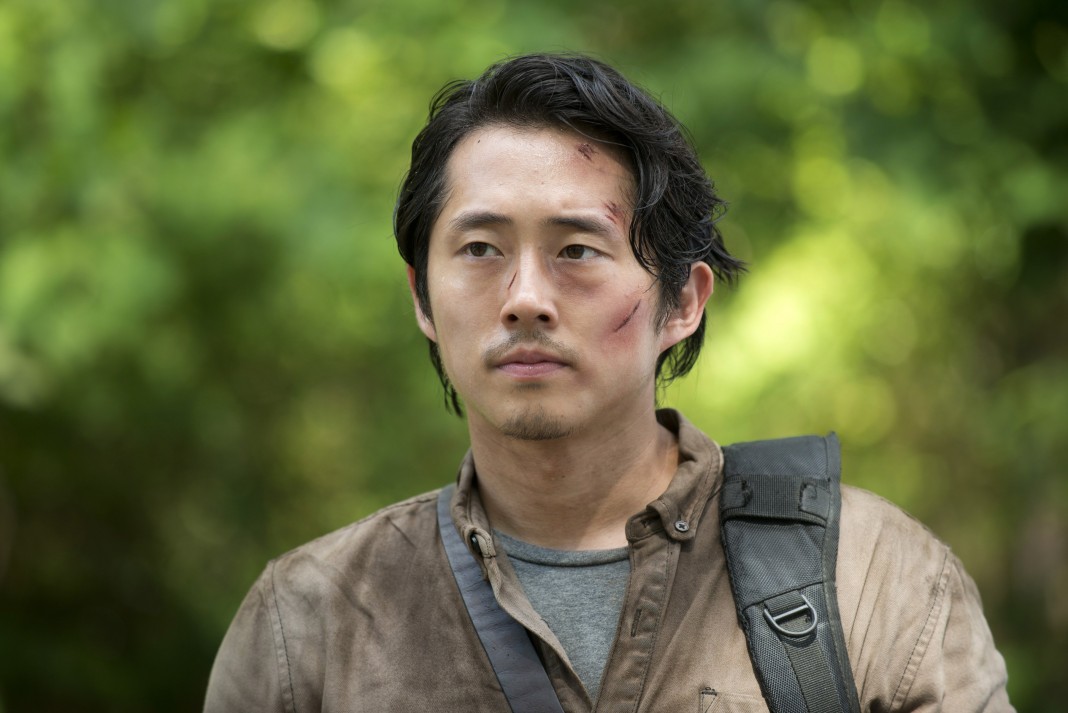 So another Sunday and another chance to find out what happened to Glenn…and what’s up with that other new group! Will we get our answers? Will the zombie pressure cooker finally pop? Will Morgan’s pet ‘wolf’ escape? I guess we are about to find out! Starting off, we get to finally see what happened to Glenn! Oh, that slippy little bugger…he made it underneath the dumpster and then we get some reverse-prone zombie slashing. I wonder how long that would take to get tiring? At least he has some time to reflect with Nicholas. Knowing how things go in the comics, I’m not sure I’m happy to see him survive but I guess we will cross that bridge when we get there. I guess he had enough time underneath that dumpster to grow a stash…and that little girl didn’t even compliment him on it. I’m not quite sure why she was being so evasive, but damn…she was driving poor Glenn crazy! You see what it is like to not know, Glenn? HUH? HUH?

When we came back from the commercial break and intro, we have Sweaty Rick ominously pass Morgan and say how they have to talk later. What about? Probably what kind of toppings to get on the pizza later…or perhaps Morgan’s ultra-pacifist ways. From there, Rick goes and sees Maggie who happens to be manning the walls. She’s waiting for Glenn to get back with that sweet mustache of his…she saw the intro too! Wait, did she? Joking aside, you really get to see Rick return to his leadership role. Hopefully he gets that erratic act-first motion out of his system and just gets it to act-first. That erratic thing scares the good townsfolk, you know? Cutting back to Glenn, we see him mercy kill a zombie who has his eye stuck to a grate. A tad bit graphic, specially for the optically weak and then Glenn finds some kind of note that clearly has an effect on him. Then, snapping back to Rick, we see him remove Gabriel’s fliers. I guess Rick isn’t exactly feeling the power of prayer. Not quite sure where they want to go with that, but we’ll see. Speaking of wait-and-see-what-happens, does anybody else get a bad vibe from Rick teaching that kid how to shoot? Something tells me that’s going to come back around. Definitely with the way he was looking at Carl too…like, ‘I can’t wait to shoot you in the eye’ kinda look. I get that vibe from him, ya know?

We really get a chance to see into Morgan’s psyche. He is obviously conflicted about his non-killing choice, but he feels he must hold it. Will it he be able to maintain it? I hope that he is able to keep it up – this group needs a center that sticks around for a bit. You can see that he really isn’t sure, and that’s great for character development. We don’t need anymore zealots in the world…specially the zombie apocalypse world! I also see that Michonne really wants the rest of the people of Alexandria to be able to fight with the rest of them. I say that because she totally nixxed Rick’s plan to just do it within their own group. Those greenhorns gotta earn their wings sooner or later! At least we get to see Rosy trying to get Mullet Man to buck up…and on that note he leaves. What the heck, dude? I thought you already earned your wings!

Going back to Glenn and little Missy, we see Glenn continue to be a bright shining life in this world..even when a little girl has a gun pointed at his head. Maggie doesn’t know if Glenn is alive and he’s out there trying to get Soul Asylum to come back to town? Ugh, that attitude of yours Glenn is really charming but it is going to get you into trouble. He’s fearless, I’ll give him that. “You point a gun at me and I’m the asshole?” Let’s not to be too judgmental when little Missy mercy kills a zombie either, Glenn! One keeps seeing chunks fall off that church too…is that an allusion to the good Father? After that, we see Rick get some quality bonding time in with an Alexandrian. I guess he slowly is winning them over.

I don’t now about you guys, but does the teenage angst angle play out a little thin? I’m not too keen on Little Missy or that jerk-kid. Oh, I say that and jerk-kid has a fist full of bullets. This isn’t a Rage Against The Machine song, kid! He probably is just going to mix them with some pop-rocks and soda, right? And what’s up with Spencer trying to do the Mission Impossible thing? There are easier ways to get a burrito, man! Exactly what function was that? Spencer was going to run off all commando style and save the day? Man, these guys can be to entirely green.

From there, we see Morgan recruit the new-nurse and Carol watches them like a hawk. There is nothing that gets past that person, that’s for sure. She can sneak up on them while she has a baby in her arms! That’s like a stealth level of 100 though I guess she doesn’t wanna showboat too much. I almost feel like when the kid asked Carol about the monsters, she wanted to answer ‘I’m the monster’ but that might have just been me…and with that, we have Carol find out about Morgan and then JERK-KID! Oh, you thought he was done, didn’t you? Thought he was just going sit around and pine for his old love, didn’t ya? Oh, cutaway time. Thought you were going to get some resolution to that right away, right? Look, just because he was reaching behind himself and drawing a gun on Carl doesn’t mean that action happens right away! There’s plenty enough time to watch green balloons rise…and churches to fall!

The Evolution of Free Comic Book Day (and why I like the hell out...