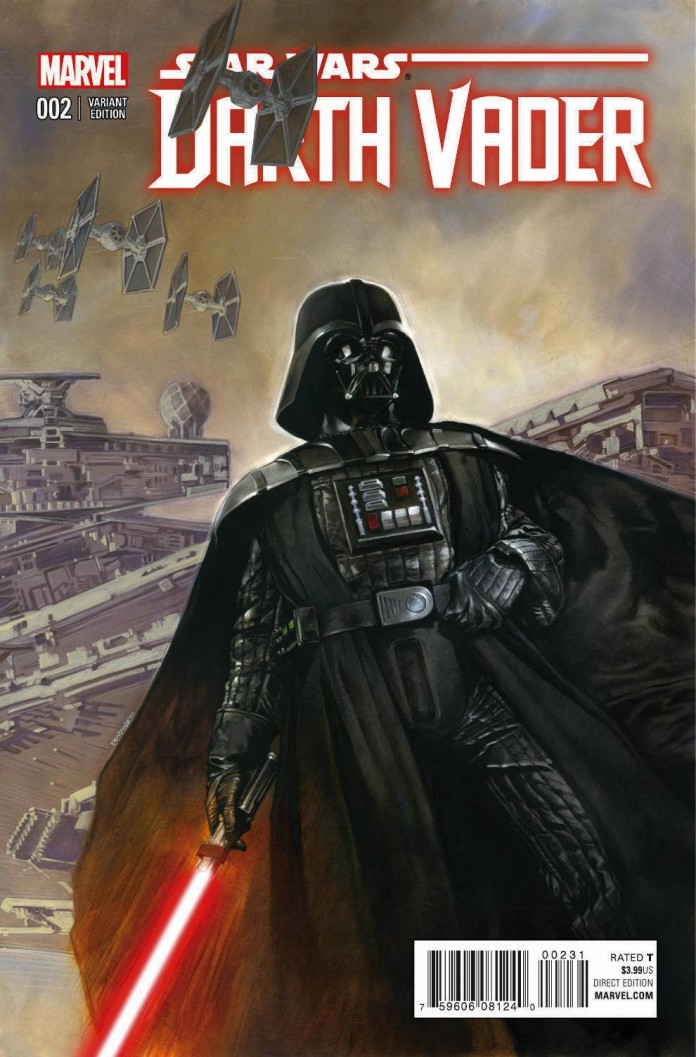 Check out Our Review [WITH SPOILERS] for Darth Vader #2!

And now we return to cover the second issue of the Darth Vader series.  If you weren’t able to catch my coverage on the first issue, make sure you have read it to avoid any spoilers. Darth Vader #2 is very similar to the first in writing style and illustrations. The only difference is the storyline itself. What we start to see in this particular issue, as well as issue number 3, is the noticeably increased pace of the storyline; essentially, the series goes 0-60 over the span of a couple of issues. The dialogue in the second issue is especially quick and to the point; Kieron Gillen nails the dialogue for Darth Vader and is able to immerse the reader into the comic. All of the speaking habits as well as mannerisms are captured perfectly within this issue. The illustrations were a tad above average but, as before, it was Edgar Delgado’s coloring that really made the art pop off the page. The contrasting colors in the background really instill a variety of emotions and heighten the characters’ personalities. The combination of pencils and inks, along with an incredibly dynamic palette of colors, is what makes me come back to this particular issue over and over again.

Darth Vader #2 hits the reader immediately with a star fighter battle against a Pirate Corvette spaceship and an imperial shuttle. The Imperial shuttle is under attack when Darth Vader and two Imperial star fighters come out of nowhere and disable the Corvette. Upon return, Vader meets with the recently promoted ‘Grand General’ Tagge to discuss what happened. Tagge starts to suspect a security breach since the Empire has had to deal with an increasing amount of raids on their shuttles. Tagge starts to fancy himself an economist discussing the opportunity cost of how many Star Destroyers they could have made rather than the Death Star. Tagge sends Vader on a mission to locate the base of the Corvette ship and gather information before the base self-destructs. Vader’s patience is tested as Tagge sends his errand boy, Lieutenant Oon-Ai, to watch over Vader while he conducts his business. Darth quickly expresses his displeasure in the matter and dislikes the idea that Tagge knows his every move.

As the scene cuts to the ‘Extreme Edge of the Outer Rim’ it shows the droid Corvette ship – retrofitted to carry Darth Vader – nearing its home base. Those who ran the base expected the Corvette ship to bring back Imperial weapons, only to find Darth Vader and a squad of Stormtroopers waiting for them. Darth and the troopers make their way through the base and encounter battle droids ready for them. Vader handily eliminates the threat as the self-destruct feature of the base is activated. The troopers head back to the Corvette as Vader while Vader and Oon-Ai head back into the destructing base to collect information about the raids. When reporting his findings from the base on the outer rim, Vader discloses his findings; he discovered that the leak Tagge was referring to was, in fact, Oon-Ai. Vader storms off to destroy the remaining evidence as he reminds Tagge that he will monitor any adjutant as closely as they monitor him. The rest is left to Darth Vader #3!