When a Stormtrooper walks onto the stage at the CMAs, William Shatner isn’t the first suspect one would consider when trying to identify a ceremony-crashing, imperial foot-soldier stepping up to the microphone (at 9:10). Heck, he wasn’t even on the list…until the helmet came off.

The opening scene at this year’s CMAs was one to remember as Brad Paisley and Carrie Underwood demonstrated their Star Wars fandom, dressing as Han Solo and Princess Leia (beginning of video). It seems that everyone, including Captain Kirk, has caught a form of the Star Wars bug. I wouldn’t blame him seeing as it is one of the most anxiously awaited films of all time. Hopefully, it doesn’t feature William Shatner singing “Girl Crush,” like he does before heading to the gift lounge in the video above (10:34). Yes, we’re hoping to avoid seeing that again.

But…why a Stormtrooper? That’s like saying Shatner is military fodder. This is William-freaking-Shatner, okay? On his worst day, he’s a Lord of the Sith; a high ranking, rebellion crushing, choke-you-out-from-across-the-room Lord of the Sith who will incinerate your planet after scatting out “California Dreamin” by The Mamas & The Papas. Your planet’s destruction sounds a little harsh (as does the scat singing), but don’t worry; William Shatner can help you find a nice hotel at the price point you prefer.

Were you surprised? Perplexed? Happy to see William Shatner “Shat” all over the CMAs? Let us know below! 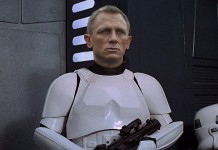 Inhumans vs X-Men #1 Review: Lots of Action and ‘X-position’ (get it?)