Can’t get enough of radiation, Nuka Cola, and ‘settlements that could use your assistance’? Then rejoice! Tonight at midnight, the Fallout 4 expansion, Far Harbor, is available to play! Showing off new monsters, areas to explore, quests, and NPCs, Far Harbor looks to be one of the biggest expansion for Fallout 4…that is until the next giant one they make! Either way, this expansion looks like a solid addition to the sprawling and epic story that is Fallout 4. Something tells me that quite a few people will be calling out of work tomorrow!

As per the video’s description, “Preview your journey to Far Harbor, the next game add-on for Fallout 4. Far Harbor docks on Xbox One, PlayStation 4, and PC on Thursday, May 19th.

In Far Harbor, a new case from Valentine’s Detective Agency leads you on a search for a young woman and a secret colony of synths. Travel off the coast of Maine to the mysterious island of Far Harbor, where higher levels of radiation have created a more feral world. Navigate through the growing conflict between the synths, the Children of Atom, and the local townspeople. Will you work towards bringing peace to Far Harbor, and at what cost?

Far Harbor features the largest landmass for an add-on that Bethesda Game Studios has ever created, filled with new faction quests, settlements, lethal creatures and dungeons. Become more powerful with new, higher-level armor and weapons. The choices are all yours.” 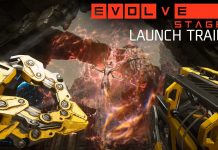