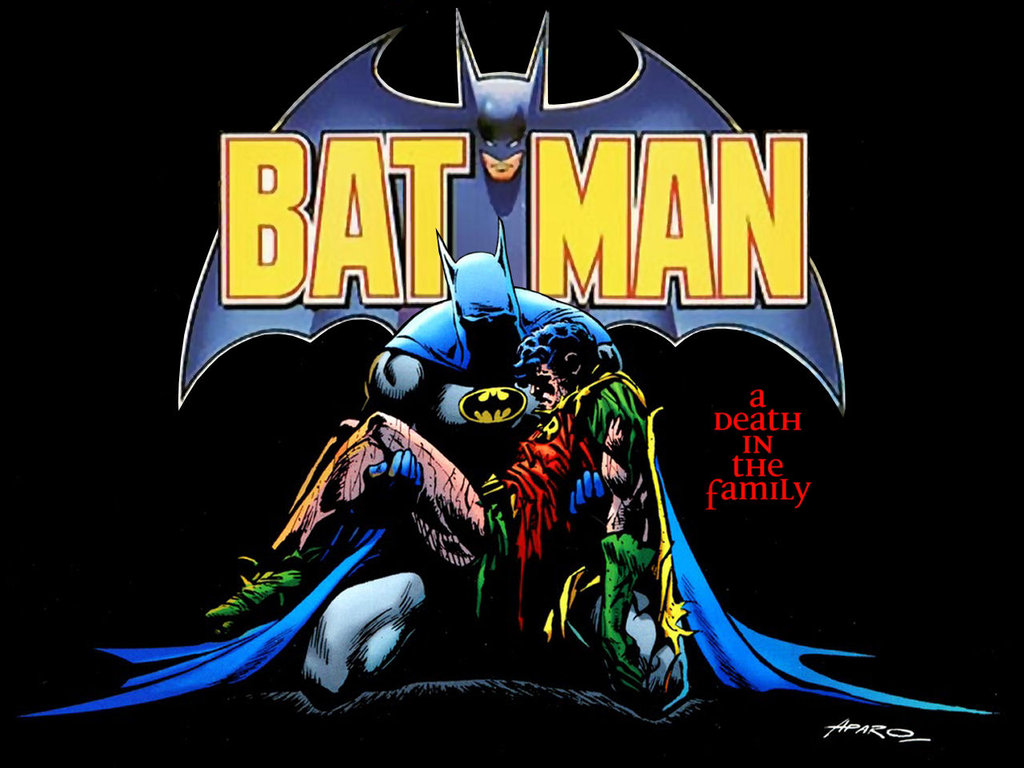 7 More Comic Book Characters We Should Kill Off Via Telephone Hotline!!

Remember the tragic, but somewhat rewarding Batman story, “A Death in the Family?” Yep, the one where Joker beat the ever loving bird-sh*t out of Jason Todd, the very underappreciated Robin#2, with a handy-dandy crowbar and an immensely destructive incendiary device; his newly discovered mother-person handed him over to the perpetually pasty-one in order to cease his incessant blackmailing. Got all that? Good.

However, Jason Todd’s death wasn’t as important as the method used to decide it: voting for or against the character’s demise via telephone hotline. Yep, DC comics knew the brusque and impetuous Jason Todd was disliked by a considerable number of Batman fans, but wasn’t sure how to proceed. The decided-upon solution? Set up a 900 number and have fans vote; it was a democratic, highly effective way to spark fan interaction, and mitigate any negative feedback. Brilliant, and comic companies need to do it more often. In fact, I suggest 7 more characters we should kill off via telephone hotline. Seriously, let’s get them on the chopping block, like, immediately.

Anyway, take a gander. We’ll figure out the actual phone number later, or the proper Twitter account to collectively harass.

Uh, her mutant ability is to launch bright shards of light from her fingertips that, on occasion, crackle and pop. On her best day, this power is an effective distraction while various super-persons with real super-powers fight like super-adults who DON’T sprinkle their enemies with something comparable to very bright cotton candy.

I believe her other power was to appear ostentatiously fashionable. The yellow coat and its towering collar, an obvious nod to a certain Boy Wonder, did not a fashion trend make.

Okay, put down the rocks and pay attention: Barry is about as exciting as buttering toast. Remember when Wally West was The Flash? The blue-collar worker who actually discovered the Speed Force, and learned more about his abilities than Barry ever cared to? Remember Linda, his emotional lighting rod, the one person who brought him back to physical reality after immersing himself in the infinite sea of infinitely infinite speed???

As soon as Barry returned, the exciting drama of a fully realized character with unlimited potential positively flatlined. Barry’s late. He solves crimes. He forgets to meet Iris at CC Jitters (which is now an actual place in the comics, by the way). And heck, he can’t even fashion a costume from raw Speed Force energy. YAAAAWN!

His power, basically, is to produce vibratory shockwaves that…uh…shake things from a distance. Like a tree, maybe.

Sure, when they brought him back in the New 52 he could see into other dimensions due to being caught in the event horizon of a freaking Boom Tube, and yes, Waller mentioned he could potentially vibrate the world to death, but….too little, too late.

Honestly, his career beyond an extra in Breakin’ 2: Electric Boogaloo is really of no interest to me.

As soon as he graces the comic page, my synapses misfire, behaving as though an alligator just latched onto my spleen. Seeing this terrible, Fu Manchu analog with his hokey rings attempt to best Iron Man, the pinnacle of man’s technological achievement and incomparable inventiveness, is borderline insulting.

Yes, it turned out the rings were made by aliens who, in the end, decided against remaining with the hopelessly inept Mandarin and sought out more capable hosts. But, before they came to their senses, Mandarin used these extra-normal implements to rain out Iron Man’s picnics, make his car seat uncomfortably warm, and blow his drying laundry off the line with marginally powerful winds. I’m exaggerating, but yes, the Mandarin just seemed silly, and ill-conceived.

They love each other; they’re murdered; they come back; they find each other, and fall in love aaaaaall over again just before they’re murdered. Wash, rinse, dry and repeat. Oh! But this time, Hawkgirl (or woman) doesn’t necessarily like Hawkman. Relish the newness!

Anyway, between slipping on soap simultaneously, dying by massive head-wound after striking the solid stone, bathroom floor, and the dependable resurrection due to the still, somewhat mysterious properties of Nth Metal, the Hawk-pair finds time to fly, and beat people to death with a mace. So, they’re like you and me, but with wings and a complete inability to gauge the horrendous monotony of their painfully uninteresting story.

He’s an all-powerful Imp from the 5th Dimension, and he can construct or deconstruct worlds on a whim. So, how does he choose to use this immeasurable power? Why, he travels to the 3rd dimension and throws pies at Superman. Or, he sprays graffiti on the inside of Superman’s Fortress of Solitude with things like, “Go f**k yourself, you big-chested, humorless ape with irrational hair!” Or, he tricks Lois into have sex with Jimmy Olsen.

Basically, he’s a supreme a$$-hat and can only be properly defeated through the completion of one of his horribly inane tasks, or by making him say his name backwards. The absolute SECOND the hotline goes up to off Mxyzptlk, I will place the foot of my morbidly obese sister on the redial button and scream “KILL, KILL, KILL” for at least 72 to 4,562 hours.

In the 31st Century, superheroes can actually earn and maintain the “superhero” moniker by possessing completely useless, guffaw-inspiring super-powers. Seriously, these are superheroes the average, three-dimensional, non-penciled and inked Joe like yourself can compete with if you can….

1. Fold a napkin.
2. Sneeze in a tissue.
3. Make a fist.
4. Walk 15 feet without tripping and drowning in a puddle.
5. Turn a doorknob.
6. Remember your first and last name without blacking out.
7. Move the fork successfully from the plate to your mouth without accidentally re-circumcising yourself.

Need some examples why we absolutely have to execute a hefty portion of this completely inane super-team? Fine, you asked for it.

Bouncing Boy: He blows up like a ball..and bounces.

Matter-Eater Lad: He can eat anything. ANYTHING.

Color Kid: He changes the color of things. Yep.

More?? Fine. This one should do it.

Arm-Fall-Off-Boy: He removes his arms and uses them as blunt weapons.

So, any other comic heroes or villains that deserve a telephone (translation: cell/smart-phone) hotline in order to, hopefully, determine their deaths through a majority vote? Let’s hear it!