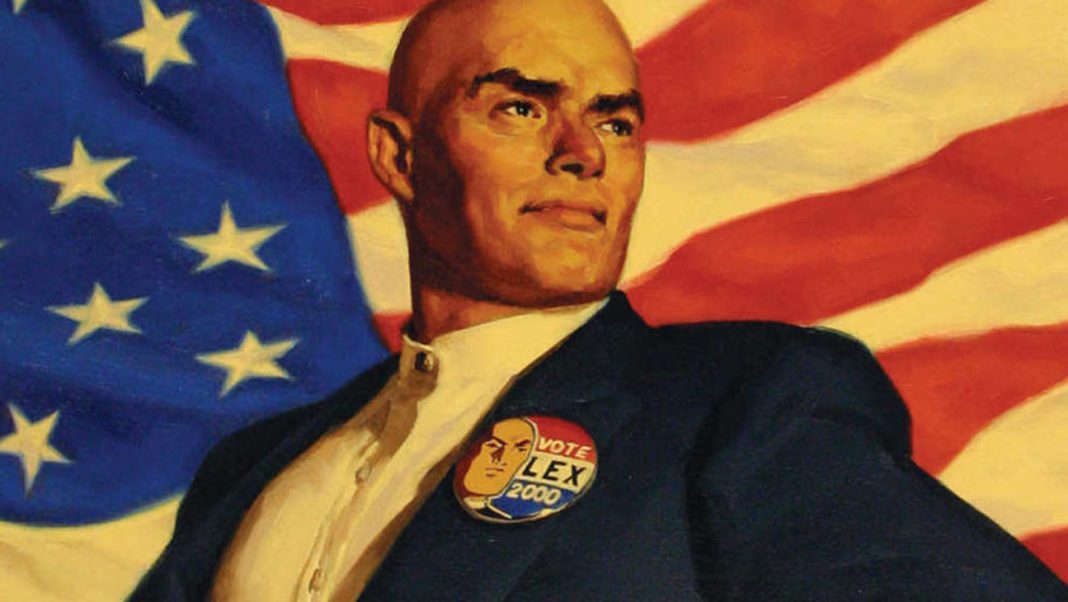 In light of recent, politically charged events, let’s take a look at some of our favorite superheroes and super-villains who have, at one point or another, held some sort of public office. Not even comic book characters are safe from dirty politics, and apparently, comic book citizens need governance, too, right? Here’s a quick look at 11 heroes’ and villains’ political careers—however brief or imaginary.

In Earth-20604, Mark Millar and Greg Land created a mind-blowing reality where the Odinson, despite not being an actual US citizen, became the POTUS. Yep. In Ultimate Fantastic Four #27, President Thor pretty much gave away free superpowers to anyone who wanted them through Skrull Pills, because there’s no possible way that could backfire, right? The answer lies in issue #29, and it’s not very pretty.

Ultimates #15 had good ol’ Cap winning a special election to become the president, because everyone thought it made so much sense—he’s practically wearing the flag already (and he’s got “America” in his name, for goodness sake). While it would have been awesome to have Steve Rogers go through a second term, he resigned after a Californian conspiracy. Guess we won’t be seeing him in the Oval Office on the big screen any time soon.

He’s all about truth, justice, and the American way, so why not make him the president while we’re at it? Never mind that he’s an alien—he’s already saved the White House too many times to count. In Grant Morrison’s Final Crisis #7 (March 2009), Earth-23’s African-American Superman Calvin Ellis (a play on Kal-El) not only ran a whole country, but he also had enough spare time on his schedule to fight crime as a hobby. He effectively saved people both with or without his costume—now that’s a true super-man right there.

Dating back to 1943, Wonder Woman not only was the ambassador to Man’s World, but she also became elected as the leader of the free world. In the year 3004, Steve Trevor was initially elected, but it was discovered that the results were affected by corruption and vote-tampering, which is why Wonder Woman solved the fraudulent election by becoming the President instead. Ah, politics.

Are we just throwing this title around now and giving it away to anyone? Given that Lex has always been a power-hungry megalomaniac, I suppose being the President is inevitable for him. But because he’s totally crazy (he injected himself with Kryptonite and tried to kill Supes), his illegal and unspeakably evil deeds were soon unearthed and his presidency only lasted for three years. Still, he did do something right, as he appointed Black Lightning as one of his cabinet members. Oh, and Pete Ross was his VP. Someone should definitely make a movie out of this.

Having a super-cool Avenger as the U.S. Secretary of Defense is actually a pretty awesome idea, but then Scarlet Witch had to ruin it all by making Tony go on a drunken tirade at the United Nations, effectively getting him fired from the position. But honestly, did she even need magic to do that? It was only a matter of time before Stark showed his Stark-ness and screwed up a fancy politics meeting all on his own.

I would definitely love to see J.J. as Mayor on the big screen, because why the heck not? In 2009, he ruled The Big Apple with an iron fist by making sure that his sole purpose in life was fulfilled—to prove that Spider-Man was a menace, aided and abetted by his Anti-Spider Squad. A Spider-Slayers scandal eventually got him kicked out of office, which is a darn shame. I’m pretty sure everyone would have loved to see that glorious mustache for another term.

CW’s Arrow based this storyline on the actual comics, where Oliver Queen really did become Mayor of Star City during the One Year Later event. Sadly, because he was secretly funding the superhero team The Outsiders, the scandal made his position extremely rocky, too. It’s probably all for the best—pretty soon, everyone would have found out that Ollie was secretly Green Arrow. After all, who could ever miss that goatee?

During the pre-New 52, the Justice Society of America series had Jay Garrick as the Mayor of Monument Point. There really wasn’t much that happened during this time, but it would be interesting to see the producers adapt this storyline into CW’s The Flash. Any screen time with John Wesley Shipp is good screen time, after all!

So this one is pretty common knowledge, as Harvey used to fight the good fight before he became the cray-cray villain, Two-Face. And thanks to Aaron Eckhart, everyone knows Dent’s backstory. Harvey actually proved to be a very useful ally in politics for Bruce, but then tragedy struck and now he’s just another loony to add to Batman’s rogues gallery.

Not everyone knows that before Barbara Gordon got shot in the pre-New 52 storyline and became Oracle, she was a congresswoman—and on Capitol Hill, she made a difference. Not everyone needs to fight crime by beating up bad guys while wearing spandex and jumping off buildings. In fact, in the upcoming Lego Batman Movie, Babs is the police commissioner instead of her father. Talk about Girl Power!

Did we miss any of your fave comic book characters who had brief stints in politics? Who are your best bets for 2020? Sound off in the comments below!