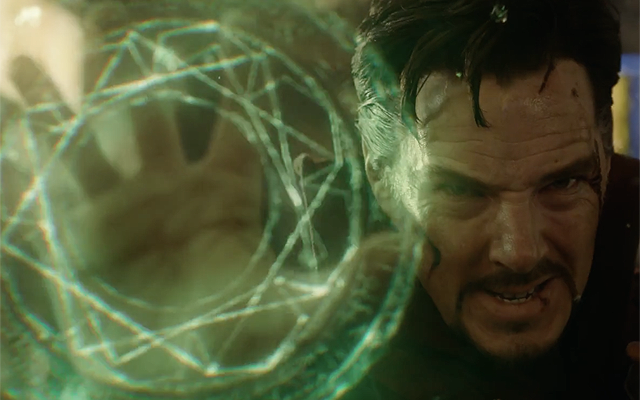 The Doctor is in! Doctor Strange has hit theaters and has quickly impressed audiences everywhere! I’ll admit I’ve never been that big a fan of Doctor Strange, but this movie has changed my mind! It’s given me some newfound respect for the Sorcerer Supreme. I feel the film is actually a great retelling of Strange’s origin and brings a new element to the MCU. There are a lot of good things to talk about, so I thought I’d share some! So, without further ado, here are my four favorite things from Doctor Strange!

Magic’s never looked…so psychedelic! We all saw some of this from the trailer, but it has to be seen in theaters to be appreciated. It really gives sorcery some personality when you see how everyone can twist and turn reality itself. You think this would get old quick, but it doesn’t, and the more we see, the more we want of it!

I think the best displays if this power were Strange’s mini-journey through the multiverse and that bad-@$$ city fight! These scenes don’t hold back and deliver imagery that makes us wonder if something was in our popcorn! If there’s one thing that immediately stands out in this film, it’s the reality-warping special effects.

2. The Cloak of Levitation!

I gotta get me one of these!! It’s weird how they could add personality to a cape, and to such a degree, it’s kind of a character in and of itself. There are actually a few scenes where this garment gets a laugh or two!

Doctor Strange’s magical cloak is like a puppy…that you can wear….and makes you fly!! There needs to be a post-credits scene in the sequel where the cloak and Mjolnir are just hanging out. I can’t be the only one who wants to see that, right?!

3. A Road of Redemption!

As I said before, I believe this movie’s a great retelling of the early days of Doctor Strange. Part of that includes Strange having to redefine himself as a champion of magic after being such a selfish surgeon! As the film goes on we see him have to pick up the broken pieces and rebuild himself. From that, you can see him become a better person as he becomes a hero and Sorcerer Supreme!

These kinds of stories help give the idea that people really can change and that’s a lesson worth learning! You can even say that moral is a two-way street considering Mordo’s turn towards the end! There may be many tales of redemption in fiction, but Doctor Strange definitely has one with more magic than most!

One of Doctor Strange’s greatest foes, Dormammu, is not someone easily defeated. He’s an immortal demon and practically a god in his own dimension. Which is why it was awesome and pretty funny when Strange pulled a “Groundhog’s Day” on him!

Knowing he can’t win against Dormammu, Doctor Strange introduces the monster to something he’s never known: time!! Strange then dies over and over, pestering Dormammu until he’s forced to stop! Basically, this was a battle of “Is this bugging you, I’m not touching you! Go away and I’ll stop!” It’s a pretty “out of the box way” to win the day to say the least, and not many can say they defeated a demon by annoying it into quitting.

This scene’s quickly become one of the standout moments of the film and it’s easy to see why. A unique climax to a unique superhero movie!

What did you think of Doctor Strange? What was your favorite part of the movie? Let me know in the comments below!