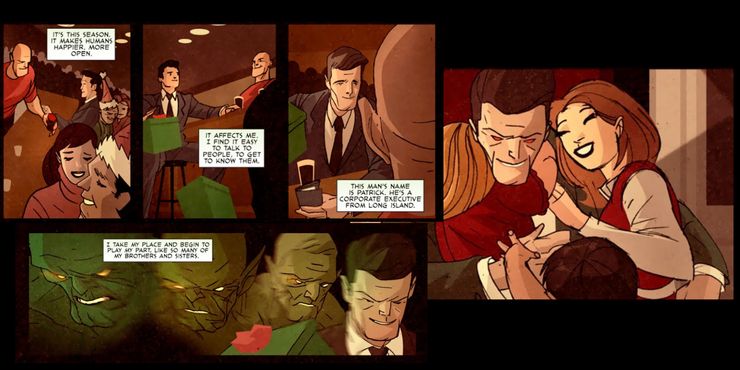 Who says Logan can’t postpone his brooding when the lights are up in Tinseltown, or that Spider-Man can’t take a break from keeping the neighborhood safe on Christmas Eve? Our favorite masked vigilantes may be working round the clock to keep the bad guys at bay, but there should still be some time for a Christmas carol or two or even some love under the mistletoe.

In the midst of all the Christmas specials and holiday-inspired shows on TV and the big screen, the colorful pages of our favorite comics have their own fair share of holiday cheer too. Check out these memorable stories as you snuggle in front of the fireplace with a warm cup of chocolate and a whole lotta love this month.

In Last Christmas by Ryan Penagos and Juan Doe, readers can relive the Secret Invasion event as they follow the story of a Skrull who ends up trapped on Earth when the Annihilation Wave destroys his homeworld. As the Skrull spends the holiday season on Earth, he befriends someone in a bar over a hearty drink, and assumes his identity after killing him. It doesn’t exactly give you warm and fuzzy feelings, but it does highlight the fearsome reality of the Marvel Universe at the time despite the lack of a happy ending.

2.  Twas’ The Fight Before Christmas by Darwyn Cooke and J. Bone

When you put a hilarious story about our friendly neighborhood wallcrawler and the vibrant art of the creative team of Darwyn Cooke and J. Bone, you can be sure to delight in a holiday romp that’s one for the ages. In Twas’ The Fight Before Christmas, Peter Parker takes a supposedly uneventful trip to the mall to get a gift for J. Jonah Jameson, and ends up having to face against a horde of mind-controlled last-minute shoppers.

Some Christmas stories are strange, all-too-common, or even dark and disturbing. Some, however, touch the heartstrings in just the right way. Some, though, are just there for the fun factor of it all, and I’ll Be Doom For Christmas – What The…?! #10 by Scott Lobdell and John Byrne does just that.

In this oddball of a story, Doctor Doom is tasked to deliver toys on Christmas when he catches Santa Claus himself in a trap. With a fake beard and a costume, Doom then goes to work where he even ends up fighting the Fantastic Four. When the deed is done, Santa rewards him by telling him he would give Doom his heart’s deepest desire, but Doom refuses and tells him he already did. Santa then leaves, and we see the “new monarch of Christmas, Santa Doom” hug a teddy bear a child gave him when he was doing his job. It’s a sad moment, really, but it’s still nice to know that even Doom has a soft spot in his heart for kids and the holiday season.