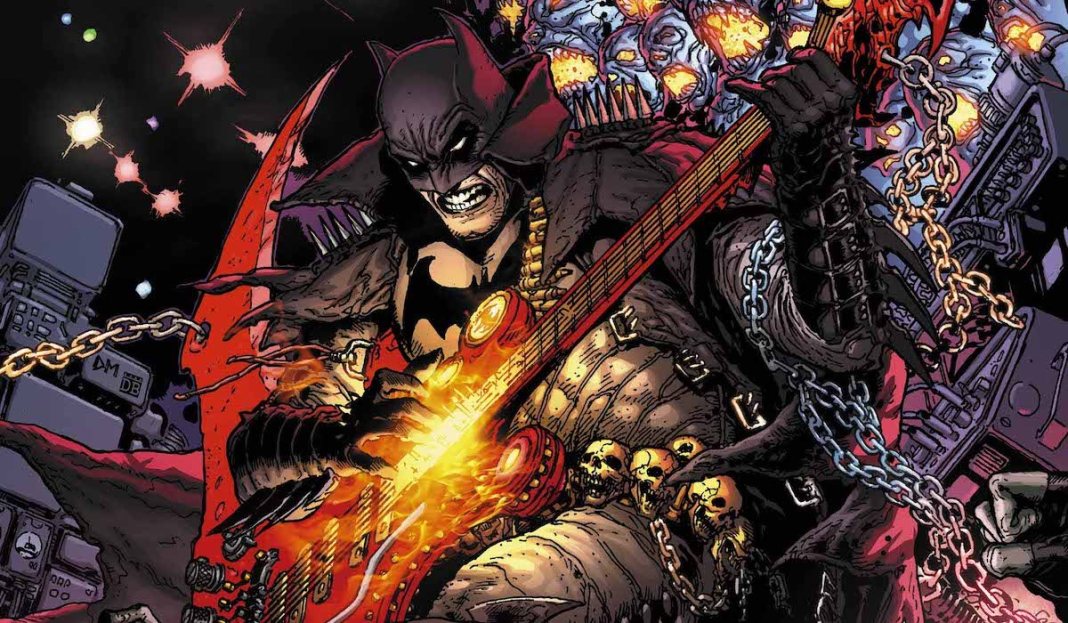 When Dark Nights: Metal pretty much told the superheroes of DC Comics that they’re all basically screwed, fans clamored for more – after all, we just can’t get enough of seeing the Justice League go wild when they’re totally in over their heads. Dark Nights: Death Metal is the super sick, super rad follow-up to that big event, and here’s why you should get in on the action right now:

A twisted version of Batman from Earth-22 of the Dark Multiverse, The Batman Who Laughs is a combination of Bruce Wayne’s intelligence and physical strength and the Joker’s psychopathic behavior, making him one of the most formidable villains the universe has ever known. In Dark Nights: Death Metal, he continues his reign of terror with a league of corrupted Batmen, which includes a Tyrannosaurus Rex version of Batman named B-Rex. In a hilarious conversation with Diana, B-Rex reveals his origins as to how he came to be the Caped Crusader:

Diana: Bruce uploaded his consciousness into the robot dinosaur in the last moments before the cave collapsed on him and so on. I’ve heard it all before. Doesn’t make you Batman.

Diana: Can you throw batarangs with those tiny arms?

B-Rex: They’re proportional, and I…I am working on it.

Batman commissioned Hiro Okamura to recreate the evil Dark Knights (The Merciless, Murder Machine, Devastator, The Drowned, Red Death, and Dawnbreaker) to fight the good fight. Even better than that is the Trinity Robot, which is an amalgamation of Superman, Batman, and Wonder Woman in one Voltron-esque mech that’s meant to be both hilarious and totally badass – which is really the point of the whole series for creators Scott Snyder and Greg Capullo.

“For all of us, Dark Nights: Death Metal is about the fun factor. Comics should be fun, bombastic, and over-the-top. This series is going to be exciting and jam-packed with great ‘metal-esque’ moments that will make fans lose their minds when they see them,” Capullo says.

As if the events of the crossover event aren’t outrageous enough, a simple press of a frowny face button pin revealed the so-called “Final Bruce Wayne”, which combines both Bruce and Dr. Manhattan from Watchmen. And if they can do that, then anything is possible! We already have a monster truck Batman, an Atom Batman, and even a baby Batman (he’s not technically a man, so it’s “Batbaby”, then), and at this point, anything is up for grabs. The whole thing is just so weird, it’s good.

What do you think is in store for us for the rest of the series? Who else – or what else – can Batman possibly turn into (and what else could the Dark Multiverse have up its sleeve)? Let us know what you think in the comments section below!