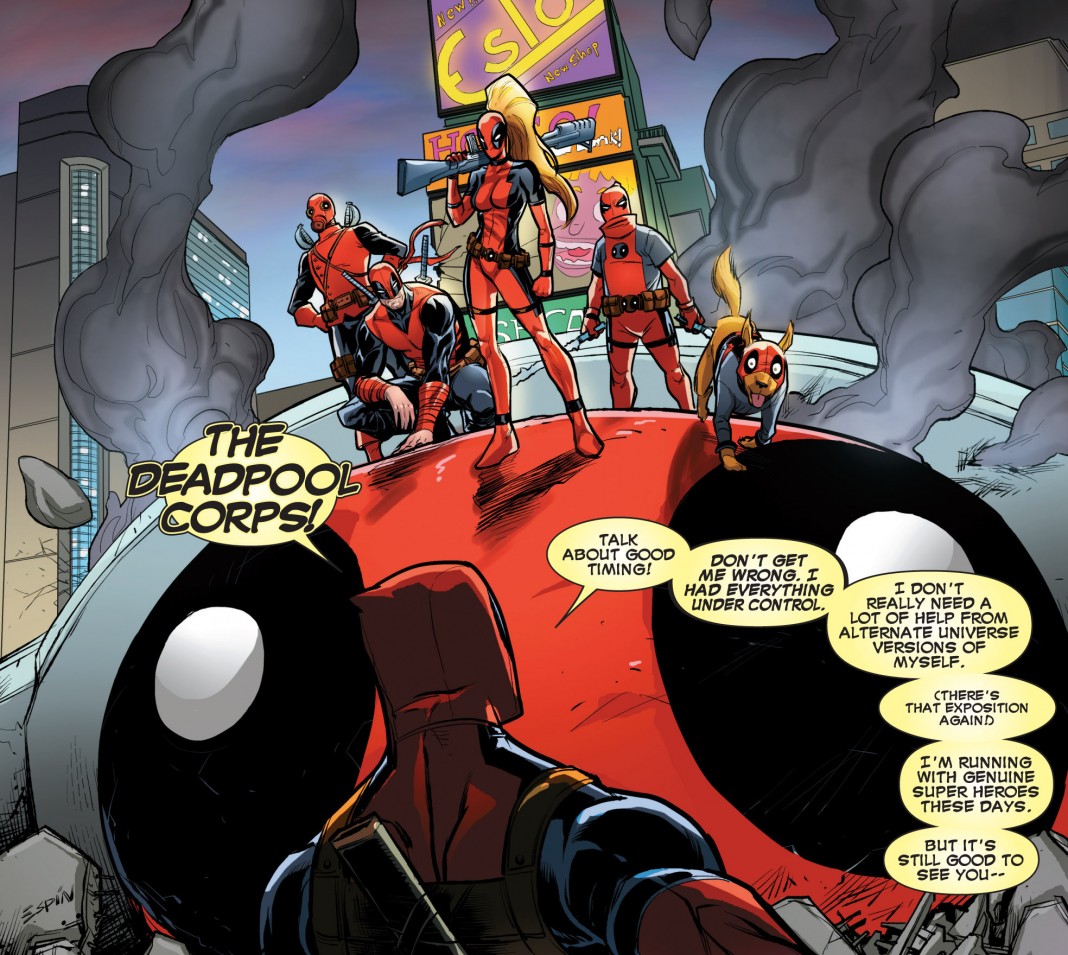 Deadpool has exploded onto the big screen with his own movie, and it’s as glorious as it is insane and hilarious. Whether the movie has made you into a recent fan or has fired up old fan muscles, you’re probably hungry for even more of the merc with a mouth, right?? Well lucky for you, I have 5 Deadpool stories I can recommend to scratch that itch. So grab your swords and chimichangas as we take a look at five story arcs/graphic novels where our favorite regenerating degenerate is as fun, violent, and Deadpooly as he can be.

Deadpool: Suicide Kings is more of a self-contained storyline that doesn’t require too much knowledge on Deadpool’s history to enjoy it. It’s definitely a good example of Deadpool’s everyday life with some pretty good guest stars that bounce off Deadpool’s personality well in the form of the Punisher, Daredevil, and even Spider-Man. Suicide Kings is also a very good beginner story for anyone who wants to get into Deadpool comics, so if you want a good starting point with a lot of action and humor then this is the story for you.

These thirteen issues take Deadpool’s normal menu of mercenary adventures and add ten more flavors of insanity to the mix. We also get to see some pretty interesting locations where Deadpool travels through dimensions, and we see how he interacts with these different worlds…which is so enjoyable. All that just makes this story a fun ride. With dinosaurs, alternate universes, and a whole lot of zombies to fight, Deadpool Merc with a Mouth: Head Trip is a must-read for anyone craving that Deadpool brand of excitement.

So what’s cooler than Deadpool fighting off a horde of zombies? Fighting off a horde of zombie presidents, of course! After a botched necromancy spell, all the dead U.S. Presidents come back from the grave and they are not happy. Now with America in trouble, S.H.I.E.L.D. will call upon only one hero to stop them…and then realize they need someone more expendable so they get Deadpool.

Brian Posehn and Gerry Duggan’s run on Deadpool, available in trade paperback collecting the first 6 issues, starts off with a bang; a premise so insane that it perfectly matches Deadpool himself. Deadpool’s creative style of executing each of these zombies is both exciting and really funny, which is exactly what you want to see in a Deadpool comic. I also want to mention this was the start of a more dramatic and sympathetic chapter in Deadpool’s journey, and seeing how the story progressed from crazy to serious was pretty interesting in itself. Packed to the brim with insane zombie kills and humor, Dead Presidents is a great start to a great run in Deadpool history.

While the miniseries delivers on big action and laughs like any Deadpool story should, its heart lies in the romance between Deadpool and Shiklah. Their chemistry is surprisingly very entertaining and as a couple their personalities complement each other. It’s nice to see Deadpool finally get a real chance at love and that their relationship still exists after the story is done. Having good romance, hilarious dialogue, and monster-sized action, Deadpool: Dracula’s Gauntlet is the kind of book best read on Halloween or Valentine’s Day.

And here’s a Deadpool merchandise overload, so we can effectively overload the overload.