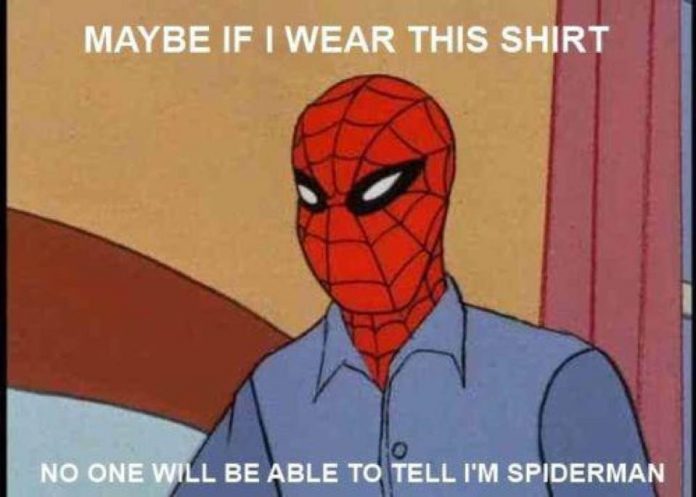 Aside from the horrible Tobey Maguire dance in Spider-Man 3 that’ll make you hide yo’ kids and hide yo’ wives, there are actually weirder things that happened to Spidey in the course of his extensive comic book history. So, here are some of the weirdest Spider-Man storylines our friendly neighborhood superhero endured—and for the love of all that is good and holy, may they never grace the big screen ever.

The four-issue mini-series Spider-Man: Reign has a senior citizen Spidey defending against a gang of his greatest foes. Throughout the whole story, Peter Parker is haunted by the memory of his dead wife Mary Jane, who died of cancer. Here’s the clincher, though: Spidey himself caused Mary Jane’s cancer due to his radioactive bodily fluids polluting her body in ways that we don’t even want to know about. We kid you not. It looks like we can add Spider-Semen to his list of super-powers now, right?

If, like me, you’re wondering what happens to all that webbing Spider-Man leaves around New York City, effectively prompting street cleaners and building owners to curse him forever, fret not. The first annual from The Amazing Spider-Man (1964) explained that the web fluid only lasts for an hour before it evaporates, so rejoice, people of New York! Still, we’re not sure if the time limit is applicable if the web-shooters are organic, just like they were in The Spectacular Spider-Man #15 (2004) where Peter Parker mutated into an actual, giant spider. I shudder to think of the implications of having a humongous, human-sized spider swinging around town every day. Ick.

To be fair, it was a Public Service Announcement comic. But the 1976 treasure that was The Amazing Spider-Man vs. The Prodigy centered around the evil alien Prodigy who wanted to trick teenagers into having unprotected sex so that the whole human race would be slaves to their own babies. Yep, they wanted adults forever changing diapers, and babies working in the Prodigy’s forced labor camps. Oh, the horror!

With his daring ability to suppress memories of childhood molestation, Spider-Man once counseled a student by sharing his own deep, dark secret—that he was molested by a high school student when he was just an unsuspecting kid. Now anyone who’s ever read Spider-Man Power Pack #1/1 will be forever haunted by the image of their favorite web-slinger being manhandled in a variety of oh-so-horrible ways.

When a story starts off by revealing that the Spidey you’ve loved all these years is nothing but a fake, then you can tell that the writers are probably as lost as you are. The Clone Saga even killed off Aunt May, and we have no idea why you would do that to a lovable old lady. If you even mention Ben Reilly to a die-hard Spider-Man fan, you will likely be punched in the face. We’re glad it’s all over, and let’s all just think of it as a bad dream that’ll hopefully never happen again. NEVER again.

What are the weirdest Spider-Man comic book adventures in your opinion? Did we miss anything on the list? Let us know what you think, Spider-Fans!