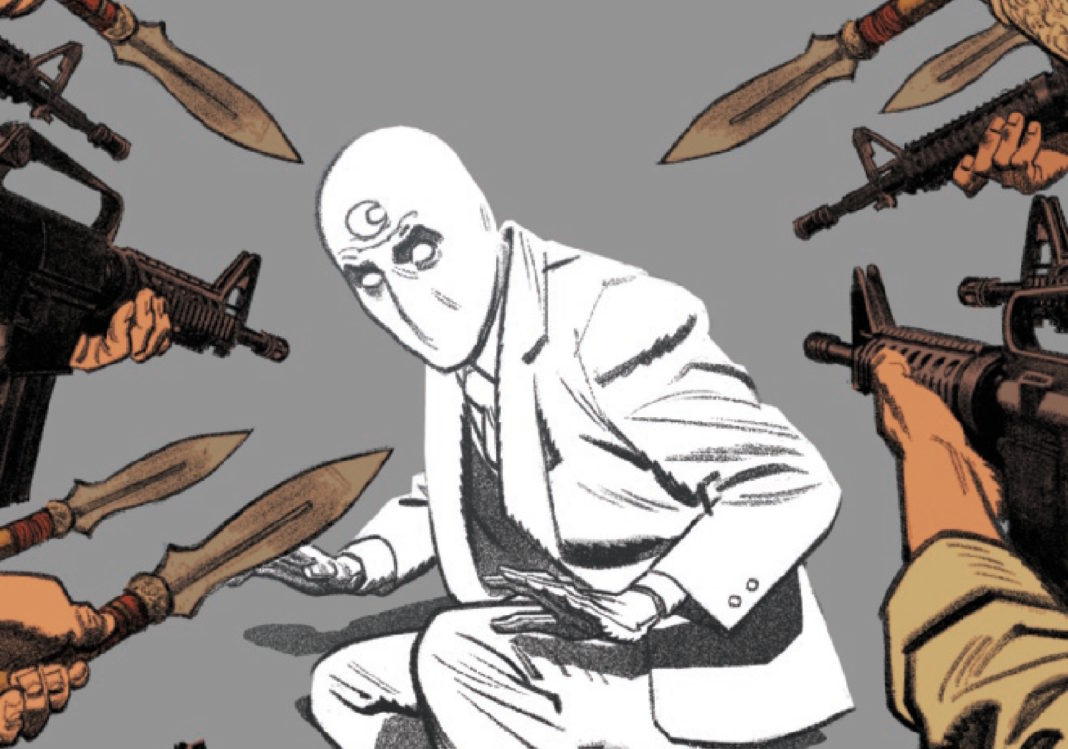 As always… Spoilers Ahead!

Here we go again; a new month means a new issue of Jeff Lemire’s Moon Knight. After diving deeper into the psyche of Marvel’s maddest hero, Lemire has taken readers on a psychedelic journey into the obscure overvoid and through a (mostly) heartwarming trip down memory lane. While showcasing the origins of Marc Spector, from dream-filled boy to multi-personality mercenary man, Lemire has set up his current arc for an epic conclusion. This month, The Source noted a few more elements leading to quite the finale in the most exciting issue of the current arc, “Death and Birth.” As always, we recap the story, give you our analysis, and ultimately let you know how it is in this, The Source‘s Moon Knight #12 review.

When readers last saw Marc Spector, aka Mr. Knight, in the overvoid, he was about to be the subject of a sacrifice. You can’t just jump into transcendent Egyptian worlds uninvited, especially with the intention of stealing something for Anubis; they don’t take kindly to that. As Marc struggles to break free, in typical comic book fashion he is saved at the last possible moment by someone he can always count on: himself.

Being just as confused as you are, Marc questions how he, the man behind the Moon Knight mask, can be saved by Moon Knight. After all, he killed his alternate personalities — Jake Lockley and Steven Grant — a few issues earlier in order to regain his sanity. Despite this, the new Moon Knight turns to him, replying, “You didn’t think you could get rid of us that easily, did you, Spector?”

At the turn of a page, the reader is back in past, witnessing Marc and Jean-Paul doing the business all mercenaries do. Costumes, guns, drugs, code-names, and as- kickings conquer the narrative now as Marc attempts to find a heroin dealer by the name of The Wolf. After taking down a warehouse and capturing The Wolf, Marc escapes with Jean-Paul in a helicopter, of course — it wouldn’t be complete without one. As they fly from the gunfire, The Wolf warns Marc that money will never make a broken man like him whole.

Back in the overvoid, each of Marc’s personalities play their part. Lockley in the guise of Moon Knight fights the locals, Steven Grant rescues Anubis’ wife, and just as all hope seems lost, space-pilot Marc Spector arrives with flyin,g half-moon-shaped transportation. Thanks to his alternate identities, Marc is able to free Crawley from Anubis’ clutches, finally fulfilling his promise. Just before they leave, Marc thanks them, and in turn, they warn him that he is the only one with a chance to survive whatever the future holds.

For the last time, the book returns to the past. Jean-Paul and Marc deliver The Wolf but stick around to hear a potential business opportunity from “The Boss.” After arguing about whether or not it’s worth their time, Marc furiously decides to meet this boss. SURPRISE: this boss is no nameless, generic fiend; he is Bushman, Moon Knight’s oldest and greatest enemy.

To be frank, Jeff Lemire has a slow-paced writing style, which can be irritating yet rewarding. In the case of Moon Knight #12, it’s rewarding. His stories are at their best when elements and characters from past issues return, but to do things like that, he has to pace the issues just right. Usually, he does a great job, but there can be times when the build seems redundant and goes on FOREVER. Fortunately, Lemire was on top of things this month, bringing back Marc’s alternate personalities for a rescue and even sneaking in an appearance from Bushman. Hopefully, with Bushman’s addition to the series, the next two parts of the “Death and Birth” story-arc will feature a clash between rivals in both the past and present, setting Marc up for his inevitable showdown with Khonshu.

Until next month, thank you for continuing to check out The Source‘s Moon Knight reviews! Be sure to keep checking us out for more reviews and news on all of your favorite heroes and villains!