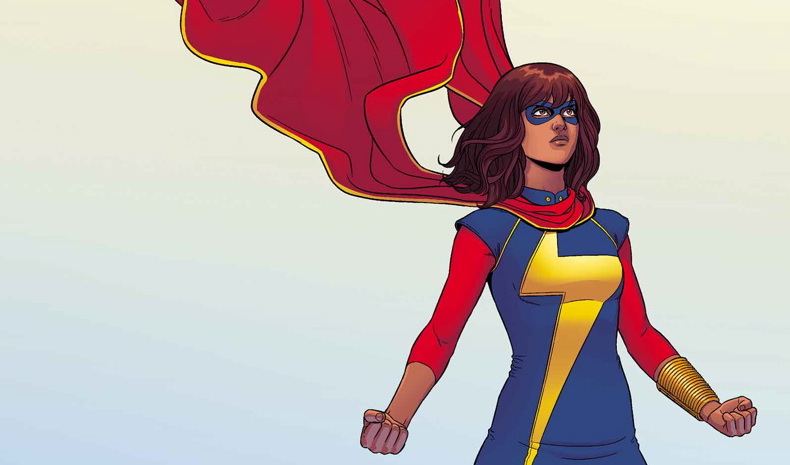 Just over three years ago, Marvel Comics introduced one of their greatest heroes — not only in the vein of legacy characters but in their universe’s entire lineup — as a response to the underrepresentation of Muslim characters in comics. Yes, Kamala Khan filled a much-needed void, yet her unique call to heroism, under the pen of G. Willow Wilson, allowed her to become much more than just a one-dimensional answer. In her first story-arc alone, Kamala brilliantly embodied a multitude of character traits and roles missing from modern comics, taking her on an evolution unlike any before.

Superheroes, in general, have always embodied an ideology — something for a reader to look up to or admire. Whether it’s Superman as truth, justice, and the American way, or the Punisher’s need for justice at any and all costs, readers attach themselves to these ideals. However, it’s not just ideals, fashionable costumes, or a cleverly crafted emblem that draw readers to a character; power and personality are a must.

All superheroes are inherently fantasies in these aspects — for both girls and boys, men and women. When we see Iron Man soaring across the silver-screen or control Batman in any of the Arkham video games, we feel an attachment to them, not just for our shared interests in justice and morality, but because we all — in some way — want to be them: what’s not to love about a billion-dollar bank account, cool cars, fancy suits, and even fancier super-suits?

These elements of fantasy and the fantastic have kept comics alive for decades, despite their inevitable dive into realistic worlds with realistic consequences. For this reason, Kamala Khan is more than just a brown face filling an empty space in an overwhelming white place; she is a superheroic fantasy for those who need a fantasy the most: the underrepresented populations of Muslims, Pakistanis, and even millennials in comics and beyond.

In the first five issues of her 2014 solo series, dubbed “No Normal,” Kamala Khan captured fantasy and reality for these groups by facing a flurry of problems stemming from her own identity. On the opening page alone, Kamala struggles with her desire to eat bacon, a food forbidden in Muslim culture. Yet as the pages fly, the reader learns more about Kamala and the real-life dilemmas she faces as a millennial-Muslim-Pakistani girl just trying to fit in, trying to find a balance between who she is and who she wants to be.

In every panel on every page, Kamala is facing a different, personal struggle: do homework or write fan-fiction, observe her religious traditions or go to parties and eat bacon, be respected by her parents or by her peers, or even love herself or keep dreaming of being “beautiful” and “blonde.”

With such a focus on these aspects of identity, the first arc of Ms. Marvel serves as a coming-of-age story. Kamala slowly learns to accept herself while simultaneously accepting her powers and what they mean.

Side by side, G. Willow Wilson explores what it means to love oneself and to possess the power to create change, making Kamala much more than a one-off, one-dimensional, mini-series-style character. Artfully, Wilson crafts an all too relatable story for this Ms. Marvel, making Kamala a hero not just for Muslims, Pakistanis or millennials, but a hero for everyone — everyone who knows what it means to ask the question, “Who am I?”

In this way, Kamala Khan has become a new Peter Parker for a younger generation. 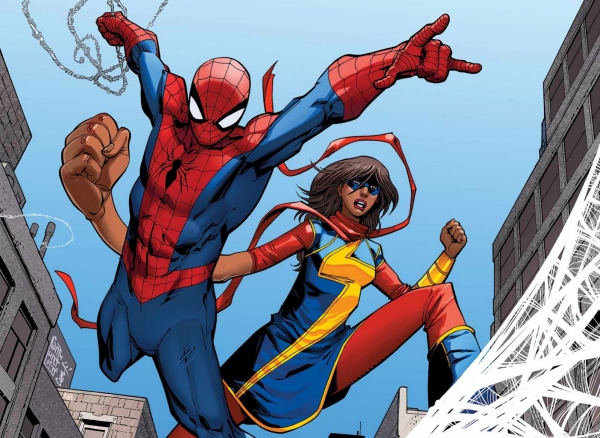 Presently, Peter Parker has lost what made him so lovable and relatable: his real world struggles. A high school loser who once tried to balance homework, a girlfriend, a job at the Daily Bugle, and superhero duties is now the homework-less, single CEO of the successful Parker Industries. Sadly, this evolution has turned him into the new Tony Stark, complete with this company and the funding of the Avengers. However, Kamala — with her protective parents, religious obligations, homework, friends, and fan-fic followers — now captures that element of real world problems and the duties that stem from leading a double life.

Fortunately for Kamala, since she is not the first to utilize the Ms. Marvel moniker, she is still Kamala first and Ms. Marvel second. When considering this order, we recognize her real world obligations before those of an inhuman superhero, causing us to relate to the person on the pages. In this sympathetic communion we find solace in knowing that we are not alone, that we all struggle sometimes, superhero or not.

That’s the beauty of the relatable character, and now, it’s a responsibility for the new and improved Peter Parker: Kamala Khan — a fact Spider-Man himself confirmed. In 2014’s Amazing Spider-Man #8, the wall-crawler had some words of inspiration for Kamala after their team-up, acknowledging this fact:

However, Spider-Man isn’t the only one to notice; readers quickly found this truth themselves and embraced it happily. In relating to a hero again, comic book buyers caused Ms. Marvel #1 to have six printings, a feat which has only been achieved by a few iconic titles.

However, since this first, defining story-arc, Kamala Khan has taken on a much larger role within the Marvel universe and within our own as well. As a hero, she has gone from someone considered an unknown, wannabe Ms. Marvel to an Avenger, and finally to a founding member of the teen team, Champions. With each issue and each life saved, her popularity has soared, even outside the comic book community.

Kamala Khan’s existence as a Muslim superhero has made her not only a symbol of heroism but of protest within our own world. Whether you, as a reader, personally agree with it or not, her unintended jump from the pages of colorful comics to the world of partisan politics cannot be ignored and speaks volumes of how vital she is to her fans:

Although the “Kamala Khan for President” sign could easily be written off as a joke, not necessarily a symbol of protest, images such as this cannot be:

Superheroes, from both the Marvel and DC Universes, are no strangers to political issues and often embody their stances on certain issues, but none have ever made quite the same jump into our world like Kamala has. Given this unprecedented impact, especially in such a short period of time, there is no questioning the significance and inspiration readers have found from this hero. In doing so, they have reflected not only on their own lives and their country but on the very nature of what it means to do good. 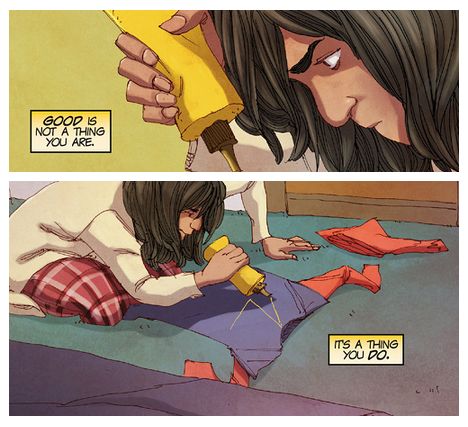 With all of this in mind — Kamala’s significance to the underrepresented, her relatable nature, and her evolution into a political symbol — it should be no surprise to anyone when we see more Kamala Khan in the future. Whether it’s in more of our favorite Marvel comics, the Marvel Cinematic Universe (that’s right. You didn’t think they’d leave her out, did you?) or even at a protest in our hometown, Kamala Khan is truly an icon, one who will inevitably leave a lasting legacy of empathy, tolerance, and pure, heroic awesomeness.

From all of us here at The Source, thank you Kamala Khan for the last three years and the impact you have made. And an extra thank you to your visionary creators: G. Willow Wilson, Adrian Alphona, Sana Amanat, and Stephen Wacker.