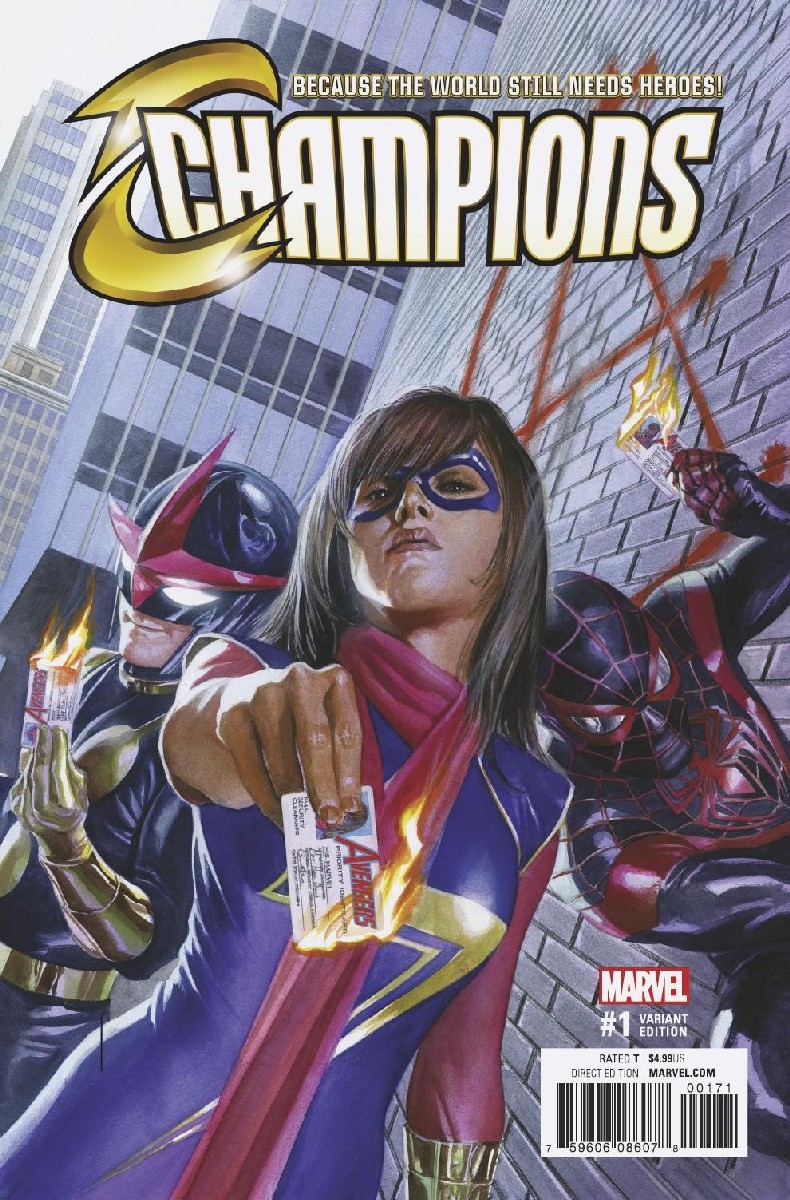 Check out Our Review [WITH SPOILERS] of Champions #1

It’s been awhile since Marvel fans have gotten to thrill to a team known as The Champions. But now, the Champs are back in a very different form than the Angel, Iceman, Hercules, Black Widow, Ghost Rider team of the Bronze Age.

This team of Champions is basically Marvel’s latest attempt at a New Warriors-type team, but this squad of youthful heroes is in no way derivative. This team consisting (so far) of Ms. Marvel, the Totally Awesome Hulk, Nova, and Miles Morales seems like something fresh and new. The four heroes form together in response to some very contemporary problems and Mark Waid has found a voice for each of these distinct and welcomingly diverse heroes.

The first issue of Champions centers on Kamala Khan, and through her, readers learn the new team’s mission statement: to return the idea of heroism to superheroes. To serve and protect rather than punish, to be the heroes that will help humanity rather than the heroes that battle each other. It’s all very welcome in the age of Civil Wars and conflicts between heroes, mutants, and Inhumans. The Champions are a return to themes and philosophies that the Marvel Universe was built on, and it’s all done through some very new and fresh heroes.

That’s not to say that Champions is a throwback retro title designed to appear to gray-haired fandom. The villain the team faces in this issue, a sex-slaver clown named Pagliacci, is terrifying in his modernity, in his complete disregard for the sanctity of basic human dignity. Pagliacci might as well be a member of ISIS or a Boko Haram fighter, but the Champions don’t punish him, they save his victims and arrest the clown, because that’s what heroes do. Protect.

I look forward to Mark Waid’s exploration of these characters. Waid has basically played with every Marvel icon over his great career, so I look forward to seeing what Waid can do with characters that don’t have a very long history. It seems like other young Marvel heroes like Riri Williams and Moon Girl might be joining the team soon and I would love this book to be to the modern era what Wolfman and Perez’s New Teen Titans was to the 80s.

This issue is not decompressed and we have most of the team together by issue’s end. Heck man, in some team books, the complete team doesn’t assemble until the seventh issue.

Humberto Ramos is the perfect artistic choice as his characters have a wide-eyed innocence and inner strength. With Ramos on art, and the team in place, this looks like it could a very fun and central series to the current Marvel Universe.

At times, the politics of this first issue is a bit on the nose, but that does not detract from the fact that Champions is a book to watch and a team that could go places no teen team of heroes has ever gone before