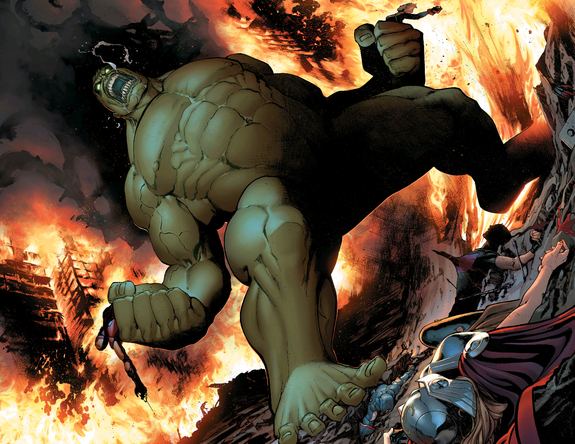 Check out Our Review [WITH SPOILERS] for Civil War II #3!

Civil War II #3 is a complex issue to review and recap. On one hand, it’s a gorgeous comic filled with tense and engaging character moments that feel important. The only issue is, is it important? Will all the major shakeups stick? Of course they won’t, and in a way Civil War II represents everything wrong with current comics.

First off, Civil War II is selling like a beast and at the end of the day, that matters more than anything I have to say. That matters to the company, to the creators, and to comic shop owners- that keeps the doors open and the lights on, so I don’t want to dismiss the importance of sales. The problem with the comic is not the quality, it’s the purpose. If this book was shoddily written or illogical in plotting and character, Civil War II would be easy to dismiss. But it’s not. Bendis and Marquez bring their A-game and imbue the main players with an engaging pathos that keeps the readers laser focused on what happens next.

So let’s get to the spoilers, shall we?

In this issue, Ulysses predicts that Bruce Banner will turn into the Hulk and do something terrible. Tony Stark, Carol Danvers, and the rest of the heroes race to meet with Banner to confront him about some disturbing experiments he has been conducting on himself.

Banner gets angry and it seems like Ulysses’ vision will come to fruition- when Clint Barton Hawkeye murders Banner.

So Bruce Banner is dead and Hawkeye is essentially a murderer. Except for the fact that, as told by a wonderfully executed flashback, Banner made Barton promise to kill him if he ever becomes a menace again. This is a great character moment for Banner as he takes the ultimate responsibility for his actions and a tragic moment for Hawkeye, an Avenger that has always greatly valued human life.

But comics, particularly mainstream event comics, has me so burnt out on the idea of death, I can’t get swept up in the moment. Every major event has a major death of a major character, yet, usually, two events later, there’s the dead hero, leading the charge against the next menace. Marvel promises this death wills stick- but Marvel always promises this. Bendis promises this death is for good- but the writer has to say this, (in fairness to Bendis, Professor X is still dead, so I guess there’s precedence here) and these characters always come back.

Bendis crafted a very good comic fraught with emotion and Marquez rendered and paced that action to the maximum emotional impact. Sadly, Bendis and Marvel’s well-handled, intense story has been rendered somewhat impotent by an over reliance on past stunt-storytelling and abuse of tropes.

Is this a good comic? While you’re reading it, yes, yes it is. Will it remain a good comic? That depends on where Marvel goes next with Banner and Barton. In a year, this comic could be a well-executed turning point or an easily dismissed sales gimmick.

For now let’s call it 3 stars.