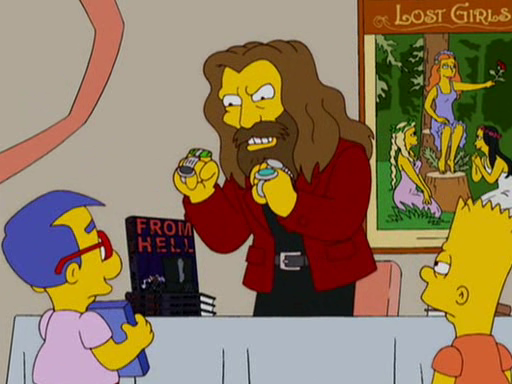 Alan Moore. The name is synonymous with creativity, Watchmen, V for Vendetta, League of Extraordinary Gentlemen, and fictional snake gods. Alan Moore is a rather unmoving and stoic figure in the comic book world. He lambasted movies based on his own work like Watchmen. He breathed new life into Batman with The Killing Joke. He’s taken public domain characters and…um…well, you probably just want to look that up! Either way, Alan Moore does not sway from his creative vision and has clashed with publishers numerous times.

Now, it seems that the legendary creator is going to retire once again from comics. Some might ask what Alan Moore will do. Will he completely retire? Try out another creative venue? Start a supergroup rock band with Joaquin Phoenix? Will he fully flesh out his faux-religion in order to gain tax exempt status? It seems that he’ll finish up his current comic book projects and then branch out into other expressive avenues!

Speaking on his final comic book projects, Alan Moore said, “And those will probably be very enjoyable. There are a couple of issues of an Avatar [Press] book that I am doing at the moment, part of the HP Lovecraft work I’ve been working on recently. Me and Kevin will be finishing Cinema Purgatorio and we’ve got about one more book, a final book of League of Extraordinary Gentlemen to complete. After that, although I may do the odd little comics piece at some point in the future, I am pretty much done with comics.”

He continued, “I think I have done enough for comics. I’ve done all that I can. I think if I were to continue to work in comics, inevitably the ideas would suffer, inevitably you’d start to see me retread old ground and I think both you and I probably deserve something better than that.” I believe an episode of the Simpsons covered this ground before, right?

“So, the things that interest me at the moment are the things I don’t know if I can do, like films, where I haven’t got a clue what I am doing, or giant literary novels,” Alan Moore added. “Things I wasn’t sure I’d even have the stamina to finish … I know I am able to do anything anyone is capable of doing in the comic book medium. I don’t need to prove anything to myself or anyone else. Whereas these other fields are much more exciting to me. I will always revere comics as a medium. It is a wonderful medium.”

So there you have it! At least on the bright side of things we might still be able to see what absolute madness goes on in Alan Moore’s head. What would a movie look like by him? Or a full-fledged novel? Guess we’ll have to wait around and see, and hopefully Alan Moore’s snake god blesses him with creative celerity.