Home COMICS Who Is the Curious Mister Oz, Keeper of the DC REBIRTH Mystery?... 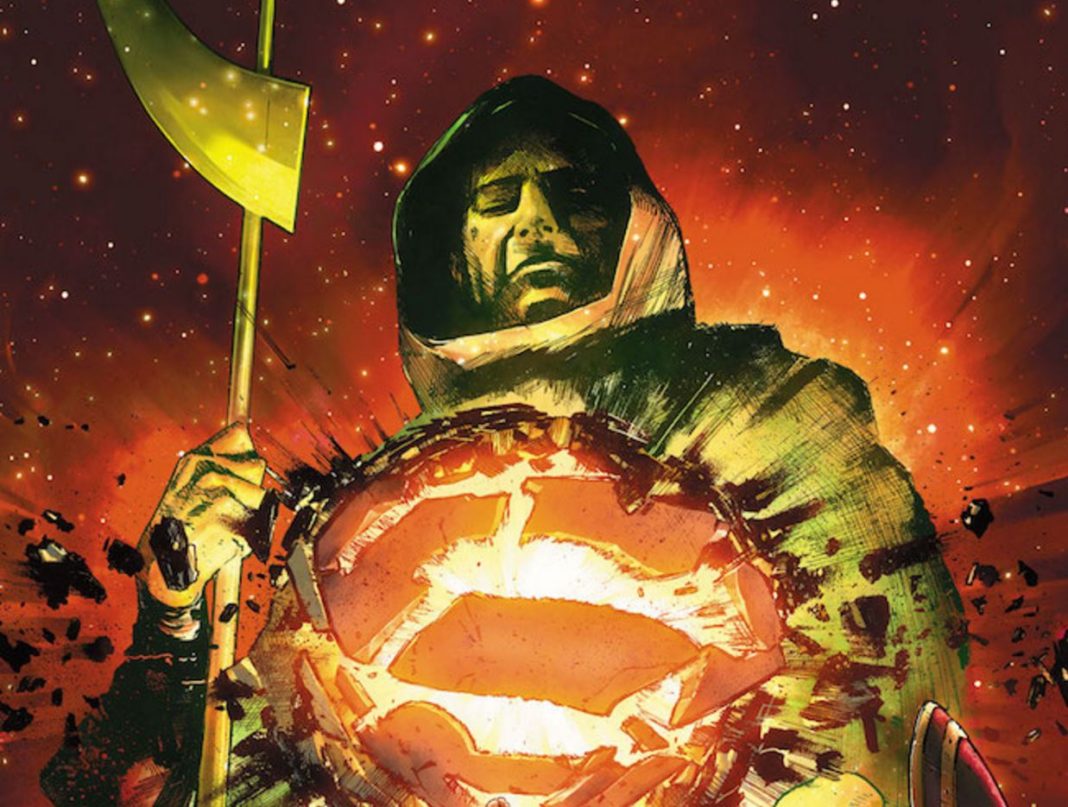 For a while now, the mysterious Mr. Oz has been hiding in the shadows of the DC Universe. At first, it seemed like he was only fixated on Superman, but over time he extended his focus, kidnapping figures from the “main” DC universe and placing them in a mysterious prison for a currently unknown purpose. This, of course, leads us to our biggest concern: who is Mr. Oz? We have very few clues, and we’ve never actually seen his face. However, I think I’ve got a list of possible suspects that could be operating under the assumed name of “Mr. Oz.”

So, one of the few things we know about Mr. Oz is his fascination with Superman. In fact, during his first appearance in the Men of Tomorrow story arc, he mentions he was important to Superman’s early years. So, knowing that, I’m wondering if Mr. Oz is secretly Lex Luthor from the pre-New 52 Universe. It would explain why he concentrates on the Man of Steel and why he claims to be setting him on a path.

There’s also the fact that pre-New 52 Superman was able to escape the collapse of Convergence, so it’s also possible that Lex Luthor managed to escape as well. Perhaps after escaping, he discovers the truth behind the Rebirth mystery and decides to gather heroes to fight the perpetrator!

Does this theory have some holes? Yeah, I’d say a few: how did he put together his base? How did he get those weird powers? Still, the apparent importance Mr. Oz’s position seems like it’d be a dream come true for Lex! Could I be wrong? Of course, but it’s still possible that Pre- New 52 Lex has been pulling the strings the whole time!

A right-hand man to Darkseid, DeSaad is an ingenious inventor with advanced technology from Apokolips at his fingertips. Considering Oz wears a similar cloak and surrounds himself with incredibly advanced, alien technology, there could be a connection. Is it possible that he could be Mr. Oz?

Well, it’s possible DeSaad could’ve taken notice of Metron’s disappearance after Darkseid War. Without a master to follow, he could’ve looked into the disappearance and, using his technology, hide himself from the culprit! It could also give some answer as to why he’s fixated on Superman; DeSaad was very interested in grooming him as his secret weapon! Could DeSaad be the one behind the cloak? It would certainly explain where he’s been at for so long!

Here’s the thing: Brainiac’s been missing since the end of Convergence. But we do know that the universe where he deposited bottled cities has collapsed. Could it be that he survived and was left to wander the multiverse again?

Well, considering how powerful Brainiac was during that story, it is possible he could’ve survived the collapse. But let’s take that one step further, shall we? What if, while in between universes, he discovered a being that was meddling in his original universe? What if Brainiac decided that defeating this being would grant him more power and allow him to advance his studies?

Perhaps using the power he had left, he created a base of operations where this being couldn’t find him, using it as a staging ground for his eventual counter attack!

There’s a multitude of reasons why Mr. Oz could be Brainiac, and it would certainly explain some things. If there’s a being in the DC Universe who thinks he could outsmart an all-powerful entity, it would be Brainiac! However, that’s only if we’re looking at this specific universe!

It’s time we address the elephant in the room and talk about the most popular theory out there. Since the beginning of Rebirth, an all-powerful figure has loomed over the DC Universe. Many believe this figure is Doctor Manhattan from Watchmen and there are significant clues that seem to point to that! So, if Doctor Manhattan could travel all that way to the DC Universe, who’s to say Ozymandias couldn’t?

As the smartest man on his world, it’s possible he found a way to follow Manhattan to where he went! Maybe after seeing what his old ally had done, he decided to hide himself and stop Doctor Manhattan’s mad experiment! It’s possible he decided to go under a new name and start kidnapping characters to recruit for a counter attack! It would explain why he chose the name “Mr. Oz” (maybe a little obvious, but it works for him)!

And let’s not forget that Ozymandias outsmarted Doctor Manhattan in the past. Out of all the possible theories behind Oz’s identity, this one seems to hold the most water. Well, unless you decide to look at it from a different perspective.

It seems like most fans back the theory that Doctor Manhattan is behind everything and Ozymandias is Mr. Oz! That’s all well and good, but in the spirit of looking at all the possibilities, I’m going to ask this: what if we’ve been looking at this from the wrong angle? In other words, what if the roles these two are playing are actually flipped? Call me crazy, but what if Ozymandias is the real mastermind and Doctor Manhattan is Mr. Oz?!

So, using our original Doctor Manhattan theory, plus our small theory from the earlier entry, let’s think about this. Let’s say that at the end of Watchmen, Doctor Manhattan travels through the multiverse. Eventually, he either finds or creates the DC Universe and then starts to manipulate certain events.

After time passes, his old friend Ozymandias manages to track down Manhattan and finds out what he’s been up to. Maybe Ozymandias uses some sort of device (like the one he used to disintegrate him before) to strip Manhattan of his powers and take them for himself! Using that power, he begins to tinker with the universe that Doctor Manhattan was so fascinated with. From there, we could theorize that Doctor Manhattan, in a weakened state, creates a space to hide from Ozymandias. Wanting to take back what he lost, he becomes Mr. Oz and starts plotting his revenge!

This could also explain why he knows Superman so well; he may have influenced aspects of his history! Now, it seems he wants to use him and many others to fight his former ally.

How true can this be? Well, it’s only a theory, but the one behind the Rebirth mystery may not be the one we thought! It’s possible that there’s a deeper layer to this conspiracy that we haven’t considered. Either way, the answers to the Rebirth mystery could all hinge on the identity of Mr. Oz!

So, are there any other characters that could be assuming the identity of the curious Mr. Oz? Let me know in the comments below!