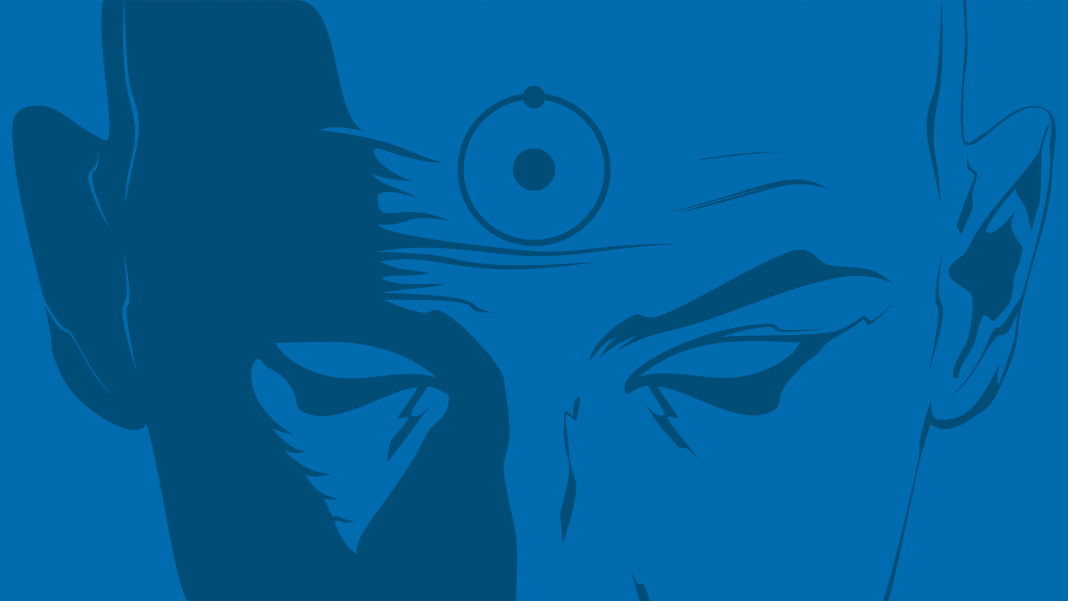 The rebirth is upon us! With the release of DC Universe: Rebirth #1, secrets were revealed regarding the reality our favorite superheroes inhabit. The most notable is that these mysteries seem to be linked to Doctor Manhattan from the critically acclaimed comic, Watchmen (great book, by the way, and I can’t recommend it enough). It’s a very interesting revelation, since Watchmen’s characters have always remained separate from the rest of DC. While waiting to discover the depths of Manhattan’s involvement, DC fans have been exploring various avenues of speculation, but the following idea/query tends to be more popular among DC REBIRTH readers: did Doctor Manhattan create the DC Universe? Definitely a crazy theory…but not impossible! So, let’s follow the clues as we try to crack this comic book conspiracy!

[SPOILERS for Rebirth #1, Justice League #50, and Watchmen below!]

So what do we know so far?

In Rebirth #1 we learn from Wally West that something (or maybe someone) removed an entire decade of DC’s history. People were missing, marriages and friendships were erased, and legacies became nonexistent. The prime suspect of this is Doctor Manhattan who apparently altered the fabric of the universe during Flashpoint – when Barry Allen tried to fix the timeline – in order to weaken our heroes. At the time of this article, the reason for this is not yet clear, but perhaps there’s more to it than just taking out a chunk of time. After all, he seems very protective of this secret, which brings us to the next detail.

While we haven’t seen hide nor glowing head of Doctor Manhattan, there are clearly signs that the Watchmen’s universe is involved somehow. Doctor Manhattan may have been a little busier than you think. Doing what, you may ask? Well, he’s making sure those who learn the truth of the universe never live to tell the tale!! An example of this can be found at the end of Justice League #50 when Owlman, using the all-knowing Mobius Chair, tries to learn the many secrets of the universe. Suddenly, someone finds both him and Metron and in an instant they’re turned to ash.

Similarly in Rebirth #1 we see Pandora being chased down by a mystery assailant, and as she yells at whomever it is, stating “there was hope,” she is vaporized. Now some of you may have already noticed an interesting little detail in the way these two were killed; it’s nearly identical to the way Doctor Manhattan killed Rorschach towards the end of Watchmen!

In a way, even the circumstances were similar. In Watchmen, Rorschach was ready to reveal the truth about the devastating means used to bring about world peace, but Doctor Manhattan (who saw the end justifying the means) killed him to preserve that peace. If we’re right to assume Doctor Manhattan is behind this, that means he killed both Owlman and Pandora – the only two people who truly knew who he was and what he did – to keep it secret!

As is the case with all realities, the creation of the DC Universe is shrouded in mystery. What we do know is that the few times DC heroes and villains have seen the beginning of everything, it has always been depicted as a giant hand floating in the middle of nothingness, holding what we can assume is everything that is, was, and will be.

Now, this can mean many things (the hand could be the mortal mind attempting to comprehend the “Creation Event,” or something else entirely), but most of the time we see this hand hidden in shadow, making it hard to tell just who or what the hand belongs to. Well, that was certainly the case, until Krona witnessed it (above)! This time the hand isn’t as hidden; it’s blue, and looks like the appendage of a certain blue doctor we’ve seen before. Maybe I’m wrong, but it seems like too much of a coincidence. And we’ve seen the “good” doctor create things out of nothing due to his ability to manipulate the building blocks of matter. So, it stands to reason that this “hand of creation” could very well be the manipulating digits of Doctor Manhattan!

At the end of Watchmen, Doctor Manhattan speaks with Ozymandias, stating that he intends to leave the galaxy they know in favor of another one, and that he intends to “create” some life there. Now that’s an interesting comment right there. It means Doctor Manhattan can’t just create matter out of nothing, he can also create life out of nothing, too! Perhaps he did just go to another galaxy to do this at first, but let’s remember that Doctor Manhattan seems to get more powerful with every passing moment and, as a result, seems to always outgrow – or become bored with – the space he inhabits. It’s not completely outside the realm of possibility that he became bored with his universe, found a way through the dimensional barrier to the DC Universe, and began working on it. Heck, he probably decided to add characters to this universe similar to those he knew from his home dimension, like The Question, Blue Beetle, and Captain Atom. In a way, you could say that the DC Universe is the reality he never got to live.

5. What Could All of This Mean?

If we look at all the clues, I think we can theorize that Doctor Manhattan, becoming tired of is own universe, crosses over to another dimension. He then uses his powers to create an entirely new universe, teeming with all different forms of life. His creations eventually learn of this and he silences them to keep the truth buried. But why did he do that, and why remove a decade from that universe’s timeline? Well, given his apathy and general lack of empathy, everything the big blue doctor does seems to be an experiment. Theoretically, that could make the DC Universe nothing more than a testing ground of ideas to see what kinds of reactions would occur. Ordinary people getting powers by sheer accident, visitors from far off planets, and even taking away chunks of history could be methods employed to determine how Manhattan’s human lab rats would adjust to significant change.

But this is all just a theory so far; whether or not Doctor Manhattan really created the DC Universe from scratch (or alternatively, that he just influenced events that created heroes, villains, and etc. for the same pursuit of knowledge, thereby creating the DC Universe as we know it) is not yet clear. From what we know, we, the readers, can start to put the pieces of the puzzle together that DC has laid out for us. So, until then, ask yourself one question: who watches the Watchmen? Wally West?

Did you like my theory? Do you think that Doctor Manhattan created the DC Universe? Let me know below!