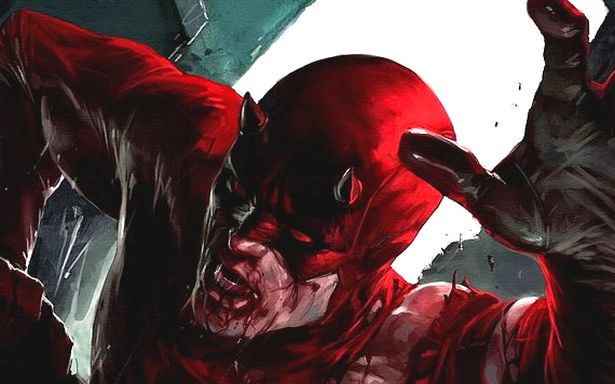 Have you been watching Daredevil Season 2? I’ve been watching Daredevil Season 2. Would you like to know what’s great about Daredevil Season 2? Everything! What’s especially great about it, besides everything, is the incredibly intense, beautifully choreographed fight scenes; there’s a blissful fluidity between combatants as they punch, parry, spin-kick and twist like pummeling windmills until faces are puffy and polished with chunky, molar-filled blood! Ahem. Anyway, yes, it gets little messy. Case in point: Daredevil is a bloody mess in these new Daredevil Season 2 posters. Yes, this set of 4 amazing images also features Elektra and the Punisher, but they’re not nearly as bloody, and therefore not nearly as interesting. OBSERVE!

In the few episodes I’ve seen, Daredevil cracked at least two crazy little smiles: one after beating the hell out of someone, and then another after receiving a beating. Obviously, hyper-violence is Matt’s drug of choice.

Honestly, I haven’t gotten far enough into season 2 to experience the introduction of Elektra, but from all the promotional footage I’ve witnessed, she does her comic book counterpart proud; she’s a female force of nature, and female forces of nature are usually a hell of a lot more dangerous. They’re certainly more fun to make out with, but definitely more dangerous.

Now, I’ve seen Jon Bernthal’s Punisher, but only a taste; I’m only at the beginning of episode 3. Anyway, he hasn’t said very much, but his presence speaks volumes. Bernthal is absolutely sharing headspace with Marvel’s vengeful sociopath, and his focus and surgical brutality glisten, reside and manifest in the cold, permeable stare of a natural, dogged predator.

And here’s another shot of Daredevil; he seems a little less bloody (and not nearly as happy). It also appears as if he’s outlined in gunshots; this is obviously a promotional image, because the Punisher never misses. If he does, it’s never more than once and always less than the 553 times shown above.

Oh, and Daredevil Season 2 is playing right now, by the way.

Starring Daredevil/Matt Murdock, Foggy Nelson, Karen Page, Frank Castle/The Punisher, Elektra, Stick, maybe Kingpin, possibly Stilt-Man (but I really doubt it ), 7000 members of the Hand (or 10,000, depending on how motivated they are) and Typhoid Mary (no, but that would be AWESOME!).