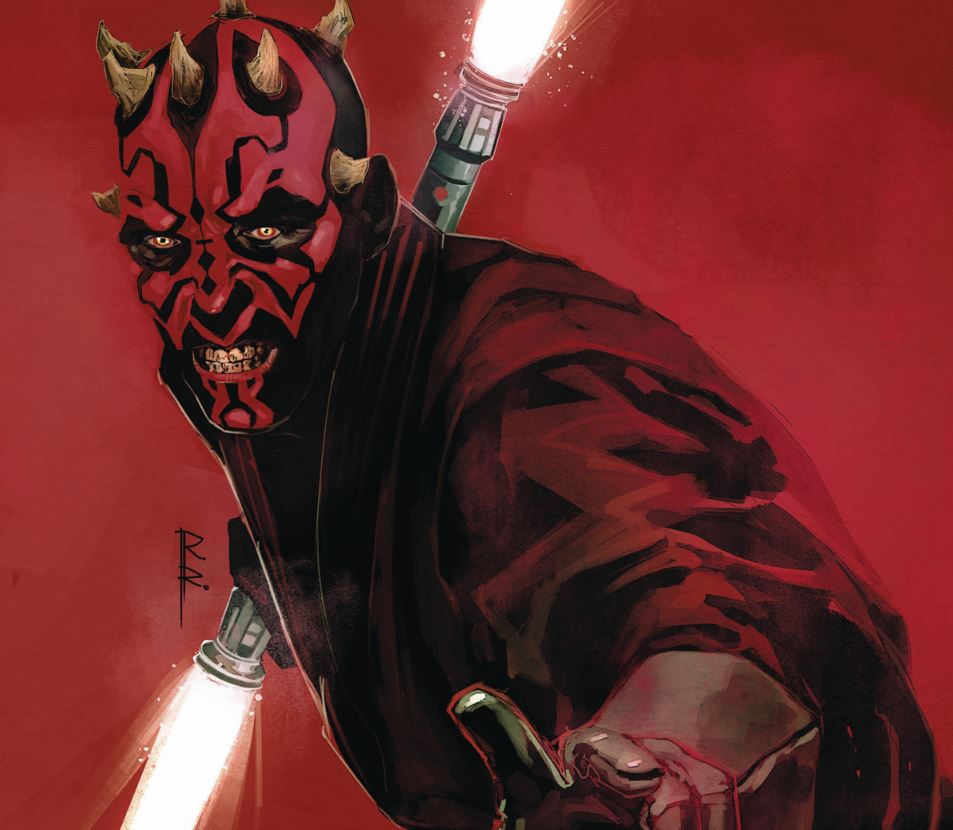 Gang, our Darth Maul #1 review is a little SPOILER-Y, so…check back with us after you’ve read the issue. Oh? Still here? Thank you!

It’s been awhile since fans of Star Wars have gotten to journey back to the prequel era. Ever since Disney took over the galaxy far, far away, the much-maligned era of the prequels has been left basically unexplored. But, it seems like there is one character that is just too beloved to stay quiet for long, the ultimate Star Wars badass, Darth Maul.

As far as the action oriented side of the character, the coolness of Maul is on full display in Star Wars: Darth Maul #1. The issue opens with Maul fighting Rathtars (hey, way to connect the prequels with The Force Awakens), moves on to Maul fighting space pirates, until it finally leads to Maul discovering a hidden Jedi padawan and beginning the hunt for a kidnapped, young Jedi apprentice.

Writer Cullen Bunn’s tale is thematically connected as it explores Darth Maul’s restlessness and simmering anger at the universe. However, the plot of the issue is choppy and disjointed as Maul jumps from one mini adventure to the next as “Darth Maul” becomes “Darth Decompressed.” Bunn writes Maul like an angry Goth teenager, defiant and a little annoying. Bunn really nails the action portions of this debut issue, but his characterization and plotting are scattershot and oft-times redundant.

Maybe this is all because there was never too much character to explore in Darth Maul. In The Phantom Menace, Maul shows up, scowls and fights. That’s pretty much all he does this issue, accompanied by overwritten, first person narrative captions that try to delve deeper into Maul’s motivations, but sound like the ramblings of a pissed off teenager.

The book is set right before The Phantom Menace, and Bunn gives readers a fascinating peak into the state of the galaxy from that era, so at least the writer nails the setting.

And it would be a shame not to mention the gorgeous Luke Ross art. Ross’s Maul is a site to behold. It’s like the veteran artist had Ray Park in his studio to model the awesome action sequences in Star Wars: Darth Maul #1.

The issue ends with an absolutely delightful little backup tale written and drawn by Chris Eliopoulos that features one of those little probe droids Maul lets loose on Tatooine during The Phantom Menace. Eliopoulos does more in these brief few pages with a non-verbal little droid than Bunn does in his main feature with one of the galaxy’s most fascinating villains.

Star Wars: Darth Maul #1 may give Lucasfilm and Marvel awesome Darth Maul marketing art for the next two decades, but it did not give fans a story with any substance as of yet.