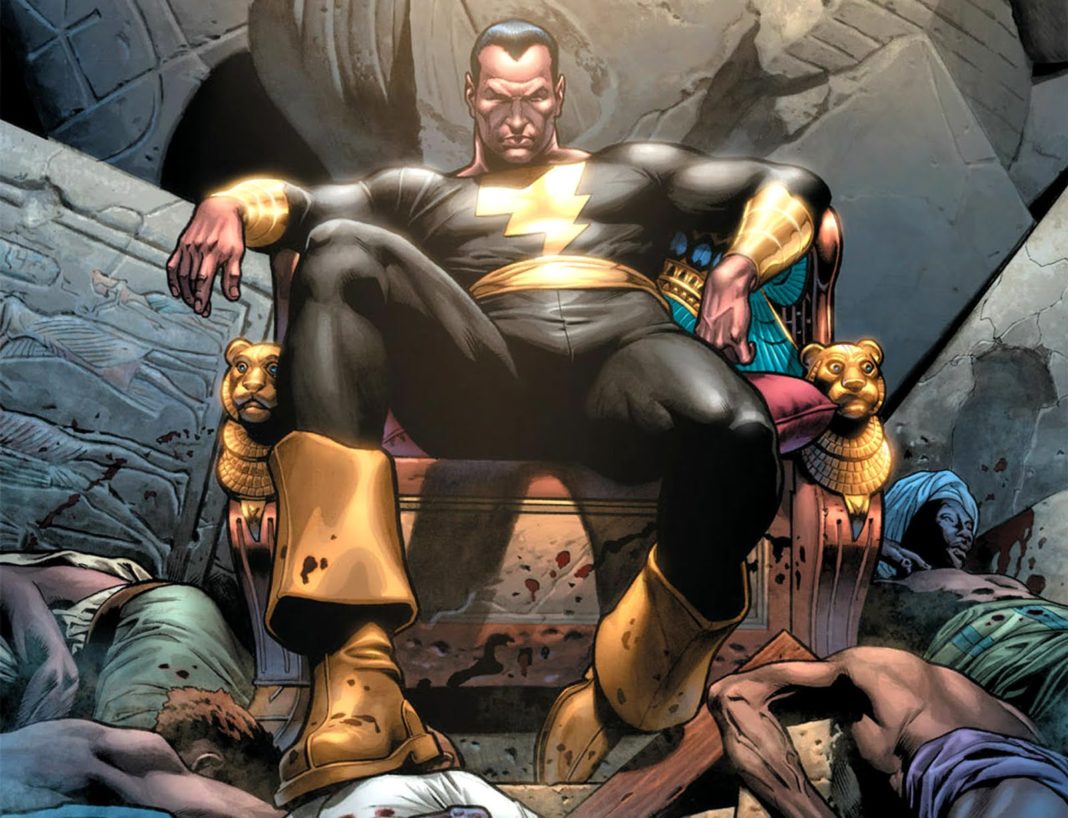 With the recent, devastating news that Ben Affleck is stepping down from directing the solo Batman film, fans are wondering who will be worthy enough to take the Bat-mantle. The DC Cinematic Universe has been setting itself ablaze with failed box office statistics and an unending litany of complaints, and after the smoke clears, we’re wondering who’ll be left to pick up the pieces.

Perhaps casting a charismatic actor to play a lesser-known character is just the kind of revitalization that DC needs. And much like Marvel did with RDJ’s Iron Man, maybe Dwayne “The Rock” Johnson’s Black Adam can provide said revitalization. But before you get all excited about The Rock’s Black Adam movie, and his forthcoming appearance as the titular hero’s opposite number in SHAZAM, here’s your chance to catch up on what makes the anti-hero demigod as cool as can be.

The comic book world is no stranger to countless reboots, and Black Adam was certainly not spared, either. Originally created by Fawcett Comics, Teth Adam was supposedly an ordinary dude who, because of his good heart, got chosen by the wizard Shazam to spread good deeds and stuff with his newly acquired superpowers. Of course, because the dark side has cookies and is therefore more enticing, Black Adam doled out dastardly deeds instead, prompting the wizard to banish him. Captain Marvel, a.k.a. Shazam, took his place.

Eventually, Geoff Johns and David Goyer took the reins, and in the New 52, Teth Adam started out as a slave in Kahndaq who experienced the tragic murder of his family. His kind-hearted nephew Aman saved his life, and, impressed by his sacrifice, the wizard Shazam granted Aman powers in the Rock of Eternity. But that wouldn’t make for an interesting story now, would it? So, of course, Teth Adam straight-up murdered his nephew and took the power for himself, vowing revenge on the world.

Just like Captain Marvel, Black Adam was jacked up with super-powers by simply uttering the word “SHAZAM!” However, instead of invoking the wizard’s powers, this invoked the abilities of Egyptian gods:

‘S’ is for Shu that grants Black Adam endurance and insane survival skills.

‘A’ is for Amon, granting Black Adam one of the most influential powers in the DC universe.

‘Z’ provides him with the wisdom of Zehuti (hypnosis and multilingualism included).

‘A’ is for Aton, allowing Black Adam to wield thunderbolts and go dimension-hopping.

‘M’ is for Mehen, which grants Adam courage, strength, and accelerated healing. So basically, Black Adam is ultimate destruction walking on two feet.

Despite his terrifying demeanor, Black Adam actually had some moments in the comics when he wasn’t quite so evil. Reinvented as an anti-hero in these modern times, he once humbly joined the Justice Society of America, partnering up with the superhero team to bring down the baddies from the Injustice Society.

He was also once employed by Amanda Waller for Task Force X, which might be a possible opening for crossing the Suicide Squad over with Black Adam’s movie. He even had some semblance of a conscience when he wanted to make amends for past mistakes by making peace with superheroes in JSA: Black Reign (even though the series ended with him manipulating the JSA for a hostile takeover of Kahndaq).

In the New 52, evil Superman clone Ultraman tried to shield the sun with an eclipse, so of course, Black Adam (teamed up with his BFF Sinestro) effing moved the moon back in place to defeat the big bad guy, effectively disabling the Crime Syndicate. No big deal.

So yes, Teth Adam had some good times, but he is still technically a villain—in fact, he puts the “super” in “super-villain”. Black Adam is a psychotic mass murderer who assassinated millions of people in Bialya in his insane quest for revenge for the death of his wife, Isis. In doing so, he effectively sparked World War III in the comics, going up against all the world’s superheroes combined. What a man wouldn’t do for love, eh?

Aside from his epic bouts with the Man of Steel, Black Adam also oh-so-joyfully reduced the Martian Manhunter into a sniveling mess when he forced him to see into the violence of his messed-up mind. “Take it. Every man, woman, and child. The memory of all those I’ve killed today,” he says. Anyone who claims that “I swim in an ocean of blood and do not drown beneath the waves” is definitely certifiable.

Which brings us to the whole point of this little fact-finding mission—the Black Adam movie starring The Rock. With the slogan “kneel at his feet or get crushed by his boot”, the walking contradiction that is Black Adam is indeed a complicated character with loads of potential, and with Dwayne Johnson playing him, there just might be some hope left for the DCEU.

“What made me choose Black Adam? I just felt Black Adam was inherently more interesting to me because I felt there were more layers to Black Adam, starting out as a slave and then ultimately becoming the anti-hero who we enjoy today,” says The Rock.

The movie is supposedly scheduled for release on April 5, 2019, so there’s plenty of time for you to air out your best bets on the movie. Let the juicy speculations begin!