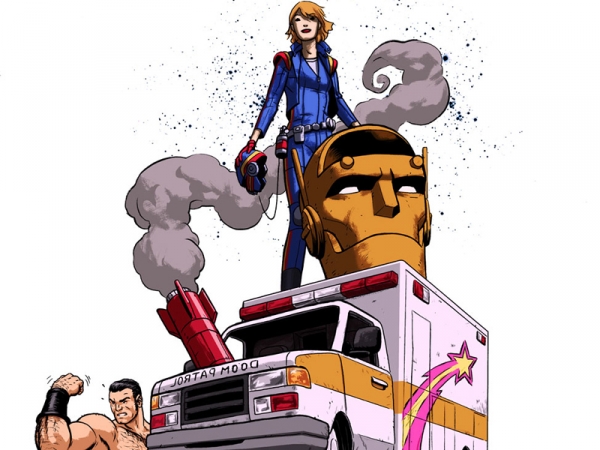 Way introduced this new endeavor and his involvement, stating, “DC is letting me have an imprint called Young Animal. The first book is Doom Patrol.”

Way will be writing the book with art by Nick Derington. “It’s really weird,” Way continued. “The book will not only pay tribute to Grant Morrison’s seminal run on the series, but the entire history of the team.”

“This September, in the spirit of Grant Morrison’s legendary run on the series, along with other classic incarnations of the characters, writer Gerard Way and artist Nick Derington will put their unique stamp on the world’s strangest heroes taking on the universe’s strangest villains.”

A Grant Morrison-flavored Doom Patrol? Count me IN! And…FINALLY!

What else is spilling forth from this heated, boiling spring gushing subversive, comic book goodness?

From writer Cecil Castellucci and artist Marley Zarcone, with covers by Becky Cloonan, Way describes the book thusly: “It’s another alien, a woman alien, who’s hiding in the body of a teenage girl that used to be a bully. She has the Madness Vest. The Madness is kind of taking over.”

“An alien takes over the body of a 16-year-old bully and must face the challenges of being a stranger in a foreign land, plus the consequences of a life she didn’t live. Star Wars’ Moving Target writer Cecil Castellucci and artist Marley Zarcone explore themes of madness, alienation, and the bizarre in this sci-fi thriller, with covers by Becky Cloonan. The new series hits shelves in October.”

CAVE CARSON HAS A CYBERNETIC EYE!

Written by Way and Jon Rivera, with art by Michael Avon Oeming. Way assured us the comic will definitely explain why this classic, spelunking DC character has a cybernetic eye.

“Writers Gerard Way and Jon Rivera, along with artist Michael Avon Oeming take readers on a strange adventure with DC Comics’ Silver Age character Cave Carson, his cybernetic eye and his college–age daughter as they travel to dark places deep in the earth and mind. Catch this new series in October.”

Written by Jody Houser with art and covers by Tommy Lee Edwards, and John Paul Leon on interiors. Way elaborated on the series, stating, “This one is set in Gotham.” He also stated that the book will introduce a new character. Jim Lee added that it will be a mature readers title.

“Meet Violet Paige, a celebrity heiress by day and brutal vigilante by night as she takes on the underbelly of Gotham City’s high society. Hitting shelves in November, the series is written by Gerard Way and Jody Houser with art by Tommy Lee Edwards.”

So, ready for the new Young Animal imprint? And….what about Vertigo?