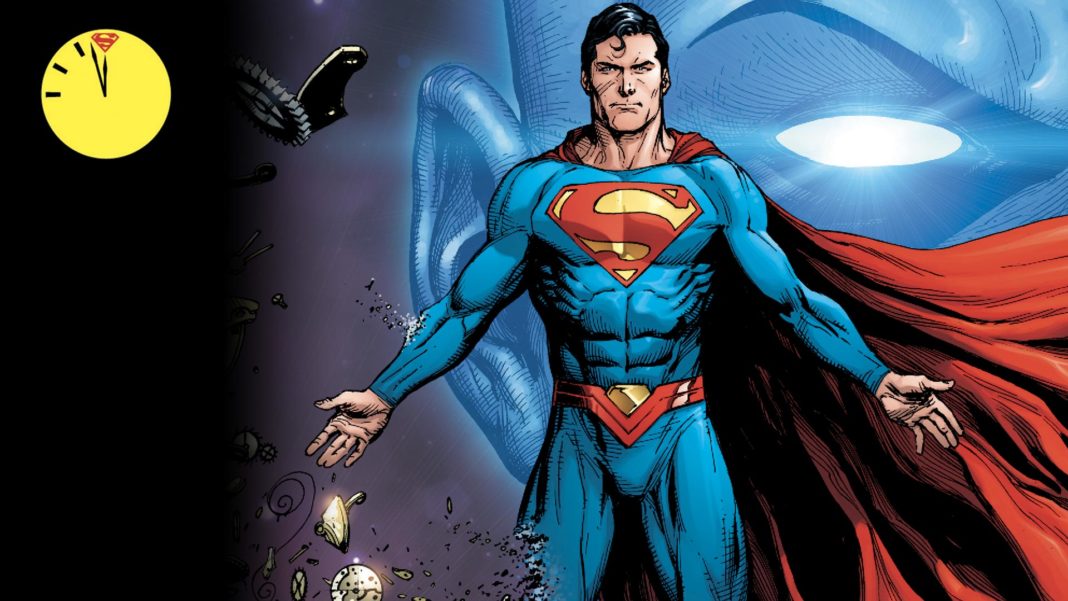 The comic event of the year finally hit the comic shelves as DC Comics released the first issue of Doomsday Clock! The world of Watchmen and the DC Universe collide!

Did the story get off to a great start or is it a few seconds short of a minute? Read and find out! Fair warning, though — spoilers are forthcoming.

Doomsday Clock has been in the works for a while. Last year, DC got the ball rolling with the one-shot DC Universe Rebirth.

Throughout the book, we receive hints that it wasn’t the Flash who caused the universe to reset itself in the New 52 era of DC in Flashpoint, but rather Dr. Manhattan.

At the very end, Batman discovers a surprisingly familiar clue in the Batcave — an object alluding to an unseen force lurking somewhere (or ‘somewhen?’) in the multiverse.

The Flash and Batman also had a crossover event earlier this year: “The Button.” The world’s greatest detective and the scarlet speedster try to discover the origin of the mysterious button. To those of us in the know, we’re quite familiar with the Comedian’s favorite ironic accessory.

So, the new dynamic duo gets a few clues, but wind up asking themselves more questions.

Doomsday Clock opens with a montage of what happened in the world of the Watchmen since the final issue in 1986. Ozymandias’s master plan of manipulating the USSR and the US to world peace through the staged alien invasion has been revealed. Now, everybody on the planet is looking for him. He also has brain cancer, so his time is limited.

Meanwhile, a new Rorschach frees a few inmates from prison — a husband and wife criminal duo by the names of Mime and Marionette. The masked vigilante promises to reunite them with their child if they do one last job with his boss, Ozymandias. Their task: locate Dr. Manhattan, who vanished at the end of Alan Moore’s and Dave Gibbons’ mini-series.

The issue ends with Clark Kent having a nightmare about his parents dying in a car crash.

Johns paces the story well and there is never a dull moment. I liked how Johns didn’t cop out and utilize the original Rorschach — retconning his death would have negated the impact of the final issue of Watchmen.

The artwork by Gary Frank (Action Comics) is the true star of the book. I love how the book is laid out exactly like the original Watchmen books, with nine panels per page.

The artwork is colored very much like the original work, successfully recreating the visual tone of the Moore/Gibbons masterpiece.

You should definitely get this book. DC has been on a roll the past year and this book looks to keep the momentum going. Seems like DC has a plan with this story and it isn’t being forced upon us due to the popularity of the Watchmen characters. I honestly can’t wait for the second issue.