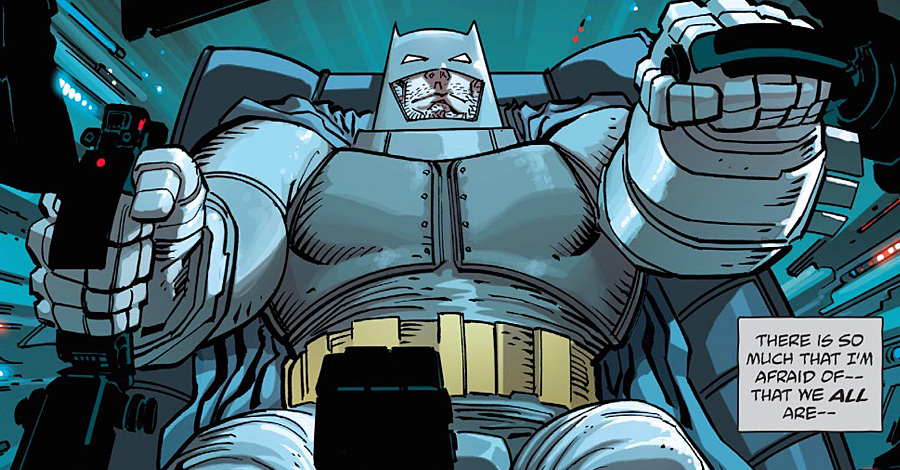 Warning: There are mild spoilers ahead regarding DK III: The Master Race Book 5

The Man of Steel has fallen. Encased in weaponized black matter by Quar, Superman and his iconic Fortress of Solitude were thrust into the depths of the Arctic Ocean. Now, the cultist Kryptonian has turned his maniacal gaze to Gotham. Quar and his followers hang like the guillotine over the city waiting to surgically sever its proverbial head from the body. His ultimatum: hand over the vigilante known as Batman, or perish. With the entire city converted into a pitchfork-wielding mob, the daring Dark Knight detective begins to implement his grand scheme. Here is The Source’s DK III: The Master Race Book 5 Review.

“It’s hard to describe, because what we know as mass and space doesn’t apply.”

Gotham is tearing itself to shreds in search for Batman. Amidst the chaos, Batman and Batgirl begin enacting two crucial parts of Bruce’s master plan. Carrie Kelly rescues Superman from his dark matter prison with Aquaman’s aid. Although the specifics of his salvation are difficult to express, Superman is quickly freed with the use of Batgirl’s deus-ex-tuning fork. Meanwhile, Batman rescues the Flash and recruits his assistance for the ensuing storm.

Where does he get all of these wonderful toys?

Quar revels in Gotham’s destruction. The crazed Kryptonian praises the rabid residents on their worth as worshippers. Batman seeks to disrupt Quar’s plan with the use of the Bat-tank as well as the Flash helming a weather manipulator that is housed in the bat-signal. The ignited bat-signal induces a kryptonite rainstorm, causing the weakened Kryptonians to plummet to the earth. Batman intends to utilize the pitchfork-wielding mob as a weapon against Quar’s army. Although severely weakened, Quar quickly gains the advantage against the aging Dark Knight. Before Quar can land the final blow, Superman enters the battlefield, clad in kryptonite-resistant armor.

“It’s like watching an animal chew its leg off to get free of a trap. I mean, if successful, it then stumbles and dies. What drives it to do such a thing?”

Although a comic book’s plot is important, it is the theme that allows it to resonate with the audience. The theme of the grizzled veteran coming out of retirement to accomplish one last mission is certainly part of what allowed The Dark Knight Returns to garner such a fan base. The narrative in DK III: The Master Race Book Five is fairly simple when comparing it to the works of other writers. However, Frank Miller and Brian Azzarello’s narrative is at its best when commenting regarding the state of our modern society. In light of recent tragedies, Miller and Azzarello’s chaotic Gotham does not seem to be that far of a stretch when compared to the real world. Lines such as this help drive home the authors’ commentary.

“Fear is what I dream about.”

Moreover, Miller and Azzarello’s brief commentary regarding fear and the Batman help to provide more insight into the ethics of this Dark Knight. As with other incarnations of The Dark Knight, fear is a driving force behind Miller and Azzarello’s Batman. In this instance, the authors are answering their own question, implying that the trapped animal chews its leg off out of fear. Essentially, the authors are saying that fear is the ultimate motivator. It can help us survive the direst circumstances. Without possessing some amount fear, or through overconfidence, we are ultimately doomed to fail.

“But the ‘tuning’ will only happen if he wants to get the fork out of there.”

The largest gripe that I have with the plot of this issue is Superman’s speedy salvation. Considering that there are three issues left to this series, it is hard to imagine which direction the plot will progress. However, the arrival of “ultimate deus-ex-machina,” also known as Superman, seems to alleviate any dramatic tension that could have been cultivated with his absence. In the end, I wasn’t fearful in regards to Gotham’s fate because Superman had already been freed from his black matter prison. Moreover, the tie-in issue offers little to the plot beyond illustrating Baal’s manipulative and destructive nature.

Ultimately, the DK III: The Master Race Book 5’s commentary regarding fear and the state of our society save the subpar plot. Superman’s quick return may decrease any tension regarding Gotham’s safety. However, this does increase my curiosity as to how the stakes will change regarding his involvement. What did you think of the issue? Did you find any themes that I may have missed? Sound off in the comment section below!