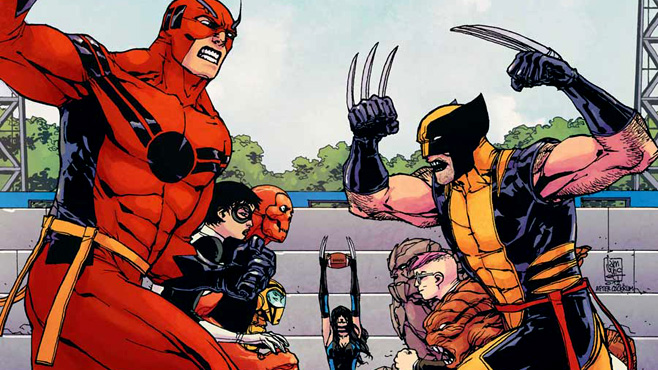 This Sunday is Super Bowl 50. The Denver Broncos and Carolina Panthers will heads out on the gridiron to crown a champion. The game has some amazing storylines, like the old gunslinger Peyton Manning riding into the sunset, and Super-Cam Newton looking to put his name in the history books. It kind of sounds like a blockbuster movie.

So that gets you thinking; what if the Super Bowl was a blockbuster? If we could create a team straight from the comics, how would it be constructed? Well get ready, because this is the draft. Not just any draft, though; it’s the draft for…

The game is simple: fill the position with the best option available. Now, you just can’t throw names out there just because, so I gave each pick an NFL Doppelganger for comparison (and don’t question all the New England Patriots guys. They are MY TEAM!). Understand? Well, you will. So with the first selection, let’s fill in the most important position: Quarterback!

When you look at a Quarterback, you’re looking at the leader of a group. When you need a leader who won’t stop fighting until the work is done, you think Captain America. Steve Rogers leads the Avengers by example. Sure, his character has been called into question and he had to fight to earn his reputation back, but in the end he prevails (most of the time). Kind of sounds similar to a certain New England-based Quarterback.

A solid football player needs to be able to run the ball. Who better to handle the rock, than an unstoppable force. Once The Juggernaut gets rolling… he’s not going down easy. You could say that he goes into “Beast Mode.” Well then… let’s compare him to Mr. Beast Mode himself. Need more persuasion? Take a look at Lynch’s run in the 2014 Wild Card game. He seems pretty super-human to me.

What makes a great Wide Receiver? Some will say speed, others leaping ability. Those people would be wrong; it’s all about the hands. Legends are made on the gridiron for being able to catch anything that comes their way. Wel,l take a look at Mr. Fantastic; he can reach above anyone on the field. Just try overthrowing him. It’s impossible! If you need someone to make a grab like OBJ, just throw some gear on Reed Richards. Will his skills translate from the lab to the field?  Who knows, but if there’s someone smart enough to figured it out, it’s Mr. Fantastic.

Tight Ends take more abuse on the field than any other position. They battle in the trenches, run routes, and take the hits as they fight their way into the end zone. Needless to say, they take a beating. So wouldn’t it be smart to bring someone on board who has the ability to regenerate? Think about it; with every snap, you’d have a freshly rejuvenated Wolverine ready to go. With speed and strength, he is the comic version of Rob Gronkowski. Also, much like Gronk, his ability to recover from injuries would be extremely impressive.

Now… lets head to the defensive side of the ball.

The strongest man on the team? A beast who can tear through the offensive line? Someone with the speed to run down a Quarterback? A defensive end needs to be a combination of strength and speed, which sounds like a job for The Hulk. Bruce Banner’s alter ego would strike fear into the heart of his opponents. If you think finding a real world example of Hulk would be hard, think again. Everything I just wrote about the Hulk fits Texan’s DE J.J. Watt perfectly. Maybe too perfectly (makes you wonder if Watt was exposed to Gamma Radiation?).

A linebacker is the Quarterback of the defense. He is the leader who needs to do whatever it takes to protect his team’s end zone. Well, if you need someone who can stand his ground and lead his team to victory, you turn to Superman. Faster than a speeding Running Back and more powerful than a roaring Tight End, Superman is just the Kryptonian you need leading the charge. As for the Panthers’ Luke Keuchley, he might as well wear the big “S” on his chest when Carolina takes on Denver in Super Bowl 50.

There is a lot of running around for the safety. They might start in one spot on the field, but by the time the ball is thrown they’ll have to run across the green in order to make a play. Eric Berry is the premier safety in the league and a hero in is own right. However, you’d think that if he had the speed The Flash possesses he’d be pulling in interceptions left and right. Barry Allen is the man you want in your secondary; a streak of red and gold. Just like the color Berry wears every Sunday.

To be a great cornerback, you need to embrace your dark side. You have to get inside your opponent’s head and psych him out. Once your opponent thinks they can’t beat you that is when you strike. The Joker is the perfect example of what a good cornerback should be… well, except for all the homicide (the NFL won’t tolerate that). Enter Richard Sherman. He not only plays mind games with Wide Receivers, he completely owns them by the end of most games. You can envision him whispering to most of his opponents, “Why so serious?”

Even as a Patriots fan I have to admit, the resemblance is uncanny.

Well, that’s the list I created. So let us know… who do you want on your blockbuster Super(hero) team?