Home COMICS Dropping a Title from Your Collection: The Internal Struggle 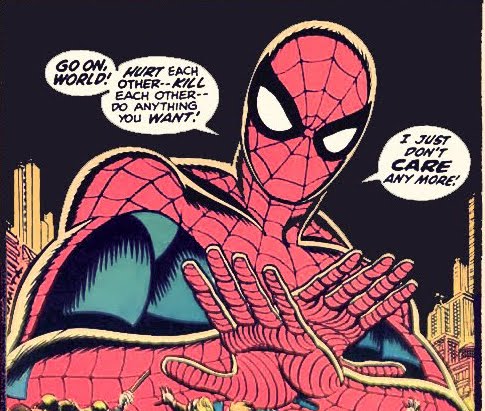 Comic fans know that keeping up a collection can be hard work. Backing boards, bags, and even the books themselves become costly, almost to the point of “expensive” depending on how many titles are in your pull list. However, there’s one struggle every fan needs to deal with:

When the collecting becomes too much, you might need to drop a title you’ve been collecting for a very long time.

Yes, I’m talking about dropping the book that’s been there for you through thick and thin.

You two went through a lot. I’ve been through it before with Ultimate Spider-Man, New Avengers, Batman and Daredevil. I am currently going through it now with Guardians of the Galaxy.

I’ve collected Guardians since the relaunch in 2013. The whole Brian Michael Bendis run was great and the stories were entertaining and always left me wanting more. The artwork by Steve McNiven and Valerio Schiti was on point. However, the current run by Gerry Duggan and Aaron Kuder just isn’t clicking with me. There seems to be something missing with the new creative team; it’s like the fun isn’t there, and the artwork by Kuder doesn’t fit the book in my opinion.

You just hate breaking up the collection. It takes time and money to build a long run of a certain title and, quite frankly, complete runs are quite the accomplishment in comic collecting.

You almost feel guilty, like you’re turning your back on a friend. But, you know it’s for the best.

I tried dropping Ultimate Spider-Man for a while after I got tired of it. It was after long-time artist Mark Bailey left.

The series’ new artist, Stuart Immonen, was fine, but he didn’t have that spark with writer Brian Michael Bendis. However, as soon as I was about to drop it from my pull list, How I Met Your Mother’s certified Graduation Goggles kicked in. I just couldn’t drop the book.

I thought, “What’s an extra $2.99 a month? Ehhh, won’t hurt to keep the collection going. So what if the book isn’t all that great now?”

Then I kept reading the book, hoping it would get better. It didn’t. The book went from being about the adventures of Spider-Man to being about him and his amazing friends Ice Man and Firestar. But much like a person stuck in a bad relationship, I eventually mustered up the strength, got the confidence I needed, and dropped the book.

My “Ah ha!” moment was when I was bagging and boarding the books. I took a look at myself and realized the collection didn’t run me, I ran the collection! Nowhere is there a doctrine stating that once you start a series, you must see it through.

I know I sound like a psychopath, but you do feel guilty when you drop a series you collected for a long time. It doesn’t feel natural leaving the comic store without that one series you bought for so long. You feel like you forgot something after you left.

After not buying it for a few times, I felt good not spending money on a book I no longer enjoyed. Now, I had more money to discover better books like The Incredible Hulk during its “World War Hulk” arc or Ed Brubaker’s Captain America run.

“Why spend money on a book you don’t enjoy? That’s not economically smart.”

Well, like I said, dropping a book you collected for a long time is easier said than done. Sure, if you eventually sell the run, it’s more valuable if it is complete. People on eBay more often buy complete runs as opposed to interrupted runs. But eventually, I found that spending $2.99 on a book I didn’t enjoy was too high a price.

Now that a lot of comics push the $4 mark, I’m much more comfortable dropping a book if I don’t like it. Sure, having a big collection of a certain book feels great as a collector. However, when you lose the passion or excitement for a title but still collect it for the sake of the collection, it eventually becomes costly.

Was there ever a series you wanted to drop but just couldn’t let go? Chime in the comment section below and let me know!