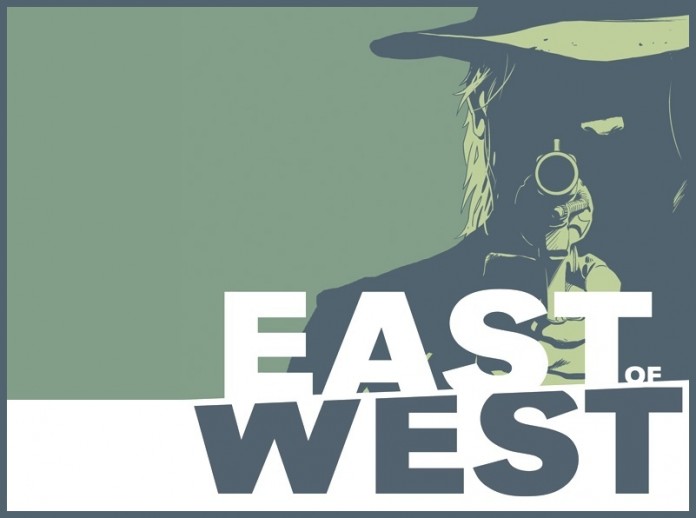 Check out Our Easy to Digest East of West Plot Summary!

Before going to Image Comics to create East of West, Hickman (writer) and Dragotta (artist) collaborated on Fantastic Four while working for Marvel. Both wished to work together on a comic again. Image Comics gave them their chance when they announced East of West at the 2012 New York Comic Con. Newsrama stated that following the story, “Can be a challenge,” but also that, “With sharp art and strong dialogue, this first issue has a lot going for it.”

I will admit that starting this series was no easy task. The beginning pages were vague and inconsistent, and I’m hoping this East of West plot summary will help clarify things for the curious beginner. However, both Bragotta and Hickman make a stunning combination of eye popping illustrations and sharp dialogue. Let me try to break down the backstory before diving into this volume specifically: East of West takes place in a dystopian future version of the United States. In this world, the Civil War never ended and the Union, Confederacy, Chinese Exiles, Native Americans, Black Slaves and Texan Separatists are locked into a never ending war. The war officially stopped when a comet struck in what we would know as present day Kansas at Armistice. All six parties met at Armistice on November 9, 1908, signed a treaty, stopped the war and created, “The Seven Nations of America.” These new nations are referred to as: Armistice, The Union, The Confederacy, The Kingdom, The Republic of Texas, The Endless Nation and the PRA of Mao. Two single yet independent prophecies occurred on the same day. These prophecies were written by Red Cloud, the Chief of Chiefs to the Endless Indian Nation, and Elijah Longstreet, a soldier in the Confederate Army under Stonewall Jackson. After either writing down their unique parts of the prophecy or reciting it orally, they collapsed and died.

For 50 years the prophecies, referred to as The Message, were left incomplete. It wasn’t until Mao Zedong of the PRA wrote an addendum to his Little Red Book which was the third piece of the prophecy, thus finishing The Message. At this time it was realized that The Message was a prophecy predicting the end of times. The Four Horsemen of the Apocalypse (War, Famine, Death and Conquest) wished to fulfill the prophecy by following The Message. Those who believed in The Message made pilgrimage to Armistice where they were killed by the Four Horsemen. Eventually, Conquest spared an infant child of one of the pilgrims and named him Ezra Orion. Ezra became the carrier of The Message and the first member of “The Chosen.” The Four Horsemen then built a structure over Armistice to prevent any further pilgrimages. There are six other members of The Chosen who are the high raking members of the 6 different nations. Their task is to bring about the apocalypse.

Things get really interesting when Death falls in love with Xiaoling (Xia), who is one of the two daughters of Mao III (leader of the Chinese nation). Death lost his interest in the mission of the Horsemen when he had a son with Xia. Ezra predicted that Death and Xia would have a child and described their son as “The Beast” who is supposed to bring about the Apocalypse. Hu, Xia’s sister, betrays Xia and the three other Horsemen take her child. Xia is told that her son was killed but instead Ezra starts to raise him to become The Beast. Mao makes a deal with the Horsemen that he will keep the existence of Xia’s son a secret from Death and in exchange, Mao gets to stay in power of the PRA (Chinese Nation).

It is unclear at which point the other three Horsemen die. Death is presumed to be dead but he’s actually being kept alive by two witches of the Endless Nation, Crow and Wolf. A decade later, Conquest, Famine and War are resurrected at Armistice as children. Death starts to seek revenge for the presumed murders of his son and wife while the other three Horsemen proceed to accomplish their mission of bringing about the Apocalypse. Thus begins the story of East of West: Volume #1. I’ll be expressing my thoughts regarding the first graphic novel collection in greater detail very soon, so check back here for my forthcoming review!