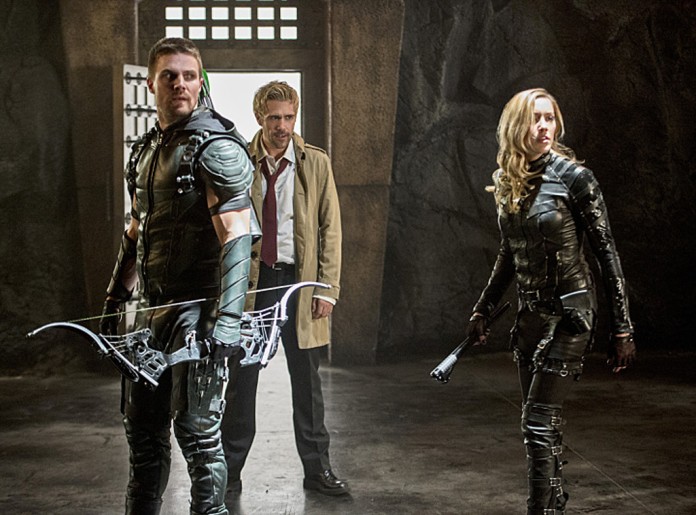 Sit Back With a Doughnut (or Donut)-Filled Protein Shake and Enjoy Our Review [With SPOILERS] of Arrow Episode 5: “Haunted!”

You know how it is truly the Golden Age of comic book TV? I’ll tell you how. A character that is cancelled on one network gets a new lease on life on another network just because it would be cool. And it was very cool as John Constantine made his CW review on this week’s Arrow.

Constantine failed to catch on for a number of reasons. Really, we can debate it for days but the bottom line is that NBC’s mystical drama failed to find a consistent audience. It did find a cult following of severely loyal fans (myself among them), but it wasn’t enough to keep the mystical drama on the air. Many factors led to the show’s demise (inconsistent storytelling, a bad time slot, lack of a binding mythology), but one thing that cannot be blamed was the performance of Constantine himself, Matt Ryan. Ryan was charismatic, rakish, intense, and engaging in every second of every episode of Constantine and that welcome trend continued this week on Arrow.

It seemed that the biggest fans of Constantine were the producers of Arrow, and they moved heaven and Earth to shoehorn the magical conman into the CW DC universe by way of Arrow Episode 5. Yeah, we’ve had mystical elements introduced into Arrow these past few seasons, from the Lazarus Pit to Damien Darhk, so it’s not like magic was a new thing. But man, did this week’s episode have to do some plot gymnastics to get John Constantine involved in the proceedings. It was like, “Oh yeah, Ollie never mentioned his charming British magic friend, but yeah, he totally met him on the Island.”

Indeed, we got treated to a flashback of Oliver Queen meeting John Constantine for the first time during the island flashbacks and boy, did it seemed forced. Not that I minded, this year’s flashbacks haven’t exactly grabbed me and I really loved seeing Ryan’s Constantine again, but it was definitely not integral to the flashback plot. It was like the writers really needed to establish the Queen/Constantine friendship quickly and had like, ten minutes of screen time to do it.

Oliver definitely needed his magical pal quickly as, back in the present, the resurrected Sara Lance (in club-wear no less) was trying to kill Thea Queen. Remember now, it was Thea that killed Sara to begin with so Sara would not rest until Thea was dead. This resulted in the former Black Canary going after innocent girls who looked like Thea, and it was up to Team Arrow to stop her.

The whole thing with Laurel lying to Oliver was dealt with and there was an attempt at some recrimination, but the whole thing was just going through the motions until Oliver called on Constantine (because, you know, they were so totally friends from back in the day) to come save Sara’s soul. And Constantine came, and Constantine was awesome as Ryan fit in perfectly with the chemistry of Team Arrow (and even had his own music cues carried from NBC which was such a great little touch). One of the story issues with magic is that, at times, when dealing with magic, stories don’t earn their conclusion. Sometimes, the magician just waves his hand, says some ominous things, and boom, the story is resolved. That’s exactly what happened this week as Constantine, Ollie, and Laurel journeyed into the spirit realm, fought three cannon fodder spirit ninjas, and saved Sara. It was silly, it was contrived, it was forced, and thanks to Matt Ryan, it was a boatload of fun. It’s a good thing for the episode that it was Constantine doing all the hocus-pocus, because if not for Ryan’s eternal charm, the haphazard plotting would have been a little harder to forgive.

Sara was back but not every member of Team Arrow had a happy ending this week. Thanks to some digging by Captain Lance and some info from Damien Darhk, Dig discovered that his dead brother was not as morally upright as he thought. Now, Diggle had to deal with the fact that his dear brother was a corrupt individual who was killed for his sins. How this will impact Diggle’s life is unclear but hopefully, it will lead to the return of Deadshot.

Thea continued to struggle with her bloodlust as it was revealed that she will not be able to be free of the Lazarus Pit’s curse until she killed Ra’s Al Ghul, which is impossible since the Demon’s Head is already dead. Now, dark Thea is becoming really played out as every season has dealt with the young woman dealing with some dark secret or dark addiction. I get that killing has replaced drugs as Thea’s addiction du jour thanks to the Lazarus Pit, but it just feels like ground that has already been covered. I wish Thea would have a new story direction now that she donned the hood.

The emotional focus of the episode was between Laurel and Oliver as Green Arrow took the current Black Canary to task for sneaking off and mystically resurrecting her sister. Laurel’s actions did seem rather rash, especially when Oliver solved the problem with one quick call to his pal John Constantine (I wonder if Ollie has any other Vertigo characters on speed dial). The Ollie/Laurel story arc was framed rather nicely by some stuff related to Ollie’s campaign for mayor. Queen’s new PR guy encouraged him to distance himself from Laurel because of the affair with Sara, but Oliver stood by his friend showing just how much he matured. I really dug the political story arc because it’s definitely some new ground to be covered. In the comics, Green Arrow always had a political bent and it’s cool to see that leak over to TV.

We will leave you with Felicity who, thanks to Curtis Holt (hey, Felicity now has her own Felicity!), discovered that Ray Palmer is still very much alive. Of course, this is something that anyone who saw the Legends of Tomorrow trailer already knows, but it was a well received series of events. The banter between Felicity and Curtis is always cool and I can’t wait to see Holt don the “Fair Play” gear. All that being said, Ray being alive (and probably really small) should add a wrinkle to the relationship between Oliver and Felicity as the ex is about to come back into the picture.

All in all, the arrival of Constantine was stuffed into the episode like one of Cinderella’s step sisters’ feet stuffed into a glass slipper, but if you let your fan flag fly, this was still a very fun bit of business.