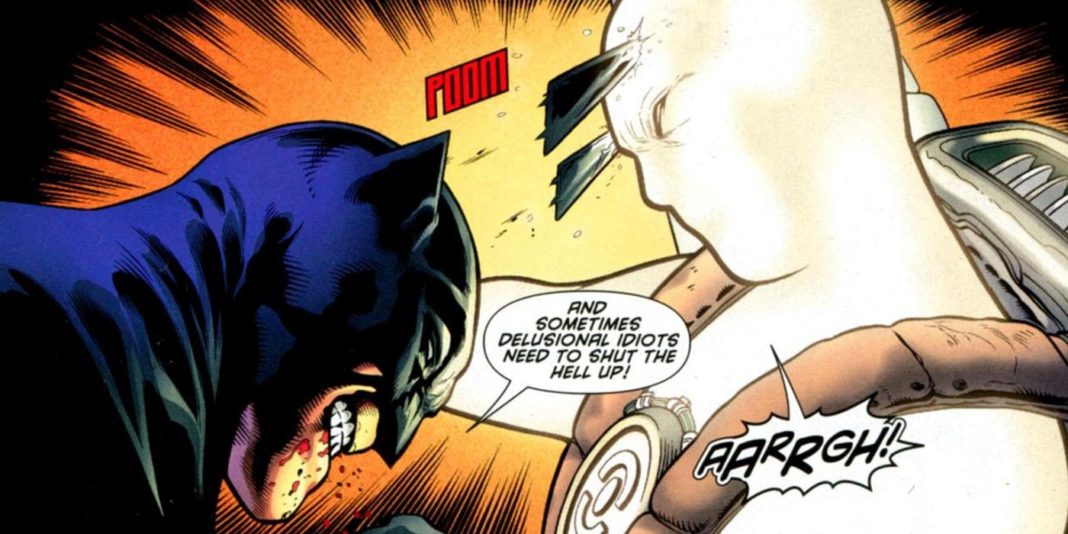 For some heroes, it’s all about the right tools for the job. When villains are on the attack, it’s helpful to be well-equipped with some of the weirdest — but surprisingly useful — superhero gadgets you’ll ever see. So, grab your ‘Bat-skates’ and ‘Chimney Sweep Arrows’ (yes, really) as we take a look at five of the strangest superhero gadgets filling utility belts, caves, fortresses of supreme quietude, and quivers.

Batman’s prepared for just about anything. Most of his best tools are in his trusty utility belt, but there’s one hiding somewhere you’d never expect — somehow, the ears on Batman’s cowl are spring-loaded weapons. While they are effective in close range fights, it’s a little weird that Batman even considered adding this feature. Oh, well — he has his reasons. 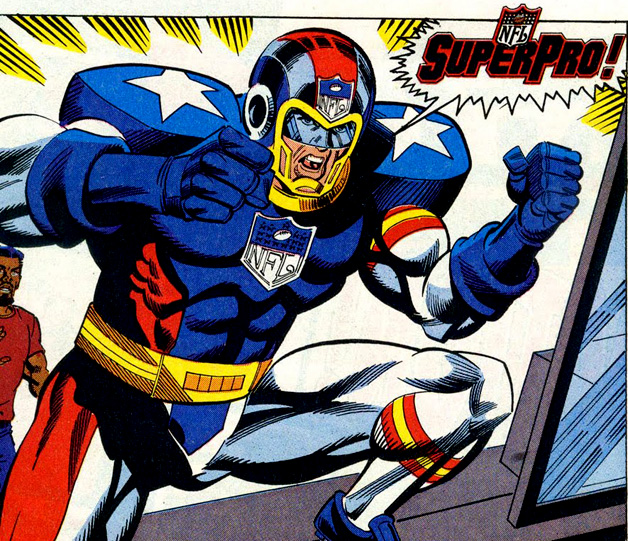 Of course, nobody would ever expect anything normal from football-themed superhero NFL Superpro! Still, this bizarre character’s weirdest piece of gear is his costume — it’s a football uniform that acts as a powerful armor!

Using this uniform, the NFL Superpro has enhanced strength, speed, and durability, which admittedly makes it extremely useful! There’s just one lingering question: why would anyone design an advanced football uniform??

The scientist who made it was a huge football fan, but that doesn’t excuse him for making it laughable. Surprisingly, the armor is just as good at catching bad guys as it is at scoring touchdowns! 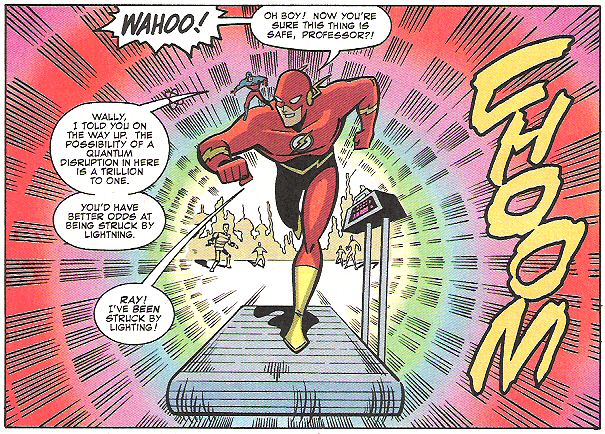 The Flash may be the “fastest man alive”, but even he needs help when attempting something beyind his skillset. When he needs to run through time or the multiverse, the Flash will increase his speed with his chuckle-inducing device, the Cosmic Treadmill!

It’s a little odd considering some speedsters don’t need it to travel through time while others do. Yet, in one way or another, this goofy gadget seems to come back when you least expect it! 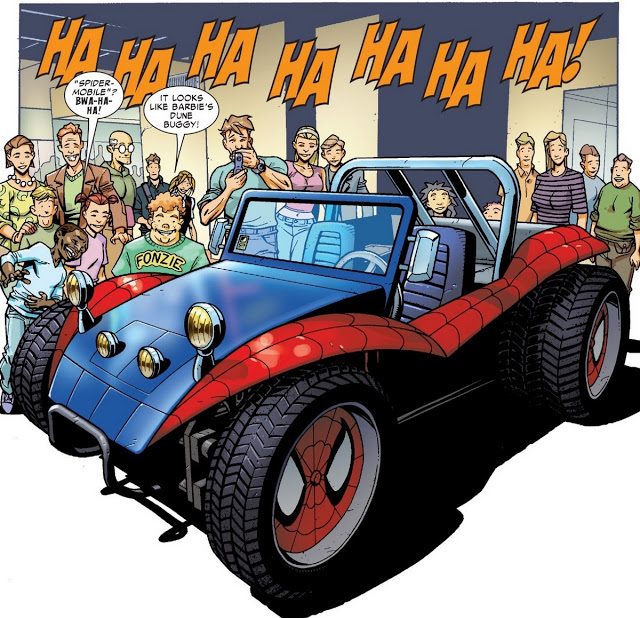 Web-swinging is Spider-Man’s main mode of transportation and it looks like a fun way to get around. So, with that in mind, I have to wonder why Spidey would travel any other way?

Well, behold the Spider-Mobile, a souped-up buggy that can actually drive on walls! While that sounds cool, the fact remains that Spider-Man doesn’t need a car. It’s like if Aquaman had a submarine — what would even be the point? Spider-Man can keep up with any high-speed chase, so the Spider-Mobile comes off as useless.

What’s even stranger is that the car has been rebuilt several times, with the latest having all kinds of high-tech gadgets. A fancy new coat of paint, sure, but it’s still as unnecessary as ever. 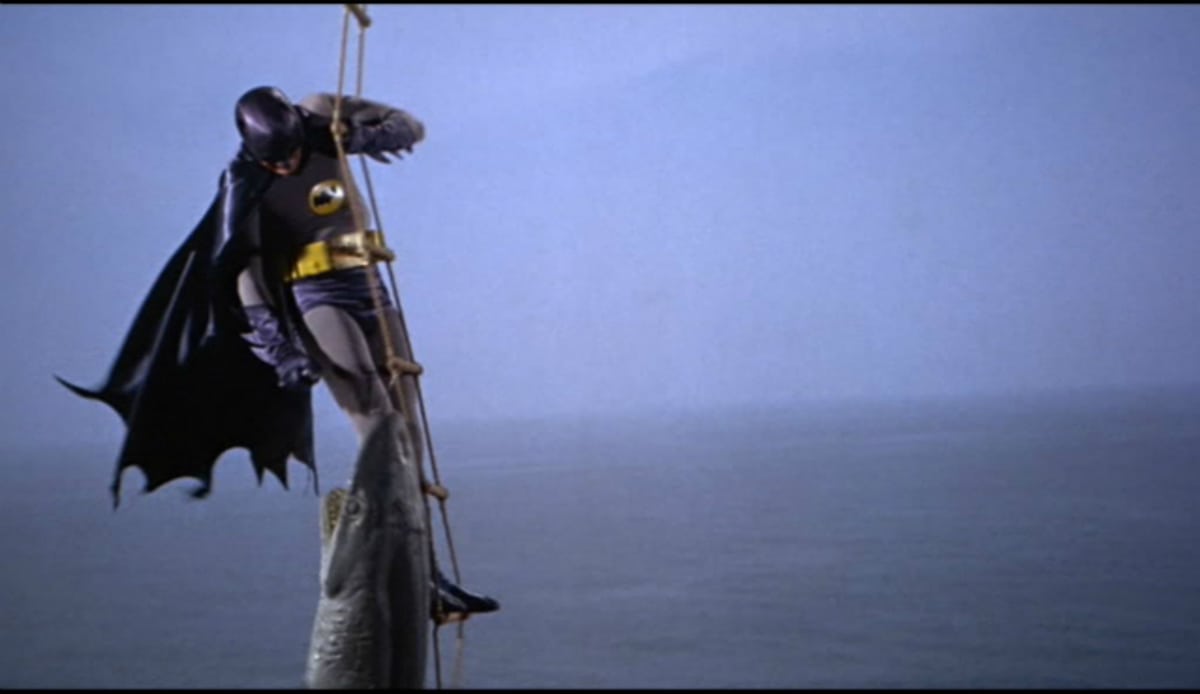 As soon as you saw the title for this article, you just knew that this one would be here —  Batman’s goofiest weapon of choice, the shark repellent spray! So many questions have cropped up since its inception: How many times has he used it? What made him develop it? What other sprays does he have? The list goes on and just thinking about it is hilarious!

It was used only once in the Adam West Batman movie, yet everyone who’s seen it still remembers it.

Was there one I missed? What do you consider the weirdest bit of superhero gear ever? Let me know below!