Home COMICS Flash and Batman Team up to Unravel the WATCHMEN Mystery in Four-Part...

The DC REBIRTH one-shot that refreshed the entire DC Comics’ line, and embraced previously excised history, presented readers with one hell of a mystery stemming from something (or someone) stealing ten years from the DC universe and casually retconning characters out of existence (specifcally, Wally West, who refused to phase into obscurity).

Besides Wally’s jarring tale shared with Barry Allen, and in turn, Batman, an artifact validating this time/space manipulation embedded itself into the Batcave’s walls. The artifact in question? That would be the Comedian’s blood-stained, smiley-face button, linking the events of DC REBIRTH to Alan Moore’s seminal study on superheroes, Watchmen.

If you’ve been chomping at the bit to see movement towards this mystery’s resolution, I suggest you give the chomping, and your currently overtaxed teeth, a break — this April, DC Comics presents “The Button,” a four-part story arc delving deeper into the apparent Watchmen connection, presented throughout issues #21 and #22 of Batman and The Flash.

Brought to you by Batman writer Tom King and artist Jason Fabok, along with The Flash writer Joshua Williamson and his artistic cohort Howard Porter, “The Button” unites the two greatest detective in the DC universe as they struggle to understand the meaning of the formerly embedded, smiley-face button.

According to Dc.com, this “simple investigation soon turns deadly when the secrets of the button prove irresistible to an unwelcome third party – and it’s not who anyone suspects! This is a mystery woven throughout time, and the countdown starts here!”

Besides the $2.99 standard covers for Batman and The Flash hitting in April and May, each of the four issues will offer a $3.99 lenticular cover rendered by Jason Fabok. 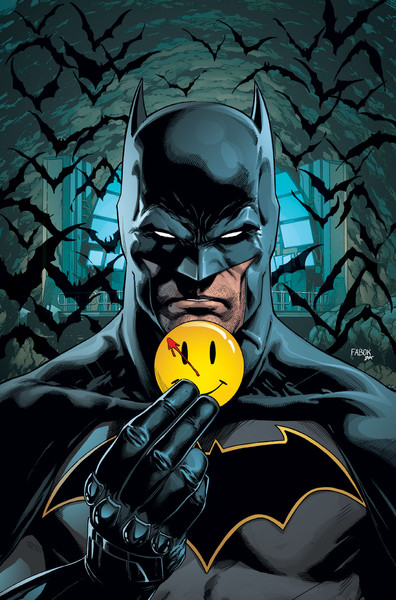 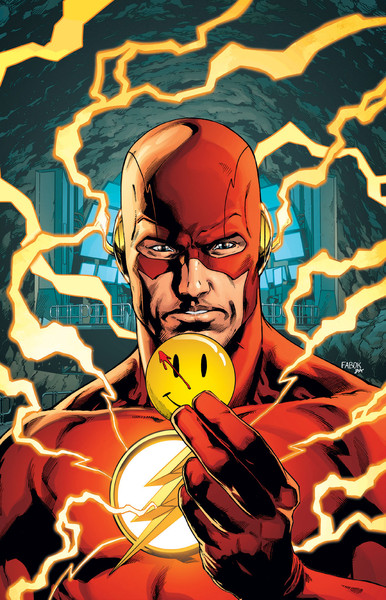 So, ready to confront that dastardly Dr. Manhattan and his callous continuity noodling? SOUND OFF!