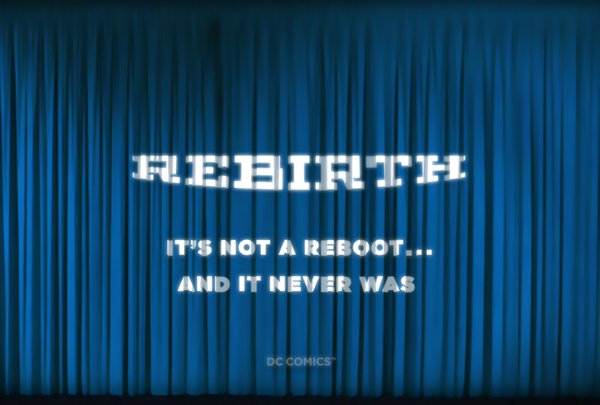 So Geoff Johns, Chief Creative Officer at DC Comics, newly appointed co-head of DC Films, and one hell of a comic book writer and historian, really, REALLY wants you to try DC REBIRTH #1, the 80-page one-shot kicking off the new DC Comic universe currently unafraid of its intriguing continuity. Why does he want you to try it? Because he really, REALLY likes it. In fact, he likes it so much, he’s nearly certain you’ll like it, too. And if you don’t, he’ll refund you for it. Personally. Yes, if this is your first foray into comics – or your attempt to stay interested as a regular collector – and the proper brain-buttons aren’t pushed, Geoff Johns will personally refund you for DC REBIRTH #1.

“It’s $2.99 for 80 pages. It’s not a lot,” Johns told our friends at Comicbook.com in an interview. “If anyone wants to check out comics, wants to check out DC Universe Rebirth #1 and doesn’t like it, they can mail [the comicbook] to Warner Bros., to me, and I will send them a check, I literally will, for both postage and for the book. I will buy all these books back because I believe in this issue a lot. I think it’ll do very well. I hope it does well. But I seriously will, I’ll buy back this book.”

Unfortunately, Johns needs to step away from writing comics as his CCO and DC Films responsibilities take up an already adequate amount of his very valuable time. However, Johns made sure to grant his final bit of comic book focus to DC REBIRTH #1. Why? Because Johns absolutely LOVES these characters.

“The only reason I write these characters is because I love them. The only reason I want to spread the gospel of these characters is because I love when – like, when Blackest Night happened, suddenly a lot of people were like, ‘I like Mera!’ I was like, ‘Me too, that’s why I put her in there!’ And New 52 launched and people were like, ‘wow, I like Aquaman AND Mera!’ (laughs),” Johns explained.

“It’s all about connection,” Johns said. “I think a lot of people who are into this stuff like us, when I was in school I met my best friend because he was reading comic books. We made a connection through comics, and then I had a best friend in high school, who I’m still friends with. The chance to write a love letter, to put so much into this, it really felt like, ‘okay, if I have to take a step back from writing comics for a bit,’ I felt like this was a great opportunity to say thanks through a comic book. I think the compass of Hope and Optimism is in DC’s DNA and it’s important to get that out there.”