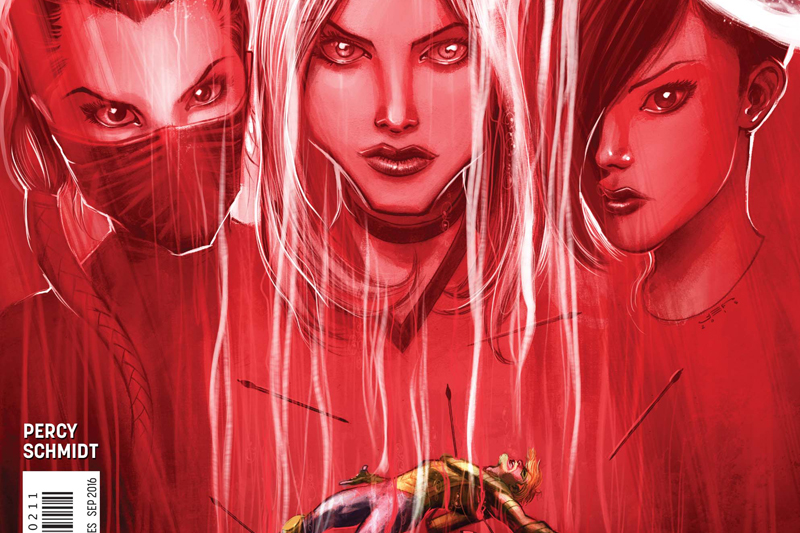 Check out Our Review [WITH SPOILERS] for Green Arrow #2!

If I was a higher up in a major comic company, I’d be offering Benjamin Percy and Otto Schmidt the keys to some very big projects, because this writer and artist combo knows how to make some good comics.

For example, there is Green Arrow#2, the latest “GA” installment of the Rebirth era. Now, the Rebirth one-shot published last month didn’t overly impress me, but the last two issues sure did as Percy and Schmidt continue to take elements from TV’s Arrow and combine them with a classically toned “GA” tale.

Issue #2 sees the return of one Andy Diggle and that’s just the tip of the iceberg as far as the goodness of this issue. I was looking forward to more reveals about the returned Shado and the abducted Emiko this issue but these two ladies only appear in the opening. The rest of the issue recounts the search for the presumed dead Oliver Queen while Fyfe, Ollie’s right hand tech guy, must nurse Oliver back to health. Percy took this opportunity to write Fyfe out of the book, so Oliver Queen is going to need a new tech genius on his side. Hmm, who might that be?

Anyway, the issue does get a bit overwrought with some of the dreamlike purple prose as Oliver must metaphorically climb out of hell to return to the land of the living, but this could be overlooked because this issue feels like a good episode of the show combined with a Green Arrow: Longbow Hunters sensibility that was a pleasure to read.

I’m going to keep saying this: Green Arrow was one of the worst New 52 books of the lot (excluding the all too short Jeff Lemire run), so it is a pleasure to read a Green Arrow story this darn good and this faithful to the character’s history. And yes, Dinah fans, you do get a few Black Canary pages gorgeously rendered by Schmidt.

Really, this is good stuff that rivals the last half a decade of “GA” in comics.