There’s more to life than Marvel and DC—things like half-spider bounty hunters, punk-rock ghosts with their guts casually hanging out, and royal princes with TVs for heads. If you’re thinking all these are incredibly ridiculous, you are right—these are ridiculously good, and this is what Saga is all about. Brian K. Vaughan and Fiona Staples have created a masterpiece that’s one for the books, and if you’re not yet reading this intergalactic collection of awesomeness, you are missing out on half of your life. So, without further ado, here are 5 reasons why you should read Saga!!

There’s sex, drugs, and brutally gory deaths. Nope; it’s not about dramatic family feuds that involve bitch-slapping each other on national TV, but it is about bitch-slapping each other in ways only an intergalactic war can bring. At the heart of the story are our protagonists Marko from Wreath and Alana from Landfall—two star-crossed lovers who are simply trying to raise a family. Sounds simple enough, right? The problem is that the whole thing is set against the backdrop of an interplanetary war that’s been going on for ages, and since our adoring couple come from both warring worlds, their baby is basically considered an abomination that should not be allowed to exist.

Cleaning up after baby poop is bad enough, but Marko and Alana have to keep their little family safe from those who are trying to kill them—which is practically everyone in the universe. Add that to the growing list of dead bodies they encounter while on the run and you’ve got yourself a comic book that’s as addicting as morning bacon on a warm, sunny day (or any day, for that matter).

Saga is a delightful treat if you’re a fan of Star Wars, and if you’re not, which planet did you say you were from again?

Marko and Alana are two soldiers who fall in love despite being on the opposite sides of the war, and their new daughter Hazel is in constant danger of being hunted down by all kinds of factions. We meet a colorful variety of different characters along the way, but it’s best not to get too attached to your faves. They. Will. Die. No one is safe. There is no mercy in Saga, and just when you think you’re starting to like someone, their heads get blown off or their bodies are ripped apart by a masturbating dragon. I kid you not.

Okay; I know I just mentioned a dragon with a particular penchant for his boy parts, but trust me—Saga is more real than anything. It deals with real-life issues where the characters—albeit as sci-fi as they can get—react in the most realistic and believable ways. Even their dialogues are all too familiar, as these things can easily be happening to someone we actually know. Does not the real world have child prostitution, illegal slave trades, and scandals with royalty? Do actors not sometimes turn to prohibited drugs just to deal with the pressures of life? Do we not sometimes mourn the loss of our exes too much that we overlook the fact that we’re actually falling for coworkers and friends who’ve been there all along? And do husbands and wives not argue about finances when their jobs are barely keeping them afloat? That’s Saga and more—plus beautiful artwork of a breastfeeding mom on the cover. Yup.

There are no cliched characters here—Saga is as authentic as it gets, and a lot of times it’s hard to take sides and spot the difference between what’s good and evil. Much like things are in real life, nothing is black and white in the comics, and these gray areas are what make the characters so rich. Their background stories give clear insights into their motivations. Even a half-spider, half-topless woman bounty hunter (with a cool name like The Stalk) knows how to love, too. And Prince Robot IV, with his perverted addiction to sex and orgies, wants nothing more than to be home in time for the birth of his child (TV-head included).

Popular enough that they’re actually releasing a plushie version of him, Lying Cat is basically a walking lie detector. This loyal partner to the bounty hunter named The Will is all about the truth, and it can sense your BS miles away. With an annoyed smirk, Lying Cat stares at you and mutters “lying” to make you wish you’d never opened your mouth in the first place. Honesty is the best policy, after all. 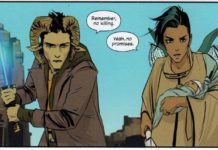