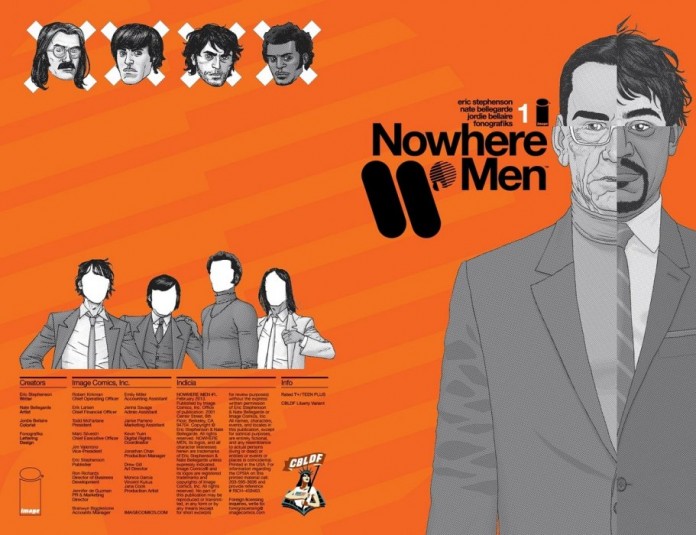 Welcome to our very first EXCLUSIVE interview right here on The Source! YAY! The impetus behind this particular interview with Image Comics’ Publisher, Eric Stephenson, was to garner a bit of knowledge regarding a Publisher’s responsibilities. Why? Because there are a HECK of a lot of positions out there in the comic book industry besides Writer, Penciler, Inker, Colorist, etc. That’s right; you might not be able to write yourself out of a paper bag, or draw a discernible stick-figure, but maybe, just maybe, there’s another position in the comic book industry that’s perfect for your unique, surprisingly satisfactory skill sets!

And just to clarify, I’m not saying you can’t write or draw, nor am I implying the interviewee can’t write or draw. I mean, have your read Eric Stephenson’s Nowhere Men? No? Well, you really, really should. Again, the impetus is to spotlight the many other jobs currently existing in the comic book field; if you’re not a writer or artist, there are plenty of positions available to help get your foot in the door (so to speak).

So, without further ado, here’s our exclusive interview with Image Comics’ Publisher, Eric Stephenson, in the first part of our informative – and hopefully recurring – series, “The Many Exciting Careers in Comics.”  Enjoy!

Way back in the 20th Century. Incredible Hulk #192 was the first comic that caught my attention, more because of an ad in the book than anything else. There was an ad for a Marvel convention and it had this great John Buscema poster of all the Marvel characters. I was fascinated by all these characters I’d never seen before, and I started asking my parents for more comics as a result.

Just enthusiasm for the medium, really. I started out wanting to draw, and then later realized I just didn’t have the patience for that. I enjoyed telling stories, though, and I loved the fact that comics was capable of so much as an artistic medium. As a teenager in the ‘80s, there was a real explosion of creativity across the board in comics — so much great work being generated everywhere by everyone — and I wanted to be part of that somehow.

4a. When did you decide you wanted to create, and be a part of creating, comic books?

The very first thing I ever did in the comics industry was some freelance writing for Wizard magazine. It was a good experience in that I met Jim Valentino and became friends with him, leading to him asking me to become his assistant when Image launched. On the down side, I don’t think I got paid for everything I did at Wizard, though, and the stuff I did get paid for, I kind of had to drag out of them.

Well, I became Publisher in July 2008, so quick math says seven and a half years.

Charting the course for the company. Approving titles for publication. Managing the Image staff. Those are the main priorities, I’d say.

Hands down, that would have to be reading some pretty great comics before anyone else! Saga, Monstress, Black Science, Deadly Class, Sex Criminals, The Wicked + The Divine, The Walking Dead, Huck, Plutona, you name it. We publish so much great stuff, and being able to watch it all come together and then read it before it’s out in the wild — that’s pretty awesome.

Dealing with an ever-changing marketplace, I think. On one hand, it’s fun — nobody wants to just coast through life, so challenges are good, they’re invigorating — but comics is like any other job and each day has its ups and downs, its frustrations. Comics are in a period of transition right now, I think, so there’s a lot to do and a lot to consider as we look to the future. Transition equals opportunity, though, so whatever frustrations come with the changes, it’s all worth it in the long run.

Strong instincts. Common sense. Having a writing background helps to a certain degree, I suppose, but I’m not sure it’s entirely necessary. I definitely didn’t have any formal training in terms of business, though — it’s all stuff I’ve picked up along the way. To a certain degree, I think not having a business background has helped, because I’m less beholden to how things “should” be done, you know?

11a. What’s the preferred level—and type—of education for a potential publisher?

Beats me. I didn’t originally set out to be Publisher myself, so it’s not like I went to school with this job in mind.

Some companies offer internships, and I know people who have come up in comics that way. It’s different depending on the company, really, and what each companies needs are. The best thing to do is look at the various publishers’ websites and see what positions they’re actively looking to fill. Beyond that, there’s always talking to publishers’ staff at conventions and asking about what’s available.